New technology allows irises to be scanned from 40 feet away. Is this a wonder weapon against crime and terrorism or a way for governments to invade our privacy and track our movements?

Imagine if you could be identified with certainty from 40 feet away by anyone with a special camera and your iris scan in a database. Carnegie Mellon researchers at the Cylab Biometrics Center have invented a device that can do that. It should definitely have criminals feeling nervous, but maybe we should all be nervous.

First the good news. According to SRI International, a spinoff of Stanford Research Institute, iris scans are 1,000 times more accurate than fingerprint scans. We're already using handheld iris scanners in high security situations. The new Carnegie Mellon device will work up to 40 feet away -- even in a mirror -- so, for example, a police officer making a traffic stop can safely identify a potentially dangerous suspect before he even exits his vehicle.

The whole system works with fewer false positives than fingerprints, and it's effective at the same general range as facial recognition. (Facial recognition famously failed during the Boston bombings because no pictures were close enough.) Here it is in action:

Here's the bad news. At 40 feet away, the government could now (or soon, because this version looks like it needs some focus time and for you to sit still a bit) scan crowds of people for "irises of interest" and literally troll a city street for "the bad guys." Even the most security-minded person probably feels a little strange about that, especially when you consider that irises can be scanned passively.

For now, this isn't a major threat because if your iris has never been scanned, no one can identify you. The FBI has at least 104 million fingerprints in its database -- 70 million of which are from criminals. It has no known iris database, though it has experimented with the idea.

[ Not everything that helps the government has a dark side. Read 4 DARPA Projects We Love. ]

What if you scanned a city street daily? You may not be able to identify whom all the irises belong to, but you could say, "The same iris, which we now call Iris 543-X, walks by here at roughly the same time every day." The assumption, then, is that Iris 543-X belongs to someone who lives or works in the area. As thousands of irises are scanned and stored, eventually a giant database could be created to track the movements of every iris that walks in front of a camera. Eventually, you're going to identify Iris 543-X, especially if Iris 543-X can be cross-matched to facial recognition software or other forensic databases. 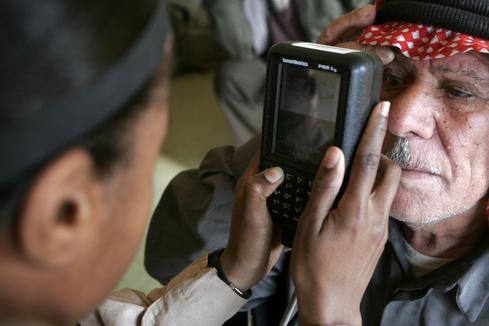 Pretty soon, with a handful of cameras in the right areas, the numer of irises captured and stored could easily surpass the 140 fingerprints in the FBI's database. Sounds scarier now, right?

Now imagine using it in retail to track shoppers to offer them "deals," or in education to track students in the name of security. The opportunities are endless, as are the chances to violate someone's privacy and civil liberties.

This is a perfect example of a technology that can save lives if used sparingly, and cost us great freedom if used too much. Who makes the decision how much to use it? Not us.

Are iris scans a wonder weapon against crime and terrorism or a way for the government to invade our privacy and track all of our movements? What do you think? Tell us in the comments section below.

David has been writing on business and technology for over 10 years and was most recently Managing Editor at Enterpriseefficiency.com. Before that he was an Assistant Editor at MIT Sloan Management Review, where he covered a wide range of business topics including IT, ... View Full Bio
We welcome your comments on this topic on our social media channels, or [contact us directly] with questions about the site.
Comment  |
Email This  |
Print  |
RSS
More Insights
Webcasts
Detecting and Preventing Insider Data Leaks
Nip Ransomware in the FUD: Detecting Attacks Pre-Encryption
More Webcasts
White Papers
Why Add Security to Your Skill Set and How to Do It
Protection Strategies for a Cyber-Resilient Organization
More White Papers
Reports
Improving Security by Moving Beyond VPN
Are Unprotected Cloud Databases Leaking Your Data?
More Reports

@StaceyE- Of course, that's a short term solution as I'm sure the camera will be developed to defeat that, especially when the DARPA grant suddenly appears in their account.
Reply  |  Post Message  |  Messages List  |  Start a Board

Yes, I think a quality pair of sunglasses would be in order....
Reply  |  Post Message  |  Messages List  |  Start a Board

@zerox203- You are right that it still needs some time and improvement to be a real threat. Though I'm sure they could network it as opposed to hooki it to the laptop quite easily. I think right now, the fastest way to defeat it is probably just a pair sunglasses. but as far as this has come, I can't imagine it takes too much longer.
Reply  |  Post Message  |  Messages List  |  Start a Board

I think it's a great idea. I don't like the idea of anyone who isn't a Medical Professional putting anything anywhere near my eyes, and this will make it unnecessary. I wonder if this will mean, eventually, that we won't have to carry credit cards or ID, because we will be instantly and unambiguously identifiable? There are more and more women from backward nations that come to America who cover their faces, now, they too, can no longer be anonymous - whether they or anyone else likes it or not.

"Are iris scans a wonder weapon against crime and terrorism, or a way for the government to invade our privacy and track all of our movements?" Well, as you point out, at current, they're definitely neither. On top of taking a while and possibly requiring you to hold still, the setup in the Carnegie Mellon experiment seemed rather bulky and required connection to extra equipment, like a laptop. It would be pretty hard to have one of them scanning you without you noticing. Now, naturally the technology will get smaller and faster as more research goes into it, but it seems like that's still a ways off.  The technology is cool, and any conjecture is purely hypothetical, but this certainly still speaks to growing concerns about privacy in our time.

The concern is there - corporate interests, in particular, have been lnclined to to take a 'shoot first and ask questions later' approach when it comes to as-yet-unregulated means of tracking customers. Think of the controversy surrounding anonymous WiFi tracking at retail outlets like Nordstrom's to see how long people remain in-store, etc. As you point out, this represents a hypothetical new ballgame, where their database could remember you even if you walk into another store of theirs on the other side of the country. To be honest, I'm skeptical even of law enforcement having access to this. Because it operates without the scanee's knowledge, it seems more prone to abuse. Even if a warrant or special permission were required for it's use, if it was used without one, who could prove it?
Reply  |  Post Message  |  Messages List  |  Start a Board
Editors' Choice
Hot Topics