How Microsoft Surface Pro Won Me Over - InformationWeek

How I learned to stop worrying and love Windows 8.1 and the Surface Pro.

My six-year-old laptop is dead.

But don't cry for me, Argentina. My precious data is stored in Dropbox and Microsoft OneDrive clouds, so it's a small jump to new hardware.

I don't have the patience to figure out the many things wrong with my Windows 7 Toshiba, circa 2008 (with humble beginnings as a Vista machine). It's painfully slow, and it freezes up whenever I try to open a browser. To that I say, good night.

[The Surface line is here to stay. But are changes coming to Microsoft's device strategy? Read Surface Pro's Future: 5 Facts.]

But what do I do now? Should I throw down $1,000 for a MacBook Air? Nah. I'm leaning toward an affordable Windows 8.1 Ultrabook...

Oh, wait, what's that on my shelf? Is that a first-generation Surface Pro eval unit hanging around? Maybe I will try that in a pinch.

I'd been tinkering with this Surface Pro off and on -- I set up tiles on the Start screen, added browser favorites on the desktop side, learned my way around all the settings, and even did a video review. My early interactions with Windows 8 and Surface were a bit frustrating. The forced effort to be a tablet and laptop in one device puzzled me and other consumers and IT pros. But I resisted it as my primary device mainly because my stuff was on my old Toshiba, and Windows 7 was good enough. 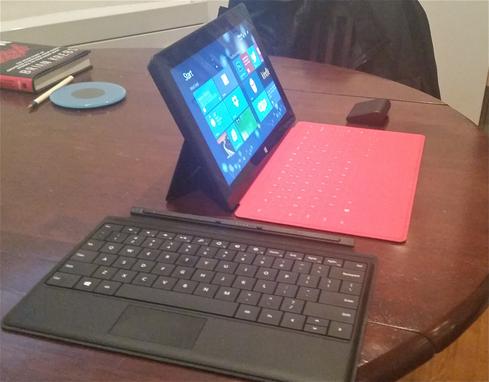 Well, not anymore. My neglected Surface Pro now has a starring role in my life, along with accessories like a Bluetooth mouse, keyboard covers, and a monitor cable. And I'm taking to the Surface Pro like a duck to water.

I'm also eating a piece of humble pie. I've been critical of Windows 8 and Surface both here at InformationWeek and at my previous job -- and with good reason. The split personality of the OS's desktop mode and touchscreen mode is awkward to navigate at first. The original Surface Pro was boldly overpriced ($1,120 for the 128GB version when adding the $120 keyboard cover). Prices for the new Surface Pro 3 are roughly the same, but at least the Pro 3 is lighter, and has a bigger screen and a more adjustable kickstand. It still seems petty that Microsoft charges $120 extra for a keyboard cover. But I digress.

The negative Windows 8 reviews are well known at this point, and sluggish Surface sales remain to this day, though Windows 8.1 device sales have risen this fall.

One of my main criticisms was that Surface Pro/Windows 8 tries to solve too many problems at once. But the patient user will see past this flaw when he or she sets up shop. I personally use the desktop mode most of the time, and, thanks to a quick and free upgrade to Windows 8.1, I can now boot directly to the desktop. I still jump back and forth between the desktop and touch tiles for Gmail, Twitter, or plain-old web browsing. Living within touch apps and a traditional desktop on the same machine can be disorienting, but once you get used to it, things just sort of... blend.

Speed is also a huge plus. The lightning-fast boot-up and boot-down times are not what I'm used to with a laptop. Web pages and touch apps load instantly, which is refreshing.

My interaction with Office 365 has also been positive. I purchased a year-long subscription for Office 365 Personal for $69.99, which gives you automatic upgrades to the latest versions of Word, Excel, etc., along with 1 TB of OneDrive cloud storage (one terabyte!), the ability to save docs directly to OneDrive, and additional access to Office docs on one smartphone and one tablet using the Office Mobile app. It was a kick to save a Word doc to OneDrive on the Surface Pro and edit it with full Word capabilities on my Android phone 30 seconds later.

OK, I'm sounding dangerously like a Microsoft commercial. So let me just say that Windows 8 and Surface Pro are still a clumsy attempt at a one-size-fits-all user interface, but they will reward the adaptable user who's comfortable jumping from web browser to mobile app and from touchscreen to mouse. There's enough in the toolbox here to satisfy most users. It took a dying laptop for me to learn this, but I'm glad I did.

So, knowing what I know now, would I buy the Surface Pro 3 over the comparably priced MacBook Air? Yes. But include a damn keyboard cover, will ya?

Shane O'Neill is Managing Editor for InformationWeek. Prior to joining InformationWeek, he served in various roles at CIO.com, most notably as assistant managing editor and senior writer covering Microsoft. He has also been an editor and writer at eWeek and TechTarget. ... View Full Bio
We welcome your comments on this topic on our social media channels, or [contact us directly] with questions about the site.
Comment  |
Email This  |
Print  |
RSS
More Insights
Webcasts
Securing and Monitoring Networks in the 'New Normal'
What We Can Learn from Sports Analytics
More Webcasts
White Papers
The Essential Guide to Securing Remote Access
Passwordless: The Future of Authentication
More White Papers
Reports
The State of Threat Detection and Response
The Drive for Shift-Left Performance Testing
More Reports

When I take my Surface Pro into the living room, I leave my Power Cover behind. I may not spend all my time in Metro UI but it still fits the information-consuming device model of a tablet.
Reply  |  Post Message  |  Messages List  |  Start a Board

Not my first tablet. But this is my first SSD laptop that runs like a tablet. I don't consider the Surface Pro a "tablet" given how the iPad, Kindle Fire, and Google Nexus have come to define what a tablet is. I look at the Surface Pro as a lightweight laptop with a touch-screen, an app store, and tablet-like features.
Reply  |  Post Message  |  Messages List  |  Start a Board

"A solid-state drive is the single most important component for a positive user experience with a device." This is so true that I have even replaced all of our family's laptops as well as all my work laptops with SSDs. It supercharges most modern PCs to an amazing experience. So can anyone tell me why the manufacturers don't get this? Most laptops sold today should have a SSD upgrade option, it would be money very well spent. Yet, SSDs are usually relegated to the high-end models
Reply  |  Post Message  |  Messages List  |  Start a Board

I can see this is your first tablet. After a few weeks you'll break it in and it will run even slower.
The lack of apps that you can install is a problem for me. Glad you got the keyboard or you would have went from typing with ten fingers to just one. I like my tablet, but it went from being on the work desk and just sat there, to being fulltime in the bathroom as my toilet device, so I'm happy.

This is my first prolonged exposure to a "laptop" with SSD, so I feel like I'm driving a Porsche.
Reply  |  Post Message  |  Messages List  |  Start a Board

>The lightning-fast boot-up and boot-down times are not what I'm used to with a laptop.

A solid-state drive is the single most important component for a positive user experience with a device.
Reply  |  Post Message  |  Messages List  |  Start a Board
Editors' Choice
Hot Topics