Google convinced the arbiters of all things emoji to add more professional women, and women of varying skin color, to the next batch of characters.

Emojis may have started with a simple set of characters depicting a small handful of base emotions, but they have become a big part of how people communicate online and within apps. You may consider emojis to be trite, the fodder of teens, but you'd be mistaken. Emojis are here to stay, and, thanks in part to Google, are about to become more diverse.

Earlier this year, Google submitted a proposal to the Unicode Consortium's Technical Committee to offer a wider range of emojis for women in the workplace. Google argued too many of the existing sets of female emojis were limited to traditional gender roles, such as nurses or hair stylists, while men were given roles such as doctors and police officers.

"More than 90 percent of the world's online population use emoji," said Google in a blog post. In fact, nearly eight in ten women use emojis frequently, according to AdWeek, with 18- to 29-year-olds the heaviest users.

Don't think for a second that older folks aren't using emojis. Three out of five people over age 35 say they use emojis frequently. "But while there's a huge range of emoji, there aren't a lot that highlight the diversity of women's careers, or empower young girls," Google said. 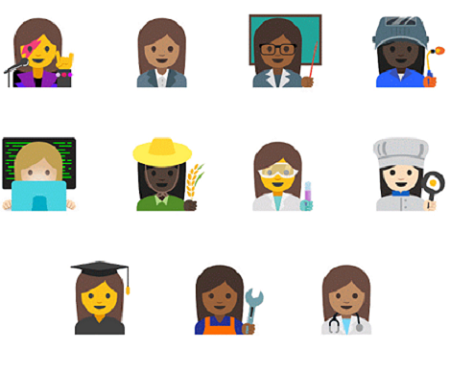 Use of emojis is not limited to cellphones. More than 50% of working professionals admitted to using emojis in workplace email, according to a survey conducted by OfficeTeam. Surprisingly, managers and bosses approve. Bosses, it turns out, use emojis to come across as less authoritarian or soften the blow when assigning onerous work tasks.

Google proposed 13 new emojis in May that depict women in a variety of careers, including manufacturing, industry, healthcare, technology, business, education, food service, farming, and music. (Google paired this set of working women emojis with the corresponding male emojis for standardization purposes.) Google also suggested these professional female emojis should be available in all skin colors, so allowing people to find the one that represents them the most accurately.

The Unicode Emoji Subcommittee agreed Thursday to add 11 of Google's suggestions, with all the available skin tones. Further, it also agreed to create female and male versions of 33 existing emojis. Together, these changes will make close to 150 new professional emojis available to women of all colors.

The new emojis won't show up right away. The Unicode standardization process is somewhat sluggish. For example, the Unicode Consortium first proposed Unicode 9.0 in June 2015 and only last month approved the full set of emojis to be included in the standard. Unicode 9 targets hand gestures (call me, fist bumps, facepalm), animals (bats, sharks, eagles), and food (avocados, bacon).

Unicode will build the new professional women into a future, undesignated version of the Unicode standard. Hopefully, it won't take a full year to release the final set.