The updated Google Nest thermostat can now sense your presence from across the room.

The Nest Learning Thermostat has learned a new trick: It lights up and displays the temperature or the time when you walk into a room where the device is located.

Nest calls this feature Farsight, and it's available in the newly released third-generation Nest Thermostat. Earlier iterations of the product self-illuminated only when someone passed within two or three feet of the device.

The latest Nest Thermostat has been redesigned. It protrudes from the wall less, thanks to its reduced profile. It features a larger display with higher resolution -- 229 pixels per inch (PPI), 25% more than the previous generation. This makes temperatures displayed through Farsight sharper and easier to read when viewed from afar. 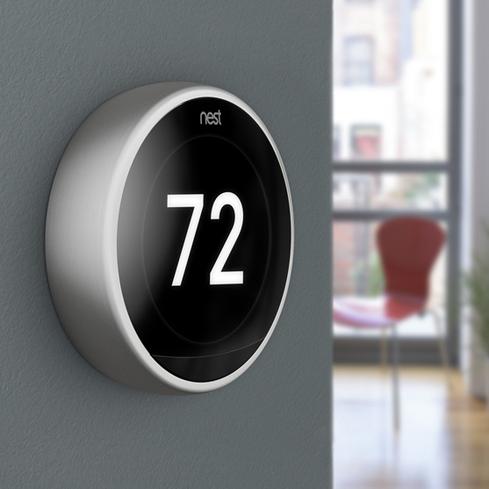 Most furnaces include an automatic shutoff function to avoid overheating. The Nest Thermostat has been programmed to monitor shutoff events. If it detects a pattern, it will display a Heads-Up alert on-screen and in the Nest app twice a year, and will include a notification in its monthly energy report email message.

[Read about the history of Google and what the Alphabet name change means.]

According to Nest, its thermostat has helped people save over 4 billion kWh of energy in millions of homes around the globe since 2011. Based on studies that suggest the device can save 10%-12% on heating bills and 15% on cooling bills, the company claims its thermostat pays for itself in two years or less.

The third-generation Nest Thermostat is available from Nest.com, Amazon.com, and BestBuy.com.

The company says it will be available soon at Best Buy locations, the Google Store, Lowe's, Home Depot, Sam's Club, Target, and Verizon Wireless at a suggested retail price of $249. The second-generation Nest Thermostat is now being offered at $199 at select retailers.

Thomas Claburn has been writing about business and technology since 1996, for publications such as New Architect, PC Computing, InformationWeek, Salon, Wired, and Ziff Davis Smart Business. Before that, he worked in film and television, having earned a not particularly useful ... View Full Bio
We welcome your comments on this topic on our social media channels, or [contact us directly] with questions about the site.
Comment  |
Email This  |
Print  |
RSS
More Insights
Webcasts
People Are The Most Important Part of Autonomous SOC
Don't Miss This Cybersecurity Virtual Event
More Webcasts
White Papers
Tech Insights: Detecting and Preventing Insider Data Leaks
Accelerate Threat Resolutions with DNS
More White Papers
Reports
The Infoblox Q4 2020 Cyberthreat Intelligence Report
Accelerate Threat Resolutions with DNS
More Reports
Copyright © 2021 UBM Electronics, A UBM company, All rights reserved. Privacy Policy | Terms of Service