Think big or go home. Google's pursuit of moonshots -- radical solutions to huge problems using breakthrough tech -- has encouraged others to launch their own projects. Here are eight worth watching. 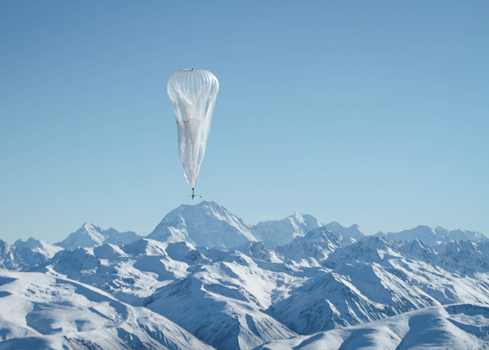 Google's affinity for moonshots -- big problems addressed with radical solutions -- first showed up in 2010 when the company began talking about self-driving cars.

As reports about the company's skunkworks, Google X (now simply X in the wake of the Alphabet reorganization last fall), surfaced a year later, the moonshots multiplied.

Under Alphabet's corporate umbrella, X is shepherding only a handful of hopefully revolutionary projects. Beyond self-driving cars, there's Project Loon, an effort to provide Internet connectivity through network hardware suspended on weather balloons; Makani, a startup providing power derived from large, tethered kites that function as wind turbines; and Project Wing, which aims to deliver goods to customers using drones.

There may also be undisclosed moonshots, such as a reported effort to build better battery technology. And of course there's the $30 million Google Lunar XPRIZE, which aims to fund an actual moon shot.

Google also has a separate research group, the Advanced Technology and Projects (ATAP), which is pursuing initiatives like Project Ara, a modular smartphone platform, among others. ATAP's work is a bit more focused than X's research, but it's ambitious in its own way.

Some of X's projects have graduated from the lab. They may not yet have reached the moon, to so speak, but commercialization is underway.

Google X Life Sciences, responsible for Google's Smart Contact Lens and other health-oriented initiatives, has become a distinct Alphabet subsidiary, Verily. Google Glass crashed and was reborn as Project Aura, which has yet to reveal its revised wearable hardware. A computational photography project called Gcam has been moved under Google Research. Google Watch got folded into Android Wear. The indoor mapping effort known as Project Insight has been absorbed by Google Maps. The eerily named Google Brain, an effort to help machines understand images, audio, and text, has been integrated with Google Research. A sustainable architecture project called Flux has been spun out as a new company. And Project Tango has become part of ATAP.

That's a lot of innovation for one company, even if it's now spread across multiple Alphabet subsidiaries. But it goes beyond one company. Google's willingness to take aim at the moon has become a model for other innovators.

In 2012, Google created We Solve for X as a moonshot community. It's a think tank of sorts, an organization that aspires to address significant problems with unconventional thinking. Google of course didn't invent revolutionary aspirations, but its can-do technical ethos offers a convenient template for like-minded organizations and individuals. Participants include the American Association for the Advancement of Science, the IEEE, TED, and other organizations.

Here's a look at the future as it might be, if any of these moonshots strike their marks. Scroll through and let us know what you think of these projects, in the comments section below.

Comment  |
Email This  |
Print  |
RSS
More Insights
Webcasts
Optimizing App Performance in the Cloud
Cybersecurity's Next Wave: What You Should Know
More Webcasts
White Papers
Why Add Security to Your Skill Set and How to Do It
The Hidden Security Risks of APIs: How to Protect Your Brand, Business, and Data
More White Papers
Reports
2021 Top Enterprise IT Trends - Network Computing
DNS Network Traffic Volumes During the 2020 Pandemic
More Reports

With Google I think the fear of moonshots is diminished because the ones they do take usually land on a nearby planet if they miss the moon.  The projects that seem to die never really go away either, they live on in other forms as mentioned with Google Glass.  Over the years I think we've all seen products that were way ahead of their time that seemed to flop but inspired another product years later.  Glass is a good example of that given all of the AR and VR hype right now and I suspect that other projects will take the same path.  I can say that I'd really like to see printed cars become a thing since the tooling to build panels for cars are incredibly expensive and they limit who can make and supply parts.  Generally speaking printing body panels gives designers more flexibility, reduces the need to warehouse replacement parts and removes the expense of specific tooling to make replacement parts.  If a project can lower the overall cost of one of the most expensive items we touch every day I see that as a big win.
Reply  |  Post Message  |  Messages List  |  Start a Board
Editors' Choice
Hot Topics