Geekend: How Idiots Fool Themselves & Us - InformationWeek

How do know-nothing blowhards get promoted beyond their ability? By making us think they are smarter than they are.

Every office has at least one overconfident blowhard who keeps being promoted even though a few smart people in the office know he's an idiot. Now science knows why. It has been known for at least a decade (though I think we've instinctually known this forever) that less-intelligent people constantly overestimate their abilities, but a recent study published on Plos One from Newcastle University and University of Exeter shows that the overconfidence can spread to people around them.

This overconfidence is called the Dunning-Kruger effect, based on 1999 research done at Cornell. Kruger and Dunning asked people to rate themselves in tests on humor, logic, or grammar, and they found that the worse one actually did on the test, the worse their ability was to perceive how poorly they had done. For instance, in a test on logical reasoning, those finishing in the 12th percentile ranked their abilities on average in the 62nd percentile. In short, the least talented people taking the test perceived themselves as well above average.

Equally interesting: Those who scored highest judged themselves rather harshly, assuming they were merely above average. As Dunning and Kruger put it, "The miscalibration of the incompetent stems from an error about the self, whereas the miscalibration of the highly competent stems from an error about others." In other words, smart people give other people too much credit, and less-smart people give themselves too much credit.

That's why this new study is so important: It shows a real-world effect of this phenomenon. People who are not good performers project an air of confidence because they lack the ability to see their own failings. And we promote them for it. Meanwhile, those who are smart enough to see their own mistakes -- the workers who should be getting ahead -- are being left behind.

In the Plos One study, students were asked to predict their grades in a class after one day. They were also asked to predict the grades of everyone else in the class. The researchers found a strong correlation between the grade the individual predicted for him or herself and the grade the group predicted for that individual. The crazy thing is that it didn't matter whether that person got a good grade or not -- the fact that he or she thought they would get a good grade was enough to make others think they would, too. So the worst people in the room (since we know they are the ones most likely to think they are good) were perceived by others to be the best.

The scariest part? This keeps working long after you'd think it would wear off. The study showed that the perceived grades still correlated at the end of the class: People who expected to perform well were assumed to do so by their peers, even if they weren't actually doing well. Their actual performance didn't change how they were perceived. 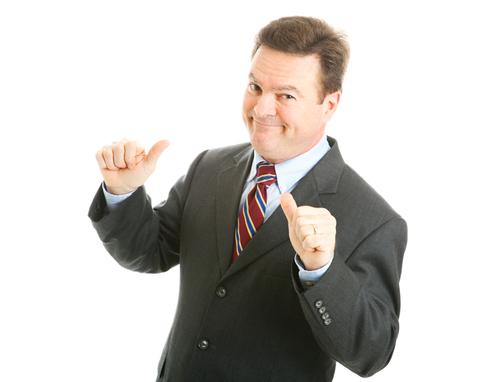 This phenomenon has a profound effect on hiring and promotions. It might be tempting to go in and fire all the confident people. But of course, they aren't all idiots. It might also be tempting to think the next time you get promoted you must be fooling yourself and everyone around you into thinking you are smarter than you are. Again, don't assume you are a fraud just yet.

The research gives us a glimmer on how to overcome this situation. The key is that most people don't grade themselves on an absolute scale. Less-talented people think of themselves like a citizen in Garrison Keillor's Lake Wobegone, where "all the children are above average." It isn't that they look at their work and see perfection; they simply believe their work is above average. They think they can do just as well as the next guy and a little better. They also lack the ability to look around and see that many people are better than they are. This is called metacriticism. And less-talented people lack it.

In other words, a student who gets a C on a test doesn't deceive himself into thinking he got an A. He simply thinks everyone else did just as badly. He ignores absolute performance in favor of relative performance.

So if you want to break the cycle of promoting idiots, look at absolute work, not relative perceptions. It's easy to think, "Everyone likes George. He's always got a smile. He's willing to help out. He's confident and smart. People say he does good work. He's management material." But what you should do is take a closer look at George's actual work (without knowing he did it, if possible) and judge it on absolute merits. Separate George the person from George the worker.

You should also look at the people who see abilities in others. Not only is that a sign of good leadership, but it is also a sign of metacriticism -- and metacriticism is a sign of intelligence.

You probably think you are doing that -- and maybe you are. But anyone who works in an office knows that there are an awful lot of idiots walking around with titles they don't deserve. Someone put them there. An office isn't Lake Wobegone. You're always going to have people who are below average. Can you tell the difference?

What do you think? Do you know anyone who was promoted beyond their abilities? Have you seen the Dunning-Kruger Effect in action? Tell us in the comments.

David has been writing on business and technology for over 10 years and was most recently Managing Editor at Enterpriseefficiency.com. Before that he was an Assistant Editor at MIT Sloan Management Review, where he covered a wide range of business topics including IT, ... View Full Bio
We welcome your comments on this topic on our social media channels, or [contact us directly] with questions about the site.
Comment  |
Email This  |
Print  |
RSS
More Insights
Webcasts
Fact or Fiction? The Truth About Cloud Native Security
Leveraging Infrastructure as Code to Streamline Security & Operations
More Webcasts
White Papers
Case Study: What Elite Threat Hunters See That Others Miss
How Secure Are Your Endpoints?
More White Papers
Reports
Proven Success Factors for Endpoint Security
The Infoblox Q1 2021 Cyberthreat Intelligence Report
More Reports


Dave, I think we have all witnessed this in the workplace.I am alwats  concerned when I see it because eventually they promote themselves to a position where they can no longer hide and reveal their incompetence. They then make an entire department miserable and usually try to blame their "sudden" lack of success on their staff and begin firing or scaring away good employees.

Political candidate requirement #1: a raging ego that makes you think everyone should love you, everyone should be willing to raid their savings to finance your campaign ... because you're worth it.
Reply  |  Post Message  |  Messages List  |  Start a Board

@Pedro- So true. I was thinking about politics too, but didn't want to muddle the message. It shows how not very bright people can get elected for sure.
Reply  |  Post Message  |  Messages List  |  Start a Board

@jastroff- Thanks for the comment. How have you personally avoided it as a manager? Any tips for seeing through it?
Reply  |  Post Message  |  Messages List  |  Start a Board
InformationWeek Is Getting an Upgrade!