When the zombies come, where do you want to be? Happy Halloween from the Geekend.

Happy Halloween from the Geekend. As long time readers might know, it is a Geekend tradition to do a special zombie-themed Geekend on the Friday closest to Halloween. Last year we talked about how the animal kingdom would actually make the zombie apocalypse frightfully boring and quick. Two years ago, we reviewed the latest in zombie prepper gear. This year, I want to talk about the best city to be in during a zombie apocalypse.

Real estate site Trulia has put together some outstanding viral marketing. They used the basic search tools available on their site to put together a list of the 25 worst cities to be in during the zombie apocalypse. Their criteria including walkability (if you can walk around the city, so can the zombies), density of hospitals (more potential zombies and more weak prey), lack of hardware stores, and population density.

First, let’s give a great hat tip to the Trulia folks for such an organic marketing campaign. They took a function of their site that could be used to find the perfect house and showed another fun, creative use for it so people would remember it. Fantastic.

But now that we’ve tipped our hats, let’s check out that criteria. I think the Trulia folks purposely left some stuff off the list. They went for simple and fun. But if you really want to get away from the zombies, where would you go?

Trulia says the worst place is Honolulu. I find this fascinating because many Geekend readers have specifically said they plan on going to a beach or an island to avoid zombies. Those people would be dead.

What would be the best place? Just what is it you look for in a city to survive the zombie apocalypse?

Personally, I want a place with a high concentration of grocery stores so I can loot food early. In addition to hardware stores, I would need outdoor stores for supplies, because I’m leaving the city for some rural area.

Along with that, I’d want a city that has a fairly straight highway shot to wilderness. Those roads are going to get backed up with abandoned cars fast so I need to be able to use them before it is too late.

I also want something near a big government base so if it turns out the government stays together and gets things back under control, I can head that way for help.

I’d also want relatively warm weather so I don’t have to fight the elements as well as zombies.

At the same time, I want to be rather far from the best research facilities in the world. You have to figure, the apocalypse is going to come from a research center where something escapes. I don’t want to be too near old cities with lots of cemeteries either in case the dead rise from the graves.

To top it all off, I kind of want to be somewhere that might satisfy my cinematic sensibilities a little bit. Let’s face it, if you are one of the last humans on earth, it is going to feel like a movie. A horrific, hungry, sleep-deprived, and uncomfortable movie. But a movie nonetheless.

So what do I think would be the best city to ride out the zombie apocalypse in? Vegas, baby. 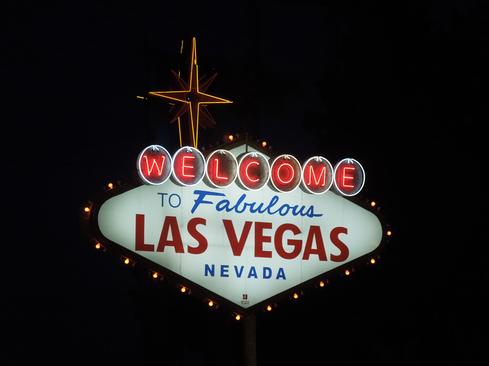 Because of all the tourists, Vegas has a very high concentration of restaurants and stores of food. Granted, it is all 99 cent buffet food, but that’s OK. Chipped beef travels. It has a healthy outdoors community, and it has tourist traps where people can shoot automatic weapons for fun. It has wide highways leaving the city in multiple directions and is surrounded by wilderness.

The military presence around Vegas is fairly significant, and with all due respect to UNLV, it isn’t near a major research center. It is a newish city so I won’t have to deal with centuries of old graveyards full of hands rising from the graves to get me like in New England. Though I have to say the idea of gangster zombies rising from the mafia tombs doesn’t sound like fun.

And what place could be more cinematic? A ruined, crumbling Vegas with tourist zombies shambling about through rows of dark slot machines makes a great backdrop for the end of days. Imagine showgirl zombies eating brains through the head dress of their kickline sisters. Picture the irony of seeing zombies shuffle through fake pyramids, roman ruins, Asian temples, and pirate ships. The only place it would make sense is Planet Hollywood.

So where would you ride out the zombie apocalypse? This guy is making a plea for Boston being a great place. That sounds terrible to me. Unless MIT or Harvard comes up with the cure, you are doomed to be eaten by the zombies of hundred pretentious future millionaires. Though, I’ll admit, zombies probably trip in the snow. Don’t forget Mars is an option. Think about it and tell us where you’d ride it out in the comments, and Happy Halloween.

David has been writing on business and technology for over 10 years and was most recently Managing Editor at Enterpriseefficiency.com. Before that he was an Assistant Editor at MIT Sloan Management Review, where he covered a wide range of business topics including IT, ... View Full Bio
We welcome your comments on this topic on our social media channels, or [contact us directly] with questions about the site.
Comment  |
Email This  |
Print  |
RSS
More Insights
Webcasts
Hybrid Cloud: The Great Balancing Act
Nip Ransomware in the FUD: Detecting Attacks Pre-Encryption
More Webcasts
White Papers
iPaaS Intrigue: A Faster Path to Digital Transformation
How Secure Are Your Endpoints?
More White Papers
Reports
The Malware Threat Landscape
Special Report: Edge Computing: An IT Platform for the New Enterprise
More Reports

Cool and great idea - I was in HongKong last weekend and it's full of bright lights. Furthermore, it's crowded and wonderful as always.:-)
Reply  |  Post Message  |  Messages List  |  Start a Board

@ Michael Endler I doubt zombies can swim, but I bet they can walk under water.
Reply  |  Post Message  |  Messages List  |  Start a Board

Trulia is smart and who knew they had a sense of humor too. Zombies hate the light, so I'm moving to Hong Kong. Hong Kong is the most light polluted city on Earth, by more than 1,000 times above international standards. That's where I am headed to hide!
Reply  |  Post Message  |  Messages List  |  Start a Board


I've been trying to figure out how San Francisco, where I live, would fare in a zombie invasion. There are a lot of hills. If you're at the top of one, the zombies could approach from all sides and you'd be stuck. Then again, zombies move slowly, and if I were at the top of a really steep hill, I bet they'd move really slowly. So if I were up there with a big gun and a few thousand rounds of ammunition, I like my chances. Can zombies swim? Maybe Alcatraz would be a good place to hide out. To assess a city's change, I really need more insight into zombie behavior and physiology.

I'm in a rural area, but close to the city. If the wifi goes out I am just going to head to the root cellar and set the gun up in my turrit....I'll be ready for those darn zombies!!!!
Reply  |  Post Message  |  Messages List  |  Start a Board

I like your way of thinking...the rural area with proper preparations. MY husband keeps watching those "prepper" shows...I think I am gonna just start stockpiling now and hunker down when it comes...I already have the rural area!
Reply  |  Post Message  |  Messages List  |  Start a Board

The castle sounds like a great venue for the zombie apocalypse! I am thinking that Vegas sounds pretty good too from the food standpoint. However, I think my ideal locale would be a shopping center that has a gun shop, a sporting goods store, a grocer, and a food court!
Reply  |  Post Message  |  Messages List  |  Start a Board

@kstaron- Probably true. But i think starting in the rural area might mean you find out about it later than everyone else. I think you might find out about it when the city looters start heading your way. Maybe you need some sort of suburban enclave near a rural area?
Reply  |  Post Message  |  Messages List  |  Start a Board

Hmm, I think vities in general is a bad idea, first you're going to have to battle with all the other looters and those that have already turned zombie. i'm thinking more like an isolated rural area to start. since you're in the sticks you've already stocked up on grocieries, already have a barn full of tools, and the population denisty is low enough to ride it out until the natural decay process makes the zombies fall to pieces.
Reply  |  Post Message  |  Messages List  |  Start a Board

@whoopty- An old castle? i love it. See, that's what i mean by cinematic. The church works for that, too.

The only problem I see with that is I suspect a lot of people will run to the church and the castle. You have to be there first or you have to convince people to team up. You might want to move to the castle now.
Reply  |  Post Message  |  Messages List  |  Start a Board
Page 1 / 2   >   >>
Editors' Choice
Hot Topics