A company is reviving the Commodore name (again), this time in the form on an Android smartphone.

Lovers of nostalgia have a new smartphone option. Entrepreneurs from Italy have acquired the rights to the old Commodore line of computers (including the iconic Commodore 64) and are reviving the Commodore name with an Android smartphone called the Commodore PET.

The Commodore name, which has bounced around through several bankruptcies and legal proceedings, still has a lot of recognition for IT pros of a certain age. Just hearing the name probably strikes a special chord with many.

To top it off, the smartphone will come pre-installed with emulators to allow users to play many of the classic Commodore and Amiga games of the time. According to Wired, the company is working with software companies to provide a pre-existing library of games for the phone's release.

As for the phone itself, it seems to measure up to most second-line Android phones available now.

The smartphone will feature a 5.5-inch display with 1920x1080 resolution and a 1.7GHz Mediatek, 64-bit octa-core processor. It comes with a 13-megapixel main camera and an 8-megapixel front-facing camera. Compare that to Samsung's Galaxy S6 Edge, which features a similar screen size but offers 2560x1440 resolution, a 2.1GHz octa-core processor, and a 16-megapixel camera.

One area where the Commodore will likely beat the Edge is battery life. The PET features a 3000 mAH battery, compared to Samsung's 2600 mAH battery. Since the phone has a marginally less impressive display and processor specs, it should tax the battery a little less.

In other words, you won't buy the Commodore PET because it is the best smartphone on the market, but it might be competitive enough that nostalgia puts it over the top. Here's what the phone looks like: 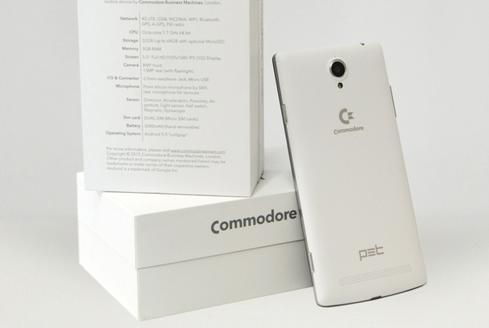 That, in my mind, might be the problem. While I didn't expect the phone to look like it was made in the 80s, I did sort of expect more of a throwback to the original design of the Commodore PET: 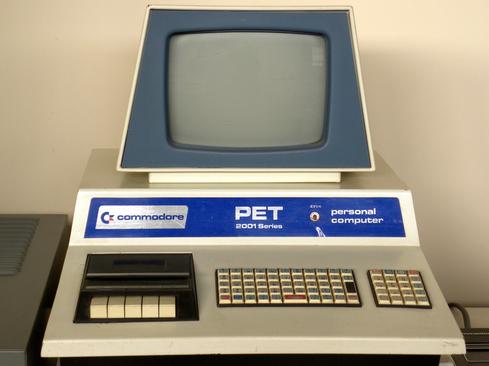 Or at least the more iconic Commodore 64: 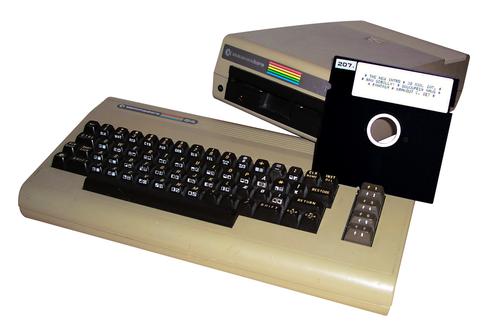 The phone will also come in the "biscuit brown" of the original Commodore 64, but it seems to me that the color won't be enough. It doesn't look all that different from the back of an LG phone, with the exception of the logo.

Considering you can play C64 games on emulators without the phone, it almost feels like what you are paying for is the C on the back and the right to tell your friends you've got a Commodore phone, so they can marvel at you for a moment.

Granted, had they made the phone look more square and plastic, like a 1980s computer, it wouldn't have functioned like the type of modern phone we would want in our pocket. But maybe just a hint of the trapezoidal bezel of the PET would have been cool, or the iconic rainbow of the C64 running down the back. Still, I love to see the Commodore name back, and I'm looking forward to the idea of playing classic games on a phone more powerful than the original computers that ran them. There's something about a timeless connection to technology that is appealing.

The smartphone comes out this week in select European countries, and there are plans to bring it out in a wider release (the US included) later this year. What do you think? Will this one be on your wish list?

David has been writing on business and technology for over 10 years and was most recently Managing Editor at Enterpriseefficiency.com. Before that he was an Assistant Editor at MIT Sloan Management Review, where he covered a wide range of business topics including IT, ... View Full Bio
We welcome your comments on this topic on our social media channels, or [contact us directly] with questions about the site.
Comment  |
Email This  |
Print  |
RSS
More Insights
Webcasts
Making XDR Work in Your Enterprise - May 12
Data Center Network Operations (NetOps) Reimagined
More Webcasts
White Papers
Cisco Secure Email
World Wide Technology: Digital Transformation Customer Journey
More White Papers
Reports
Immuta Data Engineering Survey: 2021 Impact Report
Key Strategies for Managing New Risks in Cybersecurity
More Reports

@ubergoober- I assume they picked PET because it sounds cuter and because there are no specs in the phone that match the 64 number. i think at this point the Commodore name is the selling point more than the PET. Still, your point is taken that the PET was less iconic. But I did find an interesting fact. When the PET was announced they shipped a few hundred immediately and they couldn't make more fast enough and it was backordered for several years. It was also strangely more popular outside the US as well.

At any rate, the lack of icon status for the PET might be less about the lack of sales and more about the difference in manufacturing capabilities of Commodre from the PET to the C64 which is the best selling computer in history (excluding smartphones if you count them as computers).
Reply  |  Post Message  |  Messages List  |  Start a Board

@Zerox203- You're welcome. I agree with you that just a few touches would have been enough. I also think that unlike the bloatware that most phones come with, loading a phone with something fun is a major selling point. It will be on my radar when I get a new phone later this year. We'll see how it continues to grow and stack up to the best android offerings in the next couple of years. Nice throwback to Megaman Battle NEtwork. I definitely didn't put it together.
Reply  |  Post Message  |  Messages List  |  Start a Board
InformationWeek Is Getting an Upgrade!