Self-driving cars should save lives, but a significant fraction of those being ferried about in autonomous automobiles can look forward to motion sickness.

According to a report by Michael Sivak and Brandon Schoettle of the University of Michigan's Transportation Research Institute (TRI), "6-10% of American adults riding in fully self-driving vehicles would be expected to often, usually, or always experience some level of motion sickness."

This is not to say that self-driving cars are inherently more vomit-inducing than normal cars. In an email, Sivak explained that the incidence of motion sickness in self-driving vehicles would be the same as in conventional vehicles, provided people participated in the same activities.

But self-driving cars should give us more free time, by idling drivers and by removing a possible source of conversational interaction from passengers. And we're apparently planning to use our time surplus to make ourselves sick. 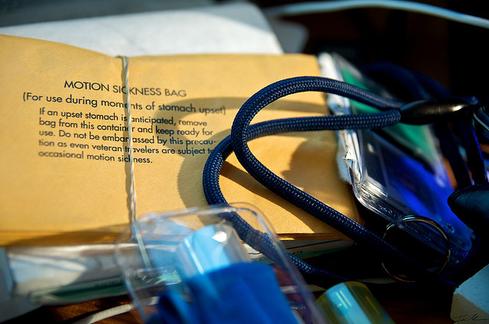 The TRI report, "Motion Sickness in Self-Driving Vehicles," attempts to calculate the expected frequency and severity of motion sickness in self-driving vehicles based on a survey of what people say they'd do as passengers in such vehicles.

"The point of the study is that in a self-driving vehicle one would be more likely to be involved in activities that are likely to lead to motion sickness (e.g., texting, watching TV/video, working, playing games), because you would not be driving (which is not motion-sickness inducing)," Sivak said in an email.

Not to worry. Nausea isn't a deal-breaker.

The cruise industry, a leading supplier of motion sickness, appears to be headed for a record-breaking year. According to a 1988 study, out of 20,029 seafaring travelers, "7% of passengers reported vomiting at some time during the journey, 21% said they felt 'slightly unwell,' 4% felt 'quite ill,' and a further 4% felt 'absolutely dreadful.'"

Air travel is also quite popular, despite its association with motion sickness and assorted fare-dependent indignities, including, but not limited to, shrinking personal space, multiplying fees, and favoritism based on travel frequency. Perhaps air travel remains popular because the comparatively smaller fraction of people who tend to throw up, feel nauseous, or feel ill on airplanes -- 0.5%, 8.4%, and 16.2% respectively, according to a study published in 2000 -- are just glad that they're not on a boat.

Perhaps more noteworthy is the finding that about quarter to a third of respondents from the US, Australia, Japan, and the UK said they'd refuse to ride in a self-driving car. From this group, the highest rate of predicted refusal, 33%, came from Japan, a country where robotic technology has been well-received. Among those from China and India, only 3.1% and 7.8% said they'd avoid autonomous rides. That disparity begs further investigation.

[Read about how an Audi drove itself across the US.]

At least there's hope motion sickness in self-driving cars can be mitigated. The report says that there are vehicle design options and video tricks available to reduce conflicts between visual and vestibular stimuli, the source of motion sickness.

Makers of self-driving vehicles may benefit by consulting with makers of virtual reality headsets, who are still working out how to best avoid making their customers sick. Oculus, Facebook's VR company, discusses some best practices in a 2013 blog post.

The TRI report also proposes behavior modification as an option. In other words, when you step into your self-driving car, just stow your phone before you hurl.

Thomas Claburn has been writing about business and technology since 1996, for publications such as New Architect, PC Computing, InformationWeek, Salon, Wired, and Ziff Davis Smart Business. Before that, he worked in film and television, having earned a not particularly useful ... View Full Bio
We welcome your comments on this topic on our social media channels, or [contact us directly] with questions about the site.
Comment  |
Email This  |
Print  |
RSS
More Insights
Webcasts
How Elite Analyst Teams are Transforming Security with Cyber Reconnaissance
Building the SOC of the Future: Next-Generation Security Operations
More Webcasts
White Papers
A Technical Deep Dive on Software Exploits
The Essential Guide to Securing Remote Access
More White Papers
Reports
The State of Cloud Computing - Fall 2020
IDC FutureScape: Worldwide Digital Transformation Predictions
More Reports


As someone who suffers form motion sickness (in cars mostly), where you're sitting in a car makes a huge difference.

The last two main reasons were an eye opening for me.
Reply  |  Post Message  |  Messages List  |  Start a Board

This is what I was trying to figure out, people ride trains, buses, taxis, etc. all without motion sickness, I imagine that there is a portion of the population who do get motion sick on these methods of transportation but I don't understand why moving from one side of the car to the other is going to trigger a higher occurrence of motion sickness.  Maybe the self driving cars are driving incredibly aggressively, but I haven't seen proof of that either every example that I've seen the cars tend to be more cautious.
Reply  |  Post Message  |  Messages List  |  Start a Board

I don't understand why self-driving cars would cause any more sickness than a regular car. Or any other form of transportation.

People are going to get motion sickness from being inside moving vehicles. I don't see this as been a impediment to this technology eventually hitting the mainstream.
Reply  |  Post Message  |  Messages List  |  Start a Board

Maybe I am missing something, but how is it different than riding in the passenger seat? Despite what some passengers seem to think, they are not in control of the car either.
Reply  |  Post Message  |  Messages List  |  Start a Board

Common sense will prevail I imagine, much like it does on other forms of transport where you aren't in control 100 per cent of the time.

My wife gets travel sick quite often but she knows to amuse herself with talking to people and not looking at screens or reading and if needs be, she takes some tablets and she's fine.

I doubt it will be any more of an issue than any other form of transport and if anything, will be far better with autonomous cars, since we're quite used to be passenger'd about in cars already.
Reply  |  Post Message  |  Messages List  |  Start a Board

I was reading the article wondering why don't people just look up every now and then?  I see kids riding in the back seats of mini vans watching movies and they don't get motion sick so why should an adult in the front seat be more susceptible?  I know when I'm riding and texting I might get a little shiver of disorientation if the driver makes a move I didn't expect but a quick glance up at the road is enough to reset everything.  I wonder if the people more likely to report the symptoms would avoid a self-driving car because of the short term discomfort of if the convenience of a robot chauffer would be enough for them to work around it.
Reply  |  Post Message  |  Messages List  |  Start a Board

Without reading the whole report, the core idea itself seems to employ some specuous reasoning; not that I think it's incorrect, but can we really call asking people what they'll do and then inferring that it will cause motion sickness because it does on, say, boats, a 'report'? It seems almost more like an opinion piece, or just an article. That said, it brings up an idea that's, in itself, worth considering. It also reminds of all the smaller, unforseen pitfalls and kinks we have yet to consider about self-driving cars that are being overshadowed by the big security/safety ones everyone keeps harping on. The extra info and references you've added pull into perspective what role this technology will have in our future, Thomas. We're not talking about 'if', we're talking about 'when'.

I went down a rabbit hole with the attached Oculus Rift article, and they explain in some detail how the human eye-brain relation works to cause motion (or in that case, non-motion) sickness. Oculus has a configuration utility that they highly recommend users running the first time they use an Oculus Rift, to avoid sickness, that maps the device to the user's specific head shape and tendencies. Seems like self-driving car and related tech manufacturers could draw some lessons from that. It's funny to note that people reported much less motion sickness for airplanes vs boats - but that was also in 2000 vs 1988. The boat study also mentioned people who took motion sickness pills had higher incidence of motion sickness - I wonder how much of both of those is linked to public perception and a sort of 'placebo effect'. Will the negative effects of self-driving cars diminish as we become more used to them?
Reply  |  Post Message  |  Messages List  |  Start a Board
Editors' Choice
Hot Topics