Apple CEO Tim Cook netted a little over $10 million in 2015, according to new filings with the SEC. However, other top executives at the company earned more than double that in yearly compensation.

Apple's latest filing with the Securities and Exchange Commission (SEC) revealed interesting details about the company's executive team and its compensation, including CEO Tim Cook's salary for 2015.

Cook took down roughly $10.3 million last year, a slight bump from the $9.2 million he earned in 2014. In addition, he holds more than 3 million shares of stock that have not yet vested, which are valued at a bit more than $350 million. 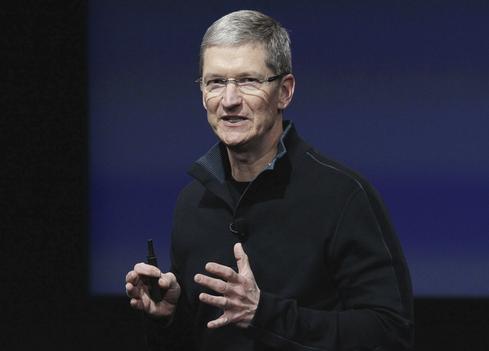 Ahrendts, Cue, Riccio, and Sewell each earned a $1 million salary, while Cook took home $2 million in cash incentive. All the executives except Cook received $20 million in new stock awards, according to the SEC papers.

One notable figure missing from the filing was Apple's head of design Jony Ive, the man responsible for most of the company’s best-selling devices.

Apple's conference call to discuss first fiscal quarter results is scheduled for Tuesday, Jan. 26, which will shed some additional light on the company's financial state. Executives will likely discuss reports of a slowdown in production of the iPhone, the company's best-selling product, which have battered the company's share price in recent days.

The appointment marks the return of the company's first COO since 2011, a title Cook relinquished to succeed Steve Jobs as chief executive.

In addition to those changes, Phil Schiller, Apple's senior vice president of worldwide marketing, will see his role expanded to include leadership of the App Store across all Apple platforms, and Tor Myhren will join the company in the first calendar quarter of 2016 as vice president of marketing communications, replacing Hiroki Asai, who earlier announced plans to retire after 18 years in graphic design and marketing communications roles.

[Was Tim Cook wrong about US taxes? InformationWeek looks at the issue.]

It will take some time to see how Apple will be compensating its new executives, but a recent interview with Cook on the CBS news program 60 Minutes left no doubt as to how the company feels about paying out taxes to Uncle Sam.

When asked by interviewer Charlie Rose how he felt when politicians called the company a tax avoider, Cook responded by saying that Apple pays more taxes in America than anyone.

Rose then brought up the idea, proposed by some politicians, that Apple is in fact "engaged in sophisticated scheme to pay little or no corporate taxes on $74 billion in revenues held overseas," to which an increasingly animated Cook shot down immediately.

"That is total political crap," Cook said. "There's no truth behind it. Apple pays every tax dollar we owe."

I was talking about soccer (football), not American football (rugby). No, you will not convince me because I have had this same view all my life and I don't see myself changing the way I see it at this point. :) Plus, I think you are not getting my point. Or, maybe you do but simply think differently, which is fine.

And thanks. I also respect your points and enjoy discussing with you. The same we were saying with Technorati, we usually agree but this time we have different viewpoints. I also agree with you that we have the opportunity to see things from a different perspective when we exchange our opinion and views. This is what makes these conversations interesting. We learn from each other to think about things from a different angle.

This time, for example, I revisited my own views to see if I still think the same. And I do. This also helps me  to reasure that I have been constant in the way I think, standing by my point of view, seeing that it's still consistent.

I also appreciate the fact that you always express your thoughts. You don't just go saying you agree, or disagree. This is precisely what makes conversations with you interesting. :)

It's really nice exchanging opinions with you. It's nice to learn about how others think. We are individuals with our own views. That's beautiful.

Historically, teachers have never earned enough considering they have to be well qualified and have some good personal qualities since they are in change of the education of the population. Teachers' salaries have always been quite low everywhere.

When I was referring to "football" I was talking about "soccer." They are all overpaid and come on, playing that game is not rocket science. I know plenty of researchers that earn much less and their work is more valuable. Because, I do believe someone who works in science, descovers vaccines that will help safe lives, etc. deserve to be compensated more that someone who kicks a ball.

As I said before, many people who make donations don't want their name to be public. I don't know and I don't care about what Tim Cook does with his money. I don't think I have the right to judge or have an opinion on someone else's finances.

That's not always the case with professional athletes. Many of them never go to collage or anything. We are not going to agree here because I will never think it's Okay for a football player, for example, to earn way more than a researcher, or other professionals who have spent decades of their life studying to earn degrees.

And certainly is not the same responsibility to be the CEO of a company like Apple than to kick a ball to win a game.

Yes, that's what I think. No matter if the person is a public figure or not everyone should have the same right to privacy when it comes to their salary.

Can't you do anything about it?

Public fugure or not I don't think it's right to tell anyone what they should do with they money. I know I wouldn't. Would you?

There are plenty of people who make donations and contribute to causes who ask to not make their donations public. I personally wouldn't jump to conclusions here.

It's the policy of the company not to reveal anything, or not too much about the plans they have.

"Companies slot salaries for positions all the time and often the person who gets lucky enough to get that slotted salary is often not deserving of it."

I agree with that bit. However, the company has always the power to choose someone else for the position after a while, or lower the salary, or do any changes they please.

I also stand by my statements. If I were Tim Cook I would never waste a second of my time discussing my income with anyone. That because I woudn't do it myself. Would you go discussing your income with people? And publicly?

Yes, I agree we have had a super long history of agreeing. It's refreshing in a way that this time we don't agree. It's good because this discussion with you triggers amny different ideas and thought, which is always welcome. And that's the point after all of having these discusions. :)

Let's agree that we are both the best. :)

Technorati, with all the respect I have for your always, after countless discussions we have had, and honoring the fact that I am allowed to call you Technorati, :D I have to disagree with you this time. :( Yes, it makes me a little sad. But it doesn't matter. :D Because I do believe that Apple would not be paying $10M to Tim Cook if the company would not believe it's well deserved. If Apple is happy with TC's performance that's all what matters. After all, it's Apple the one paying. :D And, personally, I have no complaints about TC. :) Or about you. :) You are the best Technorati on IW. -Susan
Reply  |  Post Message  |  Messages List  |  Start a Board

Angelfuego, now that you have mentioned athletes, why no one ever is in disagreement with what they are paid? For example, football players are paid a ridiculous amount of money for kicking a ball around. No brain, intelligence, or studies required to do that. I have never heard anyone saying they should earn less, or how they should spend their money. They don't contribute with anything that makes the world a better place, or advance people's life in any way. I am not sure who started using the word "puppet" in the subject line here, but those players are anything else but puppets. So, why it's not Okay for Tim Cook to earn $10M again? -Susan
Reply  |  Post Message  |  Messages List  |  Start a Board

Angelfuego, I believe there is a huge difference between the money a person earns as compensation for their work and the easy money got by other means (lotto). There is no comparison. As for how should someone spend their earning, read my comment below. -Susan
Reply  |  Post Message  |  Messages List  |  Start a Board

Hello, Technorati. :) I had to come back to this discussion to say that after some other thoughts about what people earn, and what is compensated or not I now find it funny and not really appropriate to be discussing about other people's income and much less wanting them to spend their earnings in the way we think they would. No matter if it's the person who serves your Startbucks or Tim Cook, no one should have a saying on others' personal finances because no one has the real background information about the whole matter. If you think about it, there are certain things that can never go public. How Tim Cook spends his money is strictly his business. I would not like anyone to have an opinion on if I deserve or not what goes to my bank account, or think they have. the right to tell me what should I do with my money. Other than that, you have a lovely day there, Technorati. :) -Susan
Reply  |  Post Message  |  Messages List  |  Start a Board
Page 1 / 2   >   >>
InformationWeek Is Getting an Upgrade!