The focus at Apple's most recent event may have been on products, such as the iPhone SE, but the company made some impressive strides in sustainability, too. The highlight of all this is Liam, a robot that recycles old iPhones.

Alongside software updates and new product launches, Apple took the opportunity on Monday to draw attention to its sustainability goals and accomplishments, and also to introduce -- via video -- a robot called Liam.

Liam's ability to pull apart and recycle old iPhone is impressive. It also shows how robotics is taking over large portions of the manufacturing process. But Apple's other sustainability efforts were also on center stage.

CEO Tim Cook kicked off the more than hour-long event March 21 with a segment about Apple's efforts towards preserving and improving the environment, calling vice president of environment, policy, and social initiatives Lisa Jackson to the stage to provide insights into the company's progress.

"Just like everything we do at Apple, when we think about the environment we think about innovation," she said. "We want to change the world for the better, and we think there's no greater challenge then our changing climate." 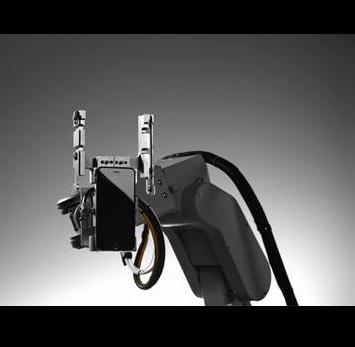 The solution to this, Jackson explained, is renewable energy. Apple's goal is to use 100% renewable energy in all their operations centers -- offices, data centers, and retail stores worldwide -- and revealed the company is already at 93% worldwide.

In addition to the strides the company has made in the two years since it made its sustainability pledge, Apple reached its goal of using 100% renewable energy in the US and in its offices and stores in China in 2015.

"In some cases we're able to purchase renewable energy right from the grid, right from existing sources, but that's not always possible, which has led us to some pretty innovative solutions," Jackson explained.

Jackson also detailed how Apple found a way to build a 40-megawatt solar farm in Sichuan Province, China, without disturbing the local yak population by working with farmers to ensure hay production wasn't disturbed by the presence of the solar array.

That solar array provides more than enough electricity to power all of Apple's offices and retail stores across China, making the company's presence in the country carbon neutral.

On the tiny island nation of Singapore, where there isn't enough room to put solar panels on the ground, Apple has taken to the rooftops of skyscrapers in order to meet sustainability goals. More than 800 buildings will be covered with solar panels to power Apple's offices and future retail stores.

She also mentioned Apple's efforts to preserve thousands of acres of forests in Maine and North Carolina, and its partnership with World Wildlife Fund to improve management of up to 1 million acres of Chinese forests.

However, Apple saved the best for last. Jackson ended her talk with a short video documenting a robot called Liam, designed to strip out-of-use iPhones of all their reusable elements.

Liam detects and removes individual components of the iPhone -- everything from tiny screws to gold and copper elements in the camera.

Apple has also formed its own Green Chemistry Advisory Board to stay in the forefront of identifying, minimizing, and eliminating toxins from the supply chain.

Nathan Eddy is a freelance writer for InformationWeek. He has written for Popular Mechanics, Sales & Marketing Management Magazine, FierceMarkets, and CRN, among others. In 2012 he made his first documentary film, The Absent Column. He currently lives in Berlin. View Full Bio
We welcome your comments on this topic on our social media channels, or [contact us directly] with questions about the site.
Comment  |
Email This  |
Print  |
RSS
More Insights
Webcasts
Using MS Teams as Your Phone System - FREE Event 4/14
Cybersecurity Risk Management
More Webcasts
White Papers
2020 SANS Enterprise Cloud Incident Response Survey
The Top 5 Mistakes Everyone is Making in Vulnerability Remediation
More White Papers
Reports
Dark Reading Report: Battle for the Endpoint
2021 Application Security Statistics Report Vol.2
More Reports