But the company hasn't yet embraced the challenge of translating the essence of technology firms into dairy desserts.

Ben and Jerry are busy people, so we did it for them. We have that much free time on our hands. We're proposing nine new tech-tinged flavors in an effort to understand the recipe for successful companies and to have some fun at their expense.

It should be said that complex global technology companies can't easily be reduced to a simple collection of ingredients. So we've chosen to focus not on the things we love about these companies -- how much fun would that be? -- but on the aspects of their businesses that leave a bitter aftertaste. 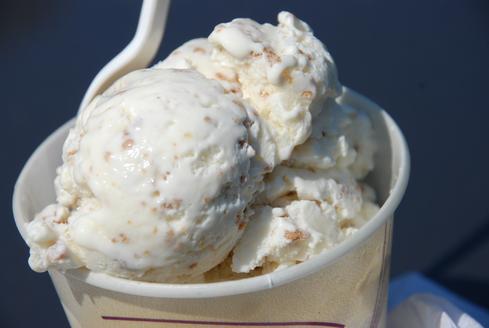 We'll start with Amazon, because it tops the alphabetical list.

Amazon has been involved in a fair number of controversies over the years, such as its deletion of Kindle content without consent, its treatment of warehouse workers, and its fight with the publishing company Hachette. Beloved by consumers and feared by competitors, Amazon's ambition seems to know no bounds. A phrase attributed to CEO Jeff Bezos, "Your margin is my opportunity," describes a company that shows no quarter.

Next up is Apple. A flavor utilizing apples would be the obvious choice, so let's avoid that. Something related to Apple's reliance on contract suppliers with dubious labor practices could work -- Overtime Indulgence? -- but really most major hardware makers contract with these same suppliers. What makes Apple unique? It's the unabashed belief that it makes the best products in the world and its unwavering commitment to its vision, even when market trends, like the popularity of large phones, force it to alter course.

Vanilla Denial, By Apple
We took heavy cream and mixed it with whole milk, sugar, artisanal vanilla, and a hint of sea salt. We made something exceptional. It's the best vanilla we've ever created. Also available in extra large and chocolate. Apple-approved cardboard insulating case available for $59.

Facebook, which began life as a social networking website, has managed the transition to mobile social network and thriving advertising company. It's the poster child for privacy issues, and that doesn't seem to bother a meaningful number of Facebook's 1.2 billion users. The biggest danger Facebook confronts is maintaining the attention of teens, who have been turning to instant messaging and photo-sharing apps rather than socializing on the web. But the company now has the revenue to acquire its way back into fashion, as it did with its purchase of Instagram.

Ice Cream Social
We take a commercially friendly vanilla base and add everything that you "Like," including fortune cookie crumbs, sponsored fortunes printed on edible paper, and the candy that you said you bought "for Halloween" but ended up eating when you were alone in the kitchen at night, when you thought no one was looking.

Google is the company that got rich by recognizing the latent value in others' labor, specifically search links. It also found a way to profit from others' copyrighted content via YouTube. Google made its products free,

"It's the best vanilla we've ever created." Well-played, Tom. What flavors did we forget, readers? Perhaps the makers of Chubby Hubby could also concoct Shy IT Guy?
Reply  |  Post Message  |  Messages List  |  Start a Board
InformationWeek Is Getting an Upgrade!