Serious gamers have been left out of the casual-game tablet app market. These well-loved games deserve a reboot for the tablet. 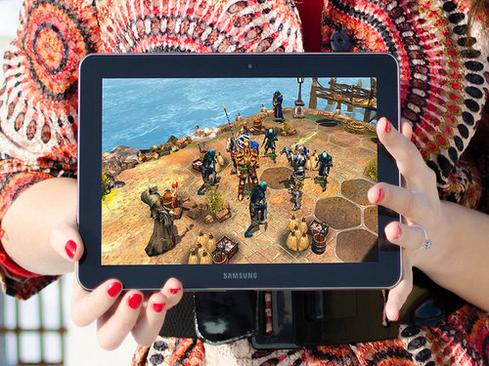 The tablet gaming market is expected to grow to $13.3 billion by 2019, even though tablet games mostly stink. Sure, there are some very successful casual games like Candy Crush (a blatant knockoff of three-in-a-row games from the last decade), and some progress has been made on action-oriented social games like Clash of Clans. But realistically, tablet games are stuck in the servant model with freemium games. Players are beholden to the games, farming in-game currency and resources or paying real cash in order to see the full game content.

Basically, there's a shortage of "real" games in the tablet market. Serious gamers are used to dropping $50-$60 on a game with a long and involved gameplay they can pick up and play as much as they want. Surely there's room for a $20-$30 tablet game that can engage a player for more than five-minute spurts until the player has enough "gold" to buy the latest widget and wait 24 hours for it to build.

Some ports of modern games like Civilization and The Sims have been tried to mixed success. Some reboots like Sid Meier's Pirates have been tried. But for the most part, we're lacking a good, in-depth, high-end gaming experience on the tablet.

Personally, I think the reboot is the way to fix this. Tablets have the computing power of desktops from a few years ago. They have unique and interesting interfaces that allow us to take a game that otherwise might look a little old and spruce it up with a new experience.

With that in mind, I went back to look at classic games for desktop PC and gaming consoles that I thought would make excellent reboots on tablets. There were some basic criteria I looked for in picking these games.

Some of these are old enough that their original developers no longer exist. I'm not sure what that would mean for intellectual property (depends on the title, obviously), but I'd love to see whoever owns them think about reviving them. Check out the list, and add which games you'd like to see made for the tablet -- or at least rebooted.

Comment  |
Email This  |
Print  |
RSS
More Insights
Webcasts
Key technology trends in 2021 - Making these technologies work for your business
People Are The Most Important Part of Autonomous SOC
More Webcasts
White Papers
Why Add Security to Your Skill Set and How to Do It
2021 SANS Cyber Threat Intelligence Survey
More White Papers
Reports
Protection Strategies for a Cyber-Resilient Organization
Are We Cyber-Resilient? The Key Question Every Organization Must Answer
More Reports

@Pedro - I was a big Duke Nukem fan so that's my vote.

I wonder if the Logitech Powershall iPhone controller really works?  Has anyone had occasion to try it?  Seems like a good start.
Reply  |  Post Message  |  Messages List  |  Start a Board

@BillB031 I do hope to see Quake I and Quake II  in the future as in my books it classic and classic should stay alive one way or other...
Reply  |  Post Message  |  Messages List  |  Start a Board

@Dave... agreed, but this days everyone puting only upgraded consules on the market... I do not see anything new on Xbox One if compared side by side with xbox 360... same ps3 vs ps4 -just better video card... but nothing new... or anything to rave about....
Reply  |  Post Message  |  Messages List  |  Start a Board

David, if you are worrying about 'throwing the controller' get a good sturdy case like an otter box or something else with good shock absorption.

I agree completely that there are more than a few good games that could have a following if they put them on the tablet.  I personally love your choices.

Here are a few more just looking around my dusty game cds;

Neverwinter nights: As I remember this rgp had the capability of writing scripts to make your own adventures which could be a useful feature for a tablet game

Grim fandango - day of the dead meets a mystery, Why can't i resist playing a skeleton in a suit?
Reply  |  Post Message  |  Messages List  |  Start a Board

@ david. I was thinking more about games that are very simple and single player which can be translated into tablets.  There are some really nice super Nintendo games, specially the shooting games. I think are really a perfect match for the tablet environment. I played a fighting game on a tablet; it just isn't the same as having the controller in your hand.
Reply  |  Post Message  |  Messages List  |  Start a Board

@zerox203- No Nintendo bashing intended. They make great games. They just make lousy selling consoles. I just think when you do one thing well and one thing poorly, find a strategy to do the thing you do well and make money at it.
Reply  |  Post Message  |  Messages List  |  Start a Board

@Pedro- Bomberman! I loved that game. Not sure it translates for multi-player on tablet, but I'd sure like to see someone try.
Reply  |  Post Message  |  Messages List  |  Start a Board

@dw_ship- I know cheaper versions of Myst are big onthe tablet. This is a perfect example of where tablet land grabs have meant low quality for existing genres. Hidden Object and Puzzle RPGs like Myst abound. I know of no classic on the tablet though. That probably has to do with the model. I'm not sure how to do freemium hidden object games.
Reply  |  Post Message  |  Messages List  |  Start a Board

Lol David,  that was referred to as "spawn pad camping".  You could set the server to auto-kill someone who didn't move from an area for a period of time, thus discouraging camping!  But still, camping and sniping other players from a high perch on a wall, or from a dark corner was quite fun!!
Reply  |  Post Message  |  Messages List  |  Start a Board

Bilbo31- I have a lot of nostalgia for Quake. I remember when I discovered the lame trick where you sit next to a spawn point with the rocket launcher and shoot people as they appear. They died and you survived and took their stuff. It was lame, but I didn't know it. I was new to the genre. Growth of a newbie. :)
Reply  |  Post Message  |  Messages List  |  Start a Board
Page 1 / 2   >   >>
Editors' Choice
Hot Topics