Company retreats can be done right -- but not if they involve hypnotists. Avoid these event choices.

10 New Side Projects For Larry Ellison
(Click image for larger view and slideshow.)

I'm a fan of company retreats. They give employees, managers, and CEOs an invaluable opportunity to bond and brainstorm about ambitious, exciting business opportunities. They also let everybody gossip about that guy, whatshisname, in customer support who wears crazy T-shirts on Friday.

But as a survivor of many, many company retreats, I've seen plenty of bad things, too -- things that can't be unseen. So, to save you and your organization time, money, and more money (legal expenses around sexual harassment suits, mostly), here are my Four Retreat Ideas to Avoid.

1. Entertainers
If you're lucky enough to work for Apple, Microsoft, or Google, you'll be treated to a relatively intimate concert featuring a world-famous rock band. If you're really lucky, you'll be a fan and won't find yourself wondering, "What geezer hired these guys?"

But regular companies can't afford name-brand talent, so they turn to local cover bands, magicians, comics, and improv troupes. I've seen them all. (Curiously, no animal acts so far.)

[Don't fall in IT career sinkholes. Read 6 Habits Of Unsuccessful IT Pros.]

Generally, these hardworking performers are fine -- the word "harmless" comes to mind -- but there's one type you must always avoid: hypnotists. It's creepy enough seeing Jenny from Accounting barking like a cocker spaniel or pretending to slow dance with an invisible date. Far worse is when one participant fails to wake up "when I snap my fingers." This really happened on a retreat I attended, and it rattled the hell out of everybody in the room, including the increasingly panicked hypnotist. True, the guy floating on an imaginary raft in Aruba with Cindy Crawford seemed to be having fun.

2. Games
The dubious idea of games to "break down trust barriers" among business colleagues is a popular one. It's based on no empirical science I can find, and you'll notice the impact of these games ends seconds after the game does. 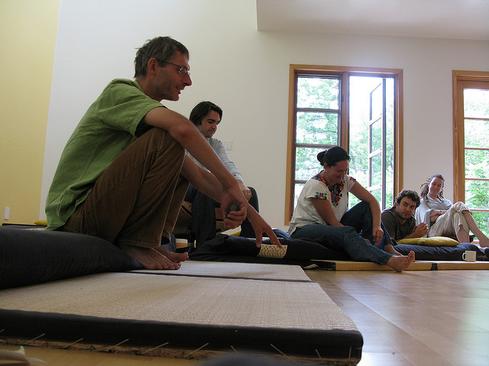 So-called "trust exercises," invariably led by overly enthusiastic facilitators, can even insult the intelligence and professionalism of the players. How's about we skip the blindfold Nerf darts game and instead aim our collective intelligence at figuring out the top two challenges facing our industry or company?

3. "Disconnect"
Wherein we're instructed to put away our laptops, tablets, and smartphones and focus on important matters, like the COO's 90-minute, 60-slide presentation. Look, if you can't hold your audience's attention, the problem isn't that their electronic gadgets are turned on. If you're boring or outright lying, they can always doodle in the margins of your handouts.

4. Booze
I've been to two company retreats that featured the head of HR issuing stern warnings about sexual harassment issues in the workplace (fascinating PowerPoint diagrams) in the afternoon, followed by an open bar and an open hot tub two hours later.

Socializing over cocktails is one thing. Frat party foolishness is another. My sense is people slam drinks at the company retreats because they all know in their hearts the same sad, desperate truth: Nothing productive is happening here; my opinion about the company, its strategy, or leaders is irrelevant; I hated the Nerf darts game.

In conclusion, don't attempt to rebuild morale, excitement, or esprit de corps with games or vodka gimlets. Have you seen your own retreat disasters? Tell us in the comments section.

Ellis Booker has held senior editorial posts at a number of A-list IT publications, including UBM's InternetWeek, Mecklermedia's Web Week, and IDG's Computerworld. At Computerworld, he led Internet and electronic commerce coverage in the early days of the web and was ... View Full Bio
We welcome your comments on this topic on our social media channels, or [contact us directly] with questions about the site.
Comment  |
Email This  |
Print  |
RSS
More Insights
Webcasts
Building Asset Management into Your Enterprise Security Strategy
Data Center Network Operations (NetOps) Reimagined
More Webcasts
White Papers
From MFA to Zero Trust
Cloud Threats Are Different, Your Security Should Be Too
More White Papers
Reports
2021 Application Security Statistics Report Vol.1
DNS Network Traffic Volumes During the 2020 Pandemic
More Reports

These are funny and accurate observations about company retreats. Those silly trust games, well-intentioned as they are, are always awkward and quickly forgotten.

Retreats/holiday parties are also indicators of how the company's doing. If one year the retreat is at a country club and the next year it's in someone's backyard, it might be time to worry.
Reply  |  Post Message  |  Messages List  |  Start a Board

Great list, Ellis. Having enjoyed a couple of pretty amazing retreats fueled by the dot-com bubble, I'm going to vote in favor of companies continuing to go a bit overboard on retreats in the fat years and downsizing in the lean times. Businesses are cyclical, so be the retreat!
Reply  |  Post Message  |  Messages List  |  Start a Board

Don't take people on retreat to a beautiful place in the mountains or at the seashore and then lock them in a conference room until just before the group dinner. I was at a retreat where our leader built a lot of goodwill by sending us all outside early to enjoy the sunset in a beuatiful setting.
Reply  |  Post Message  |  Messages List  |  Start a Board

Poor you. :( All those company retreats sound like torture to me. I am pretty sure I would have preferred to fall sick and spend a weekend in bed with a box of paper tissues by my side rather than wasting my time in such a pitiful way.

After reading the nightmarish "great" ideas that some companies seem to have, I could't help but wonder if there is actually someone coming up with good/useful ideas for such company retreats. Do you know? :/ I am tempting to investigate a little. :D