UPS' new device, which will go out to 100,000 brown-clad drivers, has some amazing features. But like any mobile device these days, it's already on the road to obsolescence. 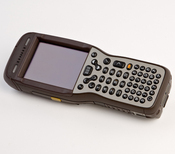 UPS Diad V
Given how long UPS has been using mobile devices, you couldn't blame the company if it ended up sounding like the grumpy old man of the smartphone world: "You damn kids, I've been doing mobile devices for 20 years, back when those Apple whippersnappers were still tinkering with their Macintoshes. When I started wireless roaming, you had to wrangle with 200 carriers just to get across the country."

Instead, UPS sounds just like the rest of us--eager to put the latest and greatest smartphone and tablet features to work. UPS is starting the global rollout of the fifth generation of it mobile handheld device, called Diad, and it will deploy about 100,000 of the units by the time the rollout is complete in 2013. Drivers use Diad to access and send package and delivery information, collect customer signatures, and more. While no one will mistake Diad V for an iPhone, with this version's touchscreen, camera, speedy processor, and 1 GB of memory, at half the size of its predecessor, UPS draws more than ever on features similar to consumer mobile technology.

But UPS also faces the same harsh reality as every company using mobile technology: Technology cycle times are getting shorter, in part because consumer tech lives on six- to 18-month turns, not the three to five years business IT prefers.

UPS launched its last mobile handheld, the Diad IV, in 2004, so it's now eight years to the widespread rollout of this new version. While Diad V will be in service for years, no doubt UPS will have to iterate to its next version much faster than in the past. Laynglyn Capers, VP of IS operations at UPS, can't say exactly when a Diad VI might come, "but I know we're working on it now."

Here's a look at the new features UPS brings with its latest mobile device:

Roaming: The UPS device is constantly monitoring wireless performance and will automatically skip to another network to keep its connection. The cellular connection is used to constantly send reports to the data center that a package is delivered or picked up, which is critical data for letting customers track packages. But beyond connectivity, the roaming feature also searches out the optimal mix of performance and cost, so if two carriers each offer sufficient performance it'll pick the one that costs UPS the least. Pretty impressive, and a feature smartphone consumers would surely love.

[ Want more on UPS IT strategy? Read UPS: Positioned For The Long Haul. ]

Touchscreen: The new Diad has a touchscreen for the first time that should boost driver productivity. However, it doesn't recognize gestures the way an iPhone does. It can't do multitouch, for example, so a driver can't pinch to zoom in on text, or use a finger to flip through screens. Gestures are one of the features Capers would like to bring to the next device. On the other hand, the screen is much more durable than a typical consumer smartphone's. UPS puts it through a gauntlet of tests for heat, cold, drops, and rain that would kill the typical smartphone. Capers says UPS also is looking at rugged touchscreen tablets for use in distribution facilities, and he sees demand just starting to build for the kind of rugged tablet needed in that environment, and thinks vendors will get there soon.

Hardware specs: Diad V has 1 GB of flash memory, with a micro-SD slot that lets it expand to 32 GB. Its 1-GHz processor means it can run much more powerful apps than the previous version, apps that integrate via the wireless connection with server-side systems. That computer power will let UPS offer more personalized services, building on the My Choice service it launched last year, which lets customers create personalized delivery options, such as leaving packages with a particular neighbor if they're not home.

Camera: You won't be dazzled with the device's 3-megapixel camera, but it's a new feature with this device version. UPS hasn't enabled cameras for use yet, but the idea is that drivers will use it for things like documenting proof of delivery or damage claims. UPS doesn't expect drivers to send the images in real-time over the wireless network but instead will load them over the company Wi-Fi network when the devices are docked each night.

Navigation: The new device lets UPS load up all the route information a driver needs to go from site to site throughout the day. The devices have GPS, so UPS knows where the driver is at any time. The next leap for UPS will be providing real-time navigation, telling drivers the best way to get to their next delivery, perhaps even considering factors such as traffic congestion. Drivers always know where to go next. "What's still left to do is help the driver get to the next place," Capers says.

The prospect of real-time navigation shows the real power of mobile computing devices like UPS', and it's no different than consumer smartphones: It's in the apps that companies build for them.

To find out more about Chris Murphy, please visit his page.

We welcome your comments on this topic on our social media channels, or [contact us directly] with questions about the site.
Comment  |
Email This  |
Print  |
RSS
More Insights
Webcasts
Protecting Your Enterprise's Intellectual Property
Building the SOC of the Future: Next-Generation Security Operations
More Webcasts
White Papers
How to Prioritize Risk Across the Cyberattack Surface
Transforming the Corporate WAN: Enterprise Network Insights
More White Papers
Reports
The State of Threat Detection and Response
2020 State of Cybersecurity Operations and Incident Response
More Reports

Please be careful about revealing too much of what UPS is doing for fear that Microsoft OR Apple will claim that is it patented technology even though UPS may have been doing it for years.
Reply  |  Post Message  |  Messages List  |  Start a Board
Editors' Choice
Hot Topics

10 IT Trends to Watch for in 2021 Cynthia Harvey, Freelance Journalist, InformationWeek,  12/22/2020
White Papers
How to Prioritize Risk Across the Cyberattack Surface
Two-Factor Evaluation Guide
From MFA to Zero Trust
Cyber Threats & Trends: Jan-June 2020
How to Compete in Financial Services IT