With operating systems from Microsoft, Apple, Google, RIM, HP, and more inside most companies, IT can't just hope it gets better.

The help desk must be a miserable place to work these days. According to our InformationWeek Analytics OS Wars Survey, nearly every company supports Windows, half of those polled officially support Apple devices, and three in 10 support Linux or Android operating systems. Two-thirds of companies let employees connect their personal gadgets to the network with little or no guidance as to what devices and operating systems they can use or whether IT's supposed to help them. If anything goes wrong, you know who gets the call.

Welcome to the OS mess.

Windows still dominates, showing up in 99% of responses, but that dominance masks a huge change in the number of operating systems IT is dealing with. Eighty-five percent of IT organizations officially support more than one OS; the average company supports three different ones. Smartphones are a major force, ushering in Apple's iOS and the Linux-based Android on a large scale. But our research shows broadening OS support across all hardware platforms, including servers, desktops, laptops, tablets, thin clients, and smartphones.

And that's just the official count. Sixty-five percent of IT organizations also allow one or more additional platforms that aren't officially supported. What a splendid idea--give a wink and nod to an incredibly powerful operating system like Apple's OS X or Linux, and somehow hope the people using it are keeping up on patches and security reviews. And hope they don't use one of the smartphone app stores to download a rogue application, introducing it on your network. Earlier this year, a scoundrel who goes by the name Myournet posted 21 malware-carrying apps on the Android marketplace before Google took them down.

This mess will only get worse. While more than two-thirds of the IT organizations we surveyed let employees connect to the company network with their personal devices, most don't enforce standards around antivirus, patches, and device selection. It's no wonder 78% of the IT pros who responded to our survey are worried about this trend, citing security, management, and support as the main problems.

So what are we doing to clean this mess up? Not much.

Most IT organizations evaluate their operating systems by device type or line of business. That misses an opportunity to tap OS knowledge from, say, the server team that might benefit the desktop team, and the chance to exploit functionality across components. Even worse is the management of the devices. Most companies have antivirus and patch management on their desktops and laptops, but less than 18% have antivirus, remote support, or patch management for tablets, thin terminals, and smartphones. 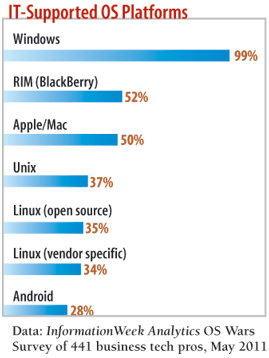 The operating system vendors are in a full-court press to expand their presence inside your company. In a recent interview with InformationWeek, Terry Myerson, Microsoft's VP of Windows Phone engineering, made it clear that Microsoft expects Windows Phone 7 to come into companies mostly through the back door, winning over consumers who then bring the smartphones to work. That's how the iPhone and iPad established themselves in the enterprise, and the server version of Apple's forthcoming Lion OS will give companies improved desktop management and storage options.

Research In Motion now has a tablet (BlackBerry PlayBook) based on the QNX operating system it acquired, and myriad other OEMs have rolled out or plan their own tablets, most of them based on the Android. Hewlett-Packard CEO Léo Apotheker said in March that HP could ship 100 million WebOS-connected devices a year, including printers, PCs, and upcoming tablets.

Google offers to sell enterprises Chrome OS-based netbook for $28 per unit per month. It's a hybrid of software and hardware as a service. The sales pitch is that you don't have to worry about maintaining the operating system, since upgrades are done online and the applications are Web based. Google claims that model will eliminate support problems, but the system has limited functionality if it's not online and Google doesn't offer remote desktop or phone support. Who will employees call if they can't figure something out? Add another OS to the help desk's list.

Cleaning up this mess is so daunting, IT teams may not know where to start. Here are five steps--none of them easy:

Research: The OS Mess
5 Ways to Clean Up the OS Mess

Become an InformationWeek Analytics subscriber and get our full report.

This report includes exclusive research and analysis on operation systems policy, including data on:
Get This And All Our Reports
We welcome your comments on this topic on our social media channels, or [contact us directly] with questions about the site.