On Tuesday while nobody was looking, a puff of blue smoke escaped the Armonk headquarters of IBM signaling a change in leadership from current IBM CEO Sam Palmisano to Virginia Rometty. Suddenly women helm two U.S. technology titans--the two biggest as measured by revenue (Meg Whitman is the CEO of HP).

We are, hopefully, beyond being startled in an era where women have been within shouting distance of the presidency. There are plenty of women CEOs running Fortune 500 corporations, from Pepsi to Sunoco to Kraft Foods to Wellpoint to (it must be said) Avon, whose CEO also sits on Apple's board of directors.

Yet it is still an anomaly within the technology sector, where the number of men outnumber women dramatically, especially in IT. We have measured our own readership over the years and found the imbalance extreme--as many as 80 percent of our readers are male. While we haven't examined these numbers lately, attendance at the InformationWeek 500 conference and trade shows like Interop continue to reinforce this notion. A recent analysis of InformationWeek Twitter followers revealed that two-thirds were men.

Apple counts 10 among its executive team (pictured below). None are women: 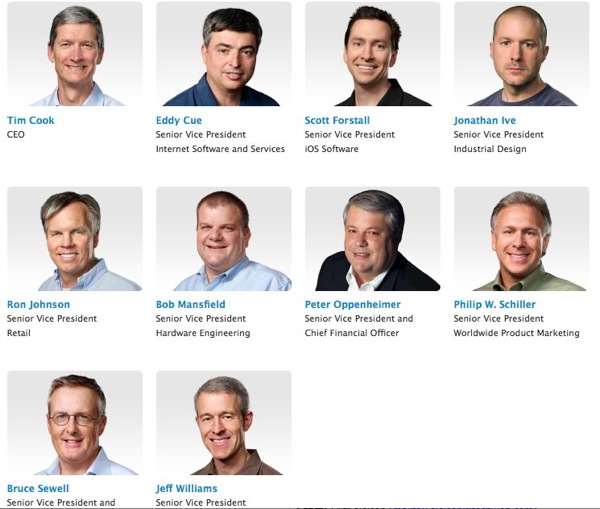 Perhaps now all of this will change. Meg Whitman isn't HP's first woman CEO, and this isn't her first stint as CEO. Oracle's Safra Catz has run the business end of Oracle for years and seems a capable heir apparent should Larry Ellison decide to pursue a UFC crown one day. There are few companies Catz isn't qualified to run.

For those who imagine that women standing atop three of the most powerful technology companies in the world would, for whatever reason, bring detente to the daily barbs and invectives hurled among the likes of Larry Ellison, Steve Ballmer, Leo Apotheker, Steve Jobs, and Sam Palmisano have never watched Meg Whitman or Safra Catz in action.

Rometty's name has surfaced before, both amid speculation around who would succeed Palmisano, but also when HP was seeking a replacement for Mark Hurd. Rometty most recently ran sales, marketing, and strategy for IBM, but her background was in computer science, and she joined IBM as an engineer in 1981. In other words, she is practically overqualified for the job.

In typical fashion, IBM seems to have picked just the right person, at just the right time, without drama and with little fanfare, despite the historic significance.

It might not warrant a parade, but it's certainly worthy of reflection.

Safra Catz throws out barbs as well as Ellison (see her interview at the recent OpenWorld conference where she trashed HP, IBM, Salesforce.com, SAP in one sitting). Meg Whitman doesn't know enough about what HP's competitors do to talk trash.
Reply  |  Post Message  |  Messages List  |  Start a Board
Editors' Choice
Hot Topics