The cruise line's journey to increase bandwidth and keep passengers online for an entire trip has led to direct and indirect revenue gains. One of seven profiles of IW 500 Business Innovation Award winners.

See our full ranking plus more profiles and analysis

Royal Caribbean Cruises increased its satellite-based Internet bandwidth about sevenfold this year, making it practical for guests on more than 30 ships to be online throughout their journey. Meantime, CIO Bill Martin is placing a big bet on an emerging technology that could deliver another leap in bandwidth.

Increased bandwidth will please guests, and Martin sees it boosting revenue in two ways, one direct and the other indirect.

Royal Caribbean expects to sell a lot more Internet access to guests. Access via satellite has been slow and, at up to 75 cents a minute, outrageously expensive. Now the company will be able to sell access for $49 a day or $179 a week, with service fast enough to use Facebook, Twitter and email.

Martin hopes the indirect revenue will come from what guests do on Facebook and Twitter -- post pictures from a cruise that provide money-can't-buy exposure. Earlier this year, Royal Caribbean celebrated its 50 millionth customer by giving every guest on board that day an hour of free Internet access and encouraging them to post pictures. "As recently as a year ago, we couldn't have done it," Martin says. 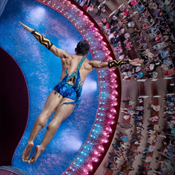 First, it has been building Wi-Fi infrastructure throughout its ships the past three years. Second, it placed new antennas on each ship to receive satellite signals. Because cruise ships come out of service only every five years, each antenna had to be mounted in the time it takes a ship to dock, unload passengers and prep to head back out.

Third, the company crafted a new arrangement to buy satellite Internet capacity. In the past, Royal Caribbean had to allocate its capacity to each ship. Now it buys a bulk quantity for a whole region and, working with the telecom company, Harris CapRock, can allocate as needed.

Fourth, it's implementing a modern e-commerce portal to allow the daily and weekly packages. Sounds boring, but the portal is software-as-a-service -- the first time Royal Caribbean could use SaaS on board, since before it lacked bandwidth. SaaS lets the company change prices and packages once for the entire fleet.

Royal Caribbean's bigger bandwidth ambitions depend on new satellite technology from a startup called O3b Networks that promises the "reach of satellite and speed of fiber." O3b has four satellites in orbit and plans to launch four more in September. Even with its sevenfold increase in bandwidth, Royal Caribbean restricts things like Netflix streaming because of bandwidth limits. If O3b works, Martin expects the company to sell guests a new set of connection options from the high seas.

CIO BIll Martin mentioned one other nice element that comes with this increased bandwidth: Crew members can do skype sessions with their families back home. Given that crews commonly are at sea for six months, that's a huge change.
Reply  |  Post Message  |  Messages List  |  Start a Board
Editors' Choice
Hot Topics