Dell World: The new Dell is here, and CEO Dell and former President Clinton look to technology's role in the future. 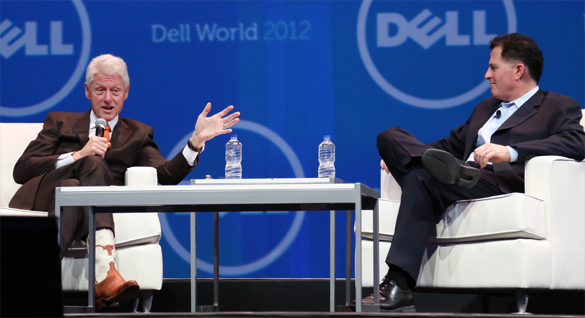 "The whole Dell story started not too far from here, about 15 blocks away, in my dorm room at the University of Texas," said Michael Dell on Wednesday, addressing 5,000-plus Dell World attendees gathered for the conference's opening keynote at the Austin Convention Center. "Today, we're a $60 billion company with millions of customers around the world," he continued. "Just 15 blocks but a million miles from where we started. We're so proud of what you've accomplished with Dell at your side."

And just like that, in only the first minute of a presentation that lasted more than two hours, the Dell CEO and founder laid out the two-day event's dominant theme: Forget the "transition" storylines that have permeated the tech giant's moves for the last several years -- the new Dell is here, and it's here because it listened to and empowered its customers.

There was more to Dell's speech, of course. He methodically described each pillar the company has erected to transform its hardware-minded origins into a comprehensive portfolio equipped to compete with Cisco, HP, IBM and others that carry the "end-to-end" banner. He also addressed the future, with help from former U.S. President Bill Clinton, who presided over the last two-thirds of the keynote. But if a single concept defined his remarks -- and indeed, the conference -- it was this: Dell believes it has all the pieces in place, and it's eager to get to work.

[ For more on the "new Dell," see Michael Dell: Our Transformation Is Complete. ]

In discussing those pillars, Dell began with the shakiest and most longstanding of the bunch: PCs. He acknowledged that we live in a multi-device, BYOD environment and said his company's roster of virtualization and cloud-based technologies allow it to offer "stability, agility and efficiency while embracing any device." Even so, Dell asserted that PCs will remain important, citing an installed user base of around 1.5 billion. Somewhat reminiscent of Intel and Microsoft's recent claims, he said, "Now with Windows 8, we're on the cusp of the next revolution in PC hardware and software."

Quickly running through the list of next-gen devices that Dell is now producing, the CEO declared, "As adoption accelerates around Windows 8 and touch, [Dell's products] give the entire billion and a half install base of users a reason to get a new PC." Indications have been that adoption isn't accelerating all that quickly, but Dell claimed otherwise, saying that customers are immensely interested in the new OS and its attendant capabilities.

Dell packaged his argument cleverly. Many businesses are still heavily invested in Windows 7 -- and Dell alluded to this, admitting that companies generally "wait a few releases to adopt a new version." But he also claimed that Windows 8 is different because CIOs are feeling BYOD pressures. Those pressures are among the few things that could compel companies to migrate to a new OS ahead of schedule, so if Dell is to revitalize its laptop sales, giving consumers "a reason to get a new PC" is the way to go. Whether this strategy will work out remains to be seen, but Dell has been pushing touch-friendly, hybrid form factors as heavily as anyone.

Dell moved on to discuss success in the data center, pausing at several points to credit customer feedback for his company's success. "Dell is now number one in market share in servers in North America and Asia, so I want to thank you all for that -- we appreciate it," he said, adding, "We're only 64,000 servers from being number one in the world, so if everyone here buys 10 servers, we've pretty much got it." He then stated that Dell is on track to become the world's leading server provider within the next two quarters.

Servers, he continued, transitioning to another pillar, are complemented by Dell's strengths in networking and storage, and particularly by its new Active System converged infrastructure platform. "Convergence is really the key," he said, arguing that the new tech would "free up time and resources to drive innovation."

Software was the next item, with Dell remarking that the company's numerous acquisitions had been blended "behind the scenes" into a cohesive set of options. Dell Services followed, as the CEO touted that "almost half the people in Dell -- almost 37,000 people in our services organization -- are ready to help you achieve your goals." He cited security services as an example, stating that the company sees around 32 billion incidents daily and protects trillions of dollars in assets. "We know more about what's going on in the world of cyber security than anyone," he declared.