IT Has Changed, But IT Budgets Haven't - InformationWeek

IT's role is shifting to focus more on innovation and driving revenue. So why are budgeting practices so stuck in the past?

The demands on IT departments keep changing, but their budgeting processes aren't keeping pace.

Those that succeed have this in common: a relentless drive to increase business productivity and cut costs, but also the creativity and agility to drive new business opportunities and revenue. The expectation for IT to drive revenue is new at many companies. In this year's Society for Information Management survey, for example, "revenue-generating IT innovations" is among the top five priorities, in fourth place, for the almost 200 respondents for the first time in the 14 consecutive years of the survey. Two years ago, it was 17th on the priority list.

Yet the IT budgeting process at most companies still looks like the same old exercise in containing IT costs. Need to take on an unexpected expense? Just one-fourth of the 351 respondents to our own IT Budget Survey have a formal process to deal with such changes, while one-third rely on "ask the CEO." How about setting the future direction for this critical spending? Just 22% of respondents to our survey say their IT governance board has a major influence on the IT budget. Another 35% say it has some influence, which isn't bad. But 43% say they don't have an IT governance board at all, or it has little influence on spending. "The budgeting process is crucial, yet as these are prepared so far in advance of the fiscal year, they tend to change significantly based on business and/or IT requirements or initiatives," laments one IT pro in our survey. "... A common concern shared in our IT groups is the resemblance--or lack thereof--of the forecast with actual spend."

And it's more than IT's new place in business innovation and revenue generation that's putting new demands on the budget process. Forces such as IT consumerization, cloud computing, and the rise of marketing-initiated IT spending have some people thinking that centralized IT is dead. Good-bye, IT control freaks; hello, business unit freedom! Is the answer to just push all of those budgeted IT dollars out into lines of business? Our data suggests central IT budgets are in fact far from dead--eight out of 10 still centralize most IT spending, and for good reasons.

IT organizations aren't on a starvation diet during this time of change: 47% of respondents to our survey expect to get an increase in IT spending next year, and just 18% expect a cut. That's similar to our last survey, in October 2010, but the levels appear up--only 18% say their IT spending is less than 3% of the total operating budget, compared with 43% in 2010.

Look at the technology areas that are getting funding outside of the IT budget, and you see that many of them are poised to grow: cloud software as well as mobile and Web app development, for example. IT budgeting hasn't changed much to account for these trends, but don't expect it to stay stagnant for long.

Death Of Centralized IT? Hardly

You'd be forgiven for thinking centralized IT budgets are dying because business units are taking their technology spending into their own hands. The argument goes something like this: Consumerization of technology and cloud software make it possible for non-IT employees to provision their own technology. As technology becomes more critical to lines of business, it makes sense for them to buy and run more of it. Look at the rise of cloud-based marketing software for digital campaigns and customer analytics, and consider the oft-cited Gartner prediction that the CMO will control more tech spending than the CIO within several years (see "6 IT Trends Tight Budgets Won't Kill").

Still, our data does show the tension around business units buying more technology. While 37% of survey respondents say outside-of-IT tech spending is decreasing as they get their arms around "shadow" buying, another 24% say their tech spending outside of the IT organization is on the rise. Bring-your-own device efforts, cloud software, and application development are each cited by at least one-fourth of survey respondents as getting funding outside of IT (see chart below). And three-fourths of the IT pros we surveyed say there's either official or suspected unofficial technology budgets that exist outside of IT. 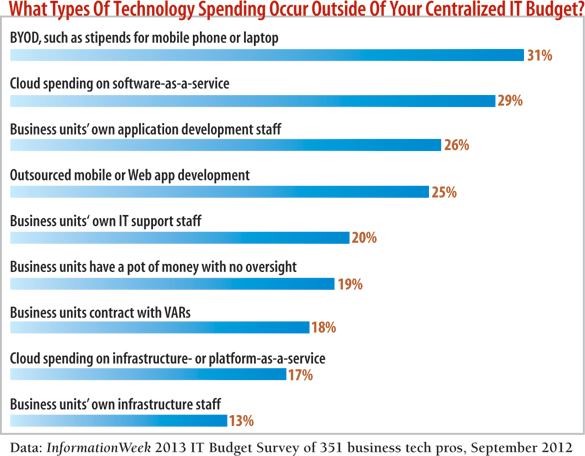