50%
Tweet
With Chromebooks, an improved tablet OS, and more, Google took aim at Apple and Microsoft, but are ChromeOS and Android on a collision course?

The biggest surprise coming out of Google I/O, at least for the enterprise, was the Google Chromebook, the laptop-like computers from Samsung and Acer, running ChromeOS. The Chromebook has been in beta for nearly a year in a grand run at thin client computing, the 21st century model, backed by great faith in the inevitable dominance of cloud-based applications and a web-centric computing model.

Microsoft's desktop hegemony has suffered, but hasn't waned, despite Google's declaration that the traditional desktop is a flawed computing model. (For an in-depth stance on the importance of the Chromebook, read Thomas Claburn's analysis here.) Or as Sergey Brin eloquently put it:"I think the complexity of managing your computers is really torturing users, all of them."

It couldn't have come at a better time. CIOs are now considering their next PC fleet, and whether it looks the same or becomes stocked with tablets. Chromebook for Business, from Google, starts at $28 per user per month. It doesn't include a data plan (that is $2 per user per month extra) or Google Apps (another $50-a-year license). It does include a device, three years of support and warranty, and a central management tool to create an app store-like environment, where users and applications get automatically provisioned. It is a three-year plan, and Google said there is no early-termination fee. That's asking for a big bet.

The idea here is to get IT out of the messy and costly business of support, and on to revenue-producing projects. Fanboi CIOs at Google I/O said any cost of ownership savings wouldn't go to cutting costs, but getting to the endless IT honeydo list.

ChromeOS is tightly coupled with hardware--for now, that's Samsung and Acer (unless the crafty hacker gets at it). Demonstrations at a private Samsung event revealed thin, lightweight laptops that boot instantly, stay connected (when possible) and assume a world of web-based applications running in the cloud. USB ports allow external data in, and a file manager provides web application access to that data. The updated ChromeOS also includes a media player. Any ChromeOS application can take advantage of local cache to run in offline mode. Citrix will ship a Receiver client for access to local Windows apps for any company using XenApp. 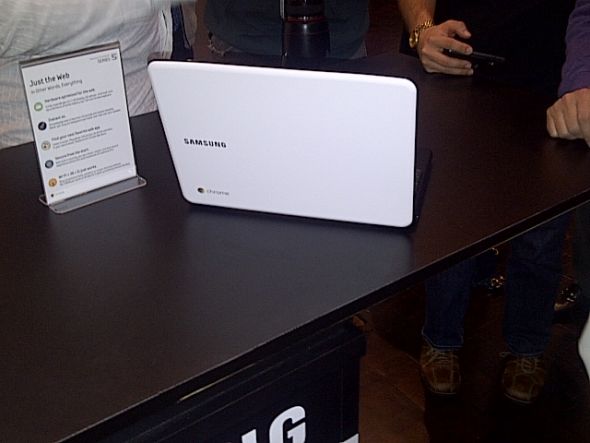 Again with the vision thing. Google trotted out Gartner TCO estimates for desktops, the raft of computer viruses and help desk calls. For $336 per year, all of that goes away. The ChromeOS boot process is highly secure, Google said, and the same sandbox capability that the Chrome browser champions is also present in the operating system, which is to say that tabs (or apps running in a tab) are protected from one another. One CIO said that Chromebook rollouts in his organization resulted in a dramatic drop in help desk calls--to almost zero. 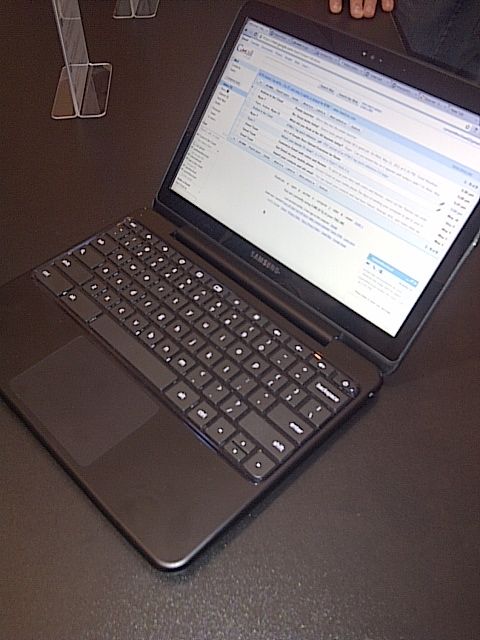 Hello? It's 1999 calling, and it wants its thin client computing model back. We bought it then, we'll buy it now, but it's still plagued with some of the same concerns. This might be a far more connected world, but it's not completely connected--not even close. CIOs I spoke with want this, but none are ready to commit to it. They are intrigued, but not compelled. One noted that perhaps an application like the Touchdown for Android could become a viable ChromeOS front end for Exchange customers . . . hmmm. Maybe.

One CIO said that although some ERP applications allow web access, they do so using Active X controls, which will not work in Chrome. In other words, all web apps aren't created equal.

Isn't the world mobile web? In the face of a barrage of questions about the obvious-to-everyone-except-Google notion that ChromeOS and Android are headed on a collision course, Google is mum. It insists that the two teams are separate. The ChromeOS team is 100% focused on notebooks. Hard-headed. Then again, if it staked a future on the convergence, it would face yet another fragmentation.

It's the price of an experimental universe. Let it serve them well.