We're no longer impressed by smartphones that let us check bank balances and transfer money. But what about applying for a loan while at a car dealership, looking at that new pickup you covet, and getting approval in 30 seconds? For the past year, CUNA Mutual Group has made that possible with a mobile loan application it sells to credit unions.

Not bad for a skunk works project that got started at a kitchen table.

CUNA Mutual Group provides services such as insurance and asset management to about 6,750 U.S. credit unions. One core service is Loanliner, a software-as-a-service application that manages the documentation and compliance processes for loan applications.

CUNA Mutual saw the potential for mobile devices to help credit unions make more loans and attract younger members. But CIO Rick Roy took a cautious approach. "We took a couple of senior developers who know the Loanliner application and sent them on a journey to learn mobile," he says.

Two developers and the Loanliner business system owner kicked off the project on an evening in mid- 2010, writing a bit of code in one of their kitchens over a couple of beers. They later developed a simple prototype that demonstrated the app's potential. Then they got serious: built the business case, got approval and funding from the governance board, and wrote the real app by June 2011.

The smartphone loan application is browser-based rather than a native app, and it supports Apple and Android devices. Even with the browser-based approach, though, the biggest IT challenge was getting a consistent experience. "A function runs great on the iPhone, but then it's horrible on Android," Roy says. "You have to look for a way to make it work on each device without a complete customization nightmare." 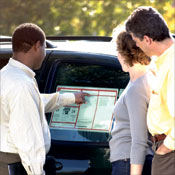 Since launching the smartphone loan app, CUNA Mutual Group says it has processed about 35,000 loan applications from it, generating more than $335 million in loan application volume. The smartphone app also has a high completion rate--more than 50%, or about twice the typical rate for other types of loan applications. "People may change their mind, they may be shopping a rate so they go far enough to see the rate and then cancel," Roy explains.

For CUNA Mutual, it has landed 40 new credit unions as Loanliner platform customers since launching the smartphone loan app. "That's where this project has exceeded our expectations," Roy says. "We underestimated how much interest it would generate." In all, more than 550 credit unions have implemented the smartphone loan application, and CUNA Mutual Group has entered into an agreement with the banking tech company Fiserv to make it available to another 350 credit unions.

The big strategic risk for CUNA Mutual comes from how fast the mobile marketplace is changing. In a traditional IT environment, Roy could count on several years to get a return on development work. In mobile, a new device could quickly blow up your plans. "It creates scary moments where you say, 'Am I going to be able to leverage this investment for even a year or two, or will we be back at the drawing board in six months?'" Roy says. Or maybe, back to the kitchen table.