50%
Tweet
After getting to know Bill Schlough, InformationWeek's L.A. baseball diehard Fritz Nelson has just one question: Why isn't this guy with the Dodgers?

If writing about Bill Schlough, CIO of the San Francisco Giants and InformationWeek's 2012 Chief of The Year, were a nine-inning baseball game, it might look a little something like this.

Earlier this year one of our reporters and our video crew joined Schlough at a Giants home game, to learn how the organization creates a superior fan experience using technology.

Schlough spent all day with our editorial team, taking them down to the field, arranging interviews with players Angel Pagan and Brandon Crawford, Giants CEO Larry Baer and manager Bruce Bochy.

That game turned out to be Matt Cain's historic no hitter, and as it was developing Schlough took the editors down to the field to be in the moment, and then celebrated with them after.

(You can watch that video report here.)

Inning 1: The Giants are playing the Detroit Tigers in the World Series. The Giants are ahead in the series 2 games to 0, and they're in Detroit for game 3. Hoping to see how accessible Schlough will be so that I can tell him we've selected him as our CIO of the year, I send him a simple hello email, congratulating him and the team on their World Series run.

He replies almost immediately. He's in Detroit. He accepts my congratulations. He says something playfully snotty about my Los Angeles Dodgers and sends me some reading material. I decide to wait until the World Series is over to tell him about our selecting him as Chief of the Year.

Inning 2: I'm warming him up. The Giants have just swept the Tigers, and I congratulate him again, as much as it pains me. He replies: "It's just a bummer you didn't do another hatchet job on us this year so that you could issue another retraction." He's referring to this hatchet job and retraction.

He's really going to make this difficult, isn't he?

Inning 3: Schlough is genuinely excited when I tell him the Chief of the Year news, then skeptical or cautious. His response: "Wow! First a World Series Championship, then a parade, now this? I'm kinda speechless and wondering if there is a catch. Like you need me to appear in all photos wearing Dodger gear."

Schlough jumps over my highest hurdles. He puts me in touch with everyone I ask for to learn more about him, including the CEO of the Giants (Baer), the CFO (John Yee), the VP of baseball operations (Bobby Evans), his three direct reports and several line of business heads. He even suggests I talk with the top IT execs of the San Diego Padres, the Los Angeles Dodgers (what?) and the Dallas Cowboys, as well as the CTO of Major League Baseball and the CEO of baseball's Advanced Media unit. He contacts all of them in advance. Everyone agrees to talk with me. Some of the meetings Schlough sets up for me personally.

Inning 4: It's a typical overcast day in San Francisco when I arrive at AT&T Park, and it's quiet. It's the off-season. Inside the gate are gorgeous championship coats just sitting in a box. I could easily take one, but what would I use to burn it?

Schlough sets me up in a conference room: home base (plate?) for the day. We talk in his office, which is cluttered but impeccably organized. I ask for an org chart, and he reaches to get it, almost without looking.

For lunch, we get salads next door at an eatery. He nods or says hello to at least 10 random people. He seems to know everyone. He takes me onto the field (yes, the one where the Giants play), and we eat our lunches there. Above the blaring music, as if there were a game and it was between innings, we talk about raising children and about sports and leadership, and about his volunteer efforts away from work, like with Junior Achievement.

And he makes it all sound easy. And I get the sense that for him, it probably is.

Inning 5: It becomes apparent that there's something special brewing for later in the day. He won't tell me what it is.

I meet Schlough's staff: Dan Quill, who heads up application development; Dave Woolley, who's in charge of strategic IT initiatives; and Ken Logan, senior IT director.

I do my best to poke around at the edges, trying to get them to give me some dirt on Schlough, but they're having none of it. Woolley: Schlough is "a CIO, a VP, but he's the type of guy who leads by example. He'll be right there when we have to clean out a closet . . . . Schlough is superman. He'll do whatever it takes to help the team."

Wait, does this count? "He doesn't eat. He doesn't sleep. I think he might be an alien," Woolley says. Maybe he meant that in a positive way.

And here's Quill, on the IT team's early morning travel habits: "If you leave after 6 a.m., it's like he's broken a rule or something."

Inning 6: Now we go down to the field. Schlough has gathered the entire IT team. A man appears, walking almost like a guard at Buckingham Palace. He's wearing white gloves, and in his arms, under a Tiffany-blue cloth, is some sort of large structure. It's the Commissioner's Trophy.

When the Giants won the World Series two years ago (after decades of futile efforts, while the Dodgers busily collected a cool half dozen), that trophy was carefully guarded. Now the entire IT team gets a picture with it. They even let me hold it -- such agony, for this Dodgers fan. I swore I overheard Schlough tell Mr. White Glove to disinfect it afterward. 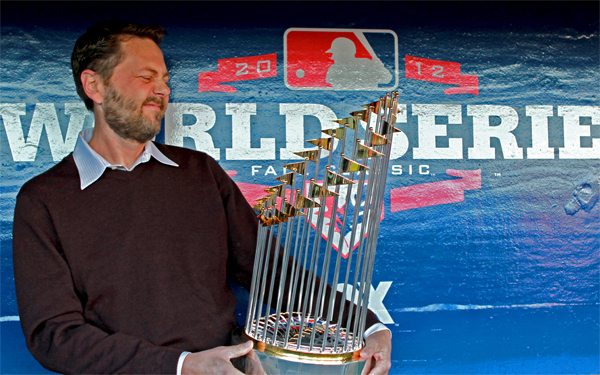 Inning 7: I talk with other people about Schlough. I must have talked with nearly every Giants employee and everyone associated with Major League Baseball. They all give me some slightly different version of the same thing: how Schlough is a leader, how he could be CIO of nearly any organization, how he is so well respected and liked, how effective he is. (Why isn't he with the Dodgers?!)

CEO Baer: "He's a highly versatile player. He has a breadth of understanding of baseball and the sports industry that goes beyond the sports technology. . . . [he's] made a huge difference in the organization."

Inning 8: There are more people and more stories about Schlough. Even the Dodgers CIO, Ralph Esquibel: "He tends to be one of the most outspoken individuals among CIOs in baseball. He's very open, very straightforward, very honest."

Evans, the baseball operations VP, says that Schlough demands high performance and gets the most out of people, but that he also understands the big picture. Quill calls Schlough progressive, different and someone who lets his team members perform without interference. Woolley says Schlough's goal-setting keeps the team focused. Logan says Schlough is organized, structured and communicates, and the team is well aware of what they're working toward.

Linda McCracken, president of Junior Achievement for Northern California: "In addition to taking a genuine interest in our students' goals, Bill takes time to be a role model and speak to students about his career choice, how he has worked to expand technology in his job, to answer career questions, and to even make tickets available to students so they might experience the excitement of a professional sports game."

And then there's Sue Peterson, who heads up the Giants Community Enrichment program: "He's both a personal and professional champion of the Giants community fund . . . Bill goes a step beyond just what we ask . . . . he gives his personal time . . . . He has helped us with personal donations. He motivates his staff, his friends. He rallies his department to give time." And so on.

Inning 9: Would it come as a surprise that Schlough graduated from Duke University and has an MBA from Wharton? That he worked at EDS and Booz-Allen? That he is a board member of the Bay Area Sports Olympic Committee, where he played an instrumental role in getting San Francisco into contention to host the Summer Olympics in 2012 and 2016? How about that he's excited about trying again for 2024? His license plate, BASOC CEO Anne Cribbs tells me, reads: "SF20xx?"

The Giants have won two World Series in three years, and they sell out every game. What else is there to achieve? The thought doesn't even register with him. There's always more to do, and if it's not on the baseball field, it's with merchandising opportunities or new club venues like Mission Rock, the community gathering center the Giants plan to open near the stadium.

This will surprise you: Schlough was the interim CEO of the minor league San Jose Giants, and is now the team's chairman. Not bad for an ex-Unix administrator.

Extra Innings: Schlough is one of those people who thinks in things like "the three p's," as in people, process and passion. His team has a mission statement that it wrote together. It consists of three, color-coded one-sentence steps.

He urges me, for our Chief of the Year piece, to use photos of his team, not him.

I'm finishing my story on Schlough, and I need a few fun facts. He's at the winter baseball meetings, where the Giants signed the oxymoronically named Angel Pagan as well as Marco Scutaro. Somewhere past midnight he sends me the information he has gathered.

And then he adds that he said hello to Tommy Lasorda for me.

That is Bill Schlough.

He once brought me a Brian Wilson bobblehead doll and led a crowd in a chant of "Dodgers suck." And I liked it.

I can't stand the Giants. And I hate Duke. But it's impossible to not like Bill Schlough.

We welcome your comments on this topic on our social media channels, or [contact us directly] with questions about the site.
Comment  |
Email This  |
Print  |
RSS
More Insights
Webcasts
Building an Incident Readiness and Response Playbook
12 Ways to Defeat Multi-Factor Authentication and How To Stop the Bad Guys
More Webcasts
White Papers
NetFlow vs Packet Data
Definitive Guide to Securing DevOps
More White Papers
Reports
Can You Spare 10-12 Mins to Help Us Out with a Survey on Tech Trends?
Got 7 Minutes? Dark Reading Needs Your Help With Our Survey on Incident Response
More Reports