50%
Tweet
Watson's early, $5 billion bet on computers made IBM an institution and moved him out of the shadow of his iconic father. 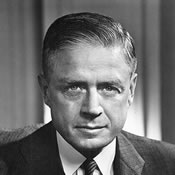 "There is a market for perhaps five computers in the world." -- Tom Watson Jr.

How many sons of outstanding men exceed their fathers? Succeeding his legendary father, David, Robert Sarnoff ran RCA … right into the ground. Henry Ford's son, Edsel, turned out to be … an Edsel. Even George Steinbrenner, the Yankees owner, couldn't live up to the expectations of his father, Henry, who berated his son for not having the right stuff to get into MIT and for being too chubby to be a jock. Henry was the NCAA 220-yard low hurdles champion at MIT in 1927.

But Tom Watson Jr. was the exception.

His father, Thomas Watson Sr., created IBM as we know it in 1911, taking a hodgepodge of nearly bankrupt little companies -- in businesses as undramatic as butcher scales and time recorders -- and turning it into a colossus. The father ran IBM for 40 years until 1952. Tom Jr. was a jet pilot who came reluctantly to IBM, but once there and in charge, made a $5 billion bet that took IBM to heights almost no other company achieved.

That $5 billion was three times IBM's revenue at the time! If that gamble had failed, IBM would be of little significance. But it didn't fail. IBM became the No. 1 company in the No. 1 industry in the world.

That bet was on the System/360, the first computer family that covered the waterfront. Customers could start small, then continually upgrade to larger and larger computers without having to rewrite their software or applications. Up to that point, when a company outgrew its computer, it had to start all over.

Customers flocked to the S/360, and IBM became so dominant that it awoke the antitrust division of the Department of Justice. It won the suit eventually, but that suit stifled IBM in a way that wasn't recognized for a decade. It made IBM timid where once it was bold.

As a boy Tom Jr. tearfully told his mother: "I can't do it. I can't go to work for IBM." But he did. Against all odds he did. The student who took six years to get through high school and the playboy who partied through Brown became the most unlikely CEO and one of the most successful. Maybe it was his experience during World War II, where he was decorated for his bravery and planning skills in flying aircraft. But in any case, back from the war, he decided that the future lay not in flying for United Airlines but in running IBM.

And he wasn't going to be just a gatekeeper, genuflecting to his father's achievements. He saw very clearly that IBM's future lay not in last decade's tabulating machines, scales and time clocks but in the next four decades of computers.

His father was aghast. All those great products were no longer supported.

But Tom Jr. pressed on, hiring some of the brightest minds, like Johnny von Neumann, the guy who invented game theory. He fought with his father about finances. He pitted his managers against each other and saw that the best steel came from hot forgings.

IBM became a fierce competitor wrapped in a blue suit. It mastered understanding the customer. It used fear, uncertainty and doubt to make sure that competitors never gained a foothold. "No one ever got fired for buying IBM."

But we're getting a little ahead of ourselves. Those days would come (and go), but not yet. In the late 1960s the System/360 was not a slam dunk. It was beset with software problems, and Tom's brother, Dick, was the man in charge. Tom fired his brother. (DEC founder Ken Olsen also fired his brother, Stanley. Nothing like a little sibling rivalry to stir the old juices.) So beneath that whimpering, unsure kid was a tough-as-nails executive. He was his father's son.

Tom Jr. was not to be denied. Those pesky S/360 software problems got solved. IBM's installed base grew from 11,000 computers in 1964 to 35,000 in 1970. IBM salespeople wore white shirts, blue suits … and hats! IBM developed the Universal Product Code and the SABRE reservation system for American Airlines. It was one of the first paternalistic companies, providing group life insurance, paid vacations and $1-a-year country club memberships (no drinking, thank you).

So after wrestling dominance of computing from Univac, crushing NCR and forcing it back into cash registers, outflanking Control Data (once king of the supercomputers), banging Honeywell/GE out of the industry, outflanking ICL in England, Bull in France, Nixdorf in Germany and Olivetti in Italy, who was left for IBM's executives to battle?

In 1973, Bill Gates went to Harvard, and that small step was the beginning of the end of IBM's greatness. IBM wanted into PCs. It wanted the "IBM environment" everywhere, but in 1973 IBM owned 70% of the computer market while everyone else fought for the remaining 30%. The company knew that "the enemy is us," that it was vulnerable to the internal backbiting and politicking that made any movement doomed. By the 1980s IBM was the most profitable, admired and maybe the best-run company in the world. But cultural gridlock kicked in.

Tom Watson Jr. had long retired and IBM's senior executive management committee ran the place. Those execs were spending $7 billion a year on R&D -- 10% of all the R&D spending in the U.S. They had 100,000 salespeople. Their profits were greater than the sales of IBM's major competitors combined. They were hiring more college graduates than the top five Fortune companies combined.

There's a great line from a song in "Evita" that goes: "She had all the disadvantages you need to succeed." Sometimes advantages -- wealth, power, position -- become disadvantages when trying to create your own legacy. Most sons fail to live up to the legacy of their successful fathers, but not Tom Watson Jr. Still, after he retired in 1957 because of a heart attack, he would often think back to his beginnings and mark the anniversary of his father's death by saying to his wife: "That's another year I've made it in his absence."

We welcome your comments on this topic on our social media channels, or [contact us directly] with questions about the site.
Comment  |
Email This  |
Print  |
RSS
More Insights
Webcasts
Staffing & Training a Cyber Incident Response Team
Enterprise Database Strategies for 2020
More Webcasts
White Papers
Wired vs. Wireless LAN Solution
NDaaS 101
More White Papers
Reports
Online Threats -- and What Your Org Can Do About Them
[Special Report] Remote Network Management
More Reports

I can think of plenty of upstarts -- particularly in the big data and analytics arenas -- that now have "all the disadvantages you need to succeed."
Reply  |  Post Message  |  Messages List  |  Start a Board
Editors' Choice
Hot Topics