50%
Tweet
All hail the transistor, the building block of the computer, communications and space ages.

Irony: Even though Bell Labs invented the damn thing, it didn't get around to using transistors for another 10 years. It still had a lot of vacuum tubes hanging around that it didn't want to write off. And it's that kind of thinking that ultimately cost AT&T an even bigger prize: dominating the still-non-existent computer industry.

One of the companies taking out a license was Texas Instruments, a small, innocuous division of an oil well services company that needed to build better instruments to find oil. Thus, transistor technology jumped from beautiful downtown Newark, N.J., to Texas and California.

The technology that could locate underground oil could be re-tasked to find underwater boats. And so TI began making sonar to find subs, becoming a defense contractor. A few years later, in 1958, a TI engineer named Jack Kirby was bold enough to put five of these transistors on a half-inch piece of germanium. It was the first integrated circuit, and Kirby would go on to win a Nobel in physics in 2000.

Shockley headed west and took a few of the Bright Boys from Bell Labs with him to what became Silicon Valley. Shockley was a terrible manager, and his loyal team was soon in revolt. These renegades, aka the Traitorous Eight (Gordon Bell, Robert Noyes, etc.), spun off from Shockley Semiconductor and went to Fairchild, where they came to be known as the Fairchildren. They got to work perfecting the transistor and working on multiple transistor devices ... to be known as semiconductors.

Let's imagine that you printed this article out on your home computer, and let's estimate that there are 1,000 words on that page. What did it cost you? Two cents maybe? But suppose you want smaller-type fonts and put 2,000 words on the page. Or 4,000. Or if you could make the type small enough, 4,000,000 words. Would your cost go up? Of course not. Yes, you might use a little more of that oh-so-expensive HP ink, but let's be serious.

Why is this important? Because once we start etching and putting more elements into one of these chips, the cost goes straight down. We're borrowing technology from the printing industry, which goes back to Gutenberg. The early transistors cost $150 each! 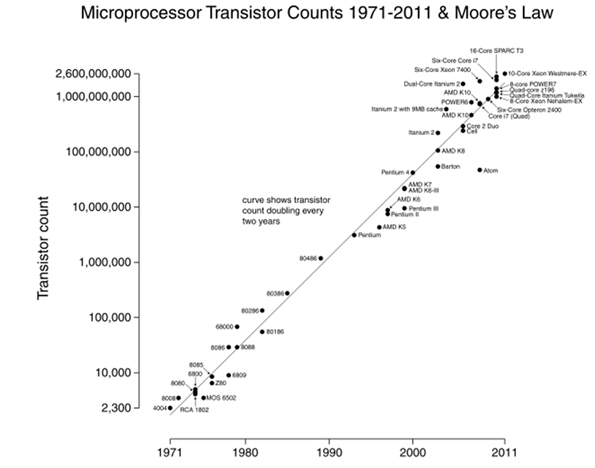 All of a sudden, the rules had been forever broken. Costs of electronic components would go down per element to almost zero, which would open up huge markets for computers, communications and consumer electronics. It would be possible to put entire computers on one chip, spawning the personal computer, cellphone and about every other advanced device we own and will own. 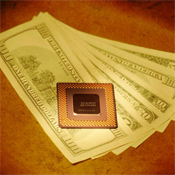 Noyce and Moore would go off to start yet another company, Intelligent Telecommunications, or Intel. More on them in the next installment of this series.

The irony of all this: Because AT&T was forced to license out this technology and was reluctant to leverage this advantage itself, new companies sprung up to take the torch forward. AT&T on its own wouldn't have pursued such markets, but the Knew Kids On the Block figured out how to combine breakthrough technology and sophisticated money to create the largest pool of talent and wealth the world has ever known.

I certainly hope you have plans to turn this whole series into an annotated e-book at its conclusion (I'd love to hear more about the Fairchildren's split from Shockley). Great series!
Reply  |  Post Message  |  Messages List  |  Start a Board

Nice article. In fact I am enjoying your series immensely.

Hosted business phone system is an ideal solution for business now. You don't have to worry about installing any software or hardware. However, can have access to all the features large business have. The best part is the price is very affordable. It starts from about $10/month. With this system you don't need a separate business phone line. You can use your personal cell phone or home phone. You will sound as professional as fortune 500 companies. I have been using IP PBX from Telcan. I believe they provide the IP PBX at the best price. They even gurantee to beat any lower price by 10%.
Reply  |  Post Message  |  Messages List  |  Start a Board
Editors' Choice
Hot Topics