50%
Tweet
All hail the transistor, the building block of the computer, communications and space ages. 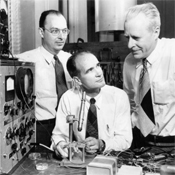 John Bardeen, William Shockley and Walter Brattain
I have a question for you: Where do all the bright people work? Maybe Google and Amazon and maybe startups funded by venture capital. Ten years ago it was clearly Microsoft; 20 years ago maybe IBM Yorktown Heights. But from 1930 to 1970, it was AT&T Bell Labs. No question.

This was the place that spewed Nobel Prize winners. It's where brainpower wanted to be. You could have formed a Mensa group on every floor. Want to know a little secret? Bell Labs really ran AT&T -- each AT&T telephone company was "assessed" 2% of its sales to fund Bell Labs and Bell Labs took on only those projects that were "interesting." Most manufacturing companies have an R&D department. Bell Labs had a manufacturing department: Western Electric. Out of Bell Labs came the transistor.

Before the transistor? The Stone Age. After? The Space Age. The Computer Age. The Communications Age. Call it what you will, this invention changed the world, changed the wealth of nations and changed the balance of power -- everywhere.

And it started quite simply. The light bulb was essentially just a vacuum tube with a filament, much as Thomas Edison built it. Radio amplifiers are really variations on the same theme, just a light bulb with an extra plate. And as impressive as those amplifiers were, they failed with amazing regularity. They got hot, very hot, and when they got hot the materials inside began to break down. 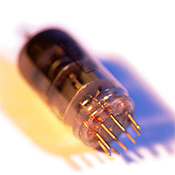 So you fix them, right? What's the big deal? It's simple if you're replacing a tube in your RCA Victor radio; it becomes a very big deal when you're AT&T and you need to amplify your signal to cross the country. So somebody, anybody had to go out and find that pesky dead culprit, change it and get the system working again.

Except that some of those amplifying boxes were in the middle of nowhere. So AT&T rang up its Home For Geniuses and told them to get hopping, find a replacement for those quirky vacuum tubes. World War II was over and voice traffic was escalating. Direct distance dialing was coming and an avalanche of people wanted to talk to each other. Ma Bell needs help!

William Shockley was put in charge, and he put John Bardeen, a physicist and electrical engineer, and Walter Brattain, a physicist, on the case. The three of them came up with the "transfer register," or transistor. Bell Labs patented the device in 1948 and the Three Amigos shared a Nobel Prize in Physics in 1956. (Actually, they weren't Three Amigos. Shockley was a bit of an ego head case.)

But here's where it started getting fun. Because AT&T was a public utility, it was forced to license its patents for (hold your hat) $25,000. So if you're a vacuum tube maker, what do you do? Slam dunk, you take out a license. RCA bought a license. So did GE. And Shockley himself bought one. Why not?

I certainly hope you have plans to turn this whole series into an annotated e-book at its conclusion (I'd love to hear more about the Fairchildren's split from Shockley). Great series!
Reply  |  Post Message  |  Messages List  |  Start a Board

Nice article. In fact I am enjoying your series immensely.

Hosted business phone system is an ideal solution for business now. You don't have to worry about installing any software or hardware. However, can have access to all the features large business have. The best part is the price is very affordable. It starts from about $10/month. With this system you don't need a separate business phone line. You can use your personal cell phone or home phone. You will sound as professional as fortune 500 companies. I have been using IP PBX from Telcan. I believe they provide the IP PBX at the best price. They even gurantee to beat any lower price by 10%.
Reply  |  Post Message  |  Messages List  |  Start a Board
Editors' Choice
Hot Topics