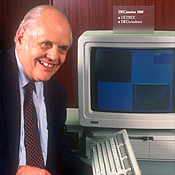 Ken Olsen
Ken Olsen, the founder of Digital Equipment, had both great insight and horrible foresight. He was the first to realize that a standalone minicomputer could do some jobs better, faster and cheaper than the larger mainframes sold by IBM and the six other domestic mainframe companies. His products led the industry, and he built a complete company: processors, software and communications.

Having beaten the Defenders with a new solution, he also said, in 1977: "There is no reason for any individual to have a computer in his home." So he never quite realized that the same downward pressure on prices and upward power of chips would do to him what he had done to IBM and the Bunch companies.

In 1957, Olsen and Harlan Anderson were getting frustrated because they couldn't raise money for their fledgling computer company. The Money thought the industry was already too crowded, and well-run companies such as RCA and GE were struggling. Finally, Georges Doriot of venture capital firm American Research & Development came up with $70,000 to buy 70% of DEC, an investment that came to be worth $355 million.

But even AR&D wasn't sure that a "mini computer" would make it, so the firm forced Olsen to talk about making "computer modules" that could be sold to developers. Olsen once told me that Doriot was concerned that DEC's directors were too old and feared it would take the company too long to make it in computers, so Olsen and Doriot thought that a shorter horizon would make the investment seem less risky and the directors could see results before they died.

The computing world at the time was run by High Priests who kept their computers in air-conditioned temples and behind locked and guarded gates. IBM genuflected to customers' every need and all things sacred were centralized; revisionism was a punishable crime.

But DEC's minicomputers were so cheap and rugged that they could be placed right in the lab or on the factory floor. Each one could be cost-justified based on the specific job it did. The heretics had taken over and the world would come to an end!

But maybe letting the light in and unleashing that computing power was a good thing. And the angels sang.

Before DEC, computing was scarce and precious. After DEC, computing costs dropped like a rock and the early PDP-8s and PDP-11s proliferated like rabbits. It really wasn't the IT department that bought these minis; it was the factory or lab manager.

Thing was, to be a DEC customer you had to be a company that was technically proficient and capable of running your own environment. So its customers tended to be companies such as TRW, GE, Foxboro and DuPont. There wasn't much early software, and what was there tended to be buggy. The DEC customers would take what they could get and then send the corrections back to DEC and thank it for the opportunity. In fact, DEC was kind of a cult. Its customers gobbled up more powerful DEC computers as soon as they came out.

Olsen did a few things very well. He invested in new technology, jumping on it early. DEC.com was registered in 1985!

DEC understood collaboration well before other companies and actually was ahead of Lotus Development for a time. It was the first computer company to open a public website, and its Alta Vista was one of the first comprehensive Web search engines. On the other hand, DEC never paid its salespeople a commission. Olsen didn't want his salespeople to "push" computers where they weren't needed, and he believed that salespeople deserved the respect of his engineers, and they weren't paid commissions. (You can imagine how well that turned out.)

Even as DEC racked up higher sales and profits and was becoming a big pain in IBM's butt, it knew its place: in the lab and the factory. But all that changed in 1984. One of DEC's biggest customers. DuPont, wanted something special. It wanted to tie its offices together. It wanted email, word processing, directory, document filing and calendaring. In short, DuPont wanted a suite, and it wanted it all from one company. DuPont didn't want to buy "best of breed" and have to be its own systems integrator.

Global CIOs: A Site Just For You
Visit InformationWeek's Global CIO -- our online community and information resource for CIOs operating in the global economy.
So DuPont went to its favorite vendor, DEC. It realized it could gain enormous productivity if all these functions were on a mini, especially a mini that could network with other minis. DuPont was so sure that this was what it needed that it actually paid Digital to develop it for them. Somebody at DEC was very bright and decided that if the company made this offering industrial strength, it could take on IBM and Wang in the office.

DEC started to go mainstream. Even IBM diehards such as American Express and Phillip Morris were becoming intrigued with the higher performance and lower cost of minicomputers. I remember hosting a few dozen of these Big Blue customers, who were bitching about DEC's lack of handholding. "If we have a problem, IBM parachutes a dozen people in the next day. DEC won't," they told me. I explained to them that IBM could afford to do that when its computers cost $2 million and mainframe software was more profitable than cocaine. "IBM can do that if you stay with PROFS, which costs you about $1 per email message, but it can't afford to do that if you go to IBM minis," I told them. They grumbled, but they bought DEC solutions.

And it wasn't just DEC that was winning. HP was in the business, Data General, Wang, Prime and a host of others. But at its peak, DEC was the second-largest computer company in the world. It had 100,000 employees. A key executive, Gordon Bell, led DEC into building powerful, modular software so that its customers could cut development time.

By the early 1990s, DEC started to falter. It merged with Compaq Computer, an early power in home computers, which itself merged with HP, which has been having some problems, as you may have heard. But at its peak, DEC stood astride the computer world with first-rate hardware, pretty good but underpowered software and a crack team.

If Olsen had a weakness, it was a bias toward hardware and a disdain for software, which he viewed as a necessary evil. Ed Roberts, who teaches at MIT Sloan and who was on the board of a healthcare software company, remembers Olsen saying dismissively: "You guys don't understand. It's not the software. It's the iron."

OK, he got that one wrong. But by getting computing power out of the hands of the High Priests and into the hands of actual users, Olsen led the way into the Internet, personal computers and even smartphones.

A flat network or fabric provides more paths through the network and can maximize bandwidth and better support a highly virtualized data center. Get our Understanding Flat Networks for a look at standards-based approaches to designing a flat network. (Free registration required.)

One thing DEC did right, which wasn't hardware, was VMS. An operating system for the ages. It is 35 years old now.
Reply  |  Post Message  |  Messages List  |  Start a Board

Excellent discussion of Ken Olsen and DEC. He had one great insight into the potential of the minicomputer and built a company around it. He extended that insight when he formed the alliance that brought Ethernet and All-in-One software to the minicomputer. He was an excellent "packager" of the technologies contained in a minicomputer. Unfortunately, Olsen didn't have follow up insights equal to his first. His board should have realized it and named the inventors of Alta Vista and VMS to take DEC in a new software direction,.But they couldn't do it. When Ken Olsen was no longer capable of leading, the board couldn't make the call and the company declined. It's a case study for why investors should look for a company that includes a board that's shown it can think and decide. Charlie Babcock, editor at large, InformationWeek and former editor, Digital News, covering DEC,
Reply  |  Post Message  |  Messages List  |  Start a Board

How about Dave Cutler. He had a big impact on DEC S/W and MS/NT
Reply  |  Post Message  |  Messages List  |  Start a Board
Editors' Choice
Hot Topics