50%
Tweet
In this fourth installment in our series, Howard Anderson tells how a masterful inventor and a business genius transformed communications.

Wait, was Bell really such a great inventor? He didn't even know what every other inventor playing with electricity already knew: that it was impossible to send a voice call over telegraph wires! So Bell pursued the idea with the help of his father-in-law, who bankrolled his experiments.

By 1876, Bell was the first to patent the telephone, beating Elisha Gray to the patent office ... by five hours. Three days after he filed the patent, he actually got his telephone to work by transmitting: "Your call is important to us ... please hold." No, he actually said to his assistant: "Mr. Watson: Come here. I want to see you." Watson immediately filed a class action suit for harassment. (Whoops. No, he didn't.)

Bell and his father-in-law attempted to sell Bell's patents to Western Union for $100,000, and Western Union turned them down. Supposedly, Western Union's CEO said something like: "Mr. Bell, the obvious conclusion of your idea would be we would have to wire America -- clearly not feasible," ensuring his inclusion in "The Great Dumb Acts In Technology History." 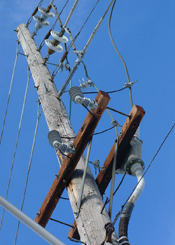 Bell was the inventor, but he wasn't the businessman. By 1878, Theodore Vail became general manager of AT&T and its guiding force. Vail pushed for long distance service and made AT&T expand nationally.

But Vail's real contribution came after he left the company in 1889 and returned in 1907. By that time AT&T was headed into a windstorm: Its early patents had expired and small companies were nipping at its heels.

Vail began what became Bell Labs and used the company's equipment subsidiary, Western Electric, to make the best and most reliable equipment. He built an extraordinary long distance network and let the local competition interconnect to it, but his greatest feat was convincing America that a "national monopoly" was in its best interests. Instead of maximizing profits, he sold the idea of universal service, whereby everyone would have equal access and pay similar fees.

Eventually, the company grabbed 100% of the U.S. long distance market and 90% of the local telecom markets. And Ma Bell was born. By 1914, it was possible to call from New York to San Francisco; by the next year, calling Europe through an undersea cable was a reality.

In my office I have a 1908 Kellogg crank phone with a handle that would ring up "central" and connect the caller to an operator, who would connect to the final party. This was way before rotary phones and phone company switching.

Kellogg Telephone Co. was purposely violating AT&T's patents by selling equipment to these upstart independent phone companies, which were AT&T's nemeses. But Kellogg was secretly owned by AT&T, whose grand scheme was to get those Kellogg phones declared in violation of its patents, and hence illegal, in order to force the upstarts that had bought that equipment into bankruptcy.

When this fact became known, AT&T backed off, and it was Vail who understood that such behavior, which was the sort of thing J.P. Morgan and his pals used to do, wouldn't be amicable to having the sweetest monopoly since Rockefeller's. Remember that this was shortly after Teddy Roosevelt had railed against the malfeasance of evil monopolists. 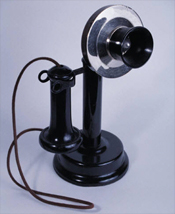 In short, Vail steered AT&T into the realm of the blessed. AT&T effectively kept its communications monopoly until 1984, after the Carterfone decision allowed interconnection of hardware and the MCI decision ushered in long distance competition. But for 80 years AT&T flourished as a protected monopoly under beneficial regulation while Rockefeller's Standard Oil was split into half a dozen companies. Vail gets the credit for pulling off the public relations coup of the century, and I do mean century.

Vail pushed for a closed system, centralized planning and end-to-end ownership. AT&T owned the long distance network, most of the local networks, the equipment provider and the research organization. He convinced Woodrow Wilson that this vertically and horizontally integrated system, operated as an "enlightened monopoly," would be best for the country.

Technology wars usually pit the Attackers against the Defenders. Western Union owned the telegraph market and was in denial that an upstart such as AT&T could make its own monopoly obsolete. Defenders go through four distinct phases: They insist the new technology won't work; they say their customers don't really want it; they concede that, well, maybe it does work so they should try it; then it's game over.

Western Union's dominance was kind of like that of the Pony Express: It was very important and innovative for a short period of time, and then it got completely outflanked by better technology and better management.

Imagine that you're J.P. Morgan and you're offered both Bell and Thomas Edison as an investor, and you can pick only one of them. Which would you choose? But wait -- we have an even better offer! Next week we'll profile Edison ... then decide.

We welcome your comments on this topic on our social media channels, or [contact us directly] with questions about the site.
Comment  |
Email This  |
Print  |
RSS
More Insights
Webcasts
Emerging Security Threats Your Enterprise Should Be Aware Of
5 Ways to Jumpstart AI
More Webcasts
White Papers
Vulnerability Management for Dummies, 2nd Edition
2020 Trends to Watch: Cybersecurity
More White Papers
Reports
The New Face of IT Automation
State of Cybersecurity Incident Response
More Reports

Well, you could argue that Apple's engineers didn't really invent anything either, they just cribbed a bunch of cool tech from Xerox PARC -- it doesn't make the impact of the GUI or the mouse on the history of technology any less important simply because more people know Steve Jobs' name than Doug Engelbart's. But yeah, let's hear it for Reis -- and no doubt Tesla will get his own entry (rather than being a footnote to Edison).
Reply  |  Post Message  |  Messages List  |  Start a Board

Bell didn't invent anything, if at all he improved the invention of Johann Philipp Reis. Reis even coined the term "telephone". How many more times does history get distorted? At least Bell understood the technology, unlike Edison who scammed Tesla for ideas and inventions. So yea, will be interesting to see if the Edison article is littered with myths, half-truths, and lies as well. And the first sentence send via telephone was "Das Pferd i+t keinen Gurkensalat!"
Reply  |  Post Message  |  Messages List  |  Start a Board