Toyota is the latest automaker to announce a timeline for including self-driving features in its vehicles. Within the next five years, the company expects to add driver assistance systems into its vehicles to perform safety-related maneuvers designed to avoid collisions.

Toyota Motor is planning to integrate various self-driving features into its vehicles within the next five years. The latest announcement comes as the company seeks to leverage its $1 billion investment in autonomous vehicle research, and stay in the game as its competitors race toward putting self-driving cars on the road.

This type of "guardian angel" driving is being developed in the TRI in Palo Alto, Calif., one of three such centers the automaker has opened since last year. In an announcement earlier this year, the company explained the focus of each of its TRI locations. The Palo Alto TRI focuses on assisting drivers when needed. Its TRI center in Ann Arbor, Mich., will delve into fully autonomous driving, while its TRI center in Cambridge, Mass., will focus on deep machine learning and simulation. 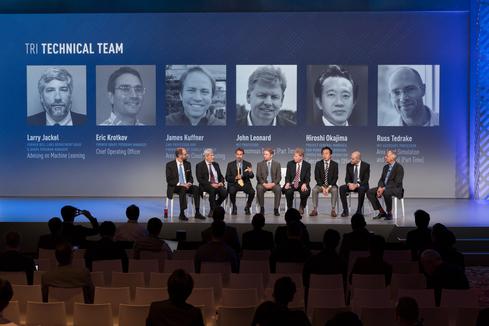 When Toyota announced its $1 billion investment to create TRI centers, it emphasized that its use of AI and robotics would extend well beyond the self-driving car, and include uses in the home and other applications. Although Toyota relies on vehicle sales to drive its business, it is also apparently considering ways to develop other sources of revenue in light of aging populations in the US and Japan.

For example, self-driving cars could serve as a useful tool for those whose mobility is restricted. Toyota may be banking on the notion that having other automated, machine learning devices in the home would also be beneficial.

In the meantime, Toyota is in a race with other automakers and technology titans to get its get self-driving cars on the road.

Nissan, for example, last year announced tests of a driverless prototype car. The company expects to have the vehicle ready to navigate heavy highway traffic by the end of 2016. By 2018, Nissan is aiming to have its test car handle lane changes on multilane highways.

BMW expects to release its self-driving iNEXT electric car in 2021. Autonomous driving pioneer Google and high-end electric carmaker Tesla Motors already have test vehicles out on the road and are seeking to get them fast-tracked to market.

All of this effort aside, how soon will consumers be ready to embrace driverless cars? Perhaps a staged approached to automated driving may be the path to follow.

Dawn Kawamoto is an Associate Editor for Dark Reading, where she covers cybersecurity news and trends. She is an award-winning journalist who has written and edited technology, management, leadership, career, finance, and innovation stories for such publications as CNET's ... View Full Bio
We welcome your comments on this topic on our social media channels, or [contact us directly] with questions about the site.
Comment  |
Email This  |
Print  |
RSS
More Insights
Webcasts
Building Asset Management into Your Enterprise Security Strategy
Advancing the Hybrid Cloud & App Modernization Journey with IBM
More Webcasts
White Papers
A New Take on Cloud Shared Responsibility
Addressing Complexity and Expertise in Application Security Testing
More White Papers
Reports
Protection Strategies for a Cyber-Resilient Organization
Building the SOC of the Future
More Reports

Automated vehicles scare the bejeezus out of me though precisely because they do not act like human drivers and operate on their own logic -- which is why they've been involved in so many crashes.
Reply  |  Post Message  |  Messages List  |  Start a Board

@SaneIT: I think the best way to describe the USA is that we have more problems in certain areas than other countries do that are connected to the enhanced freedoms we enjoy.  Driving independently on the open road is one of those things.  Is freedom optimized for safety?  Of course not -- just the way in technology how accessibility and security are mortal foes.  It's just a matter of our values system.

Personally, I like the freedom to be able to drive as a qualified and skilled driver -- and it's not one I would like to give up.
Reply  |  Post Message  |  Messages List  |  Start a Board

Proliferating autonomous cars is an attempt to turn roads and highways into a form of mass transit.

Given that Americans like their cars and dislike mass transit (who, other than hipsters -- who like all things terrible -- actually likes riding on a crowded, dirty, slow subway, train, or bus?), I suspect the AI crowd has their work cut out for them.
Reply  |  Post Message  |  Messages List  |  Start a Board

You have great ideas. You should work in public transport city planning, or something like that. :)

Did I tell you that I am attending 5G World, Connected Cars, and Insurace Telematics in London this week?

With such car, busy parents with kids could have great help when it's time to take kids to school and back. Many may not see th epotential yet, but autonomous cars are going to become a great tool with many applications.

@SaneIT: Indeed, I definitely understand and appreciate how this technology can be applied in commercial and industrial settings.

For personal use, the safety features are great, but anything beyond that I think will (and ought to) come down to personal preference.

That's a smart idea that should be difficult to put into practice. Those vehicles you envision could be used as public transport, and maybe by companies, something like an autonomous school bus. What I tried to say by showing you the trucks is that if they have thought about solutions to make logistics easier, saving time and money, in the same way  they could find similar solutions to replace the painful city buses like the ones you describe.

Your smaller vehicles idea should reach those who can make the change. :)

Volvo connected trucks used by logistics companies already exist. More autonomous feautures will be added as the technology advances and is adopted. These trucks make truck drivers life much easier, since drivers can have some hours of sleep. They save fuel and are safer since they eliminate road accidents caused by human error.

The same could be done with public transport systems. I see what you say viable for trials in current real smart cities, like Nice, for example.

Watch a platoon that recently completed a journey across Europe.

Absolutely. Both groups you mention will benefit from AI and autonomous cars. It's not only in the US that it is noticeable less emphasis among the 16 to 18-year-olds around driving their own car. The same I have noticed in Europe.

I would make a difference, though, between having a driver's license and driving their own, or family owned car. Car share seems to be an option that many are taking. Then you have places like Amsterdam where there are more bicycles than cars.

I completely agree with you about the kids who are born today. If we are expecting fully autonomous cars to be common by 2020-2021, by 2034 when those kids will be 18 most likely they won't choose to own an old car. And by then, every new car will be fully autonomous. In 20 years' time driving as we know it will be rare.