The Enterprise Prepares for IoT - InformationWeek

IoT isn't quite mainstream yet, but analysts and consultants agree that the opportunity is huge, and it's time for enterprises to get ready.

Enterprise IT organizations are deeply familiar with the concepts behind the Internet of Things -- connected devices that generate and harvest data and can be monitored to help predict problems, needed maintenance, and replacement. IoT extends that idea beyond the IT infrastructure to an enterprise's other assets such as manufacturing equipment, vehicles, field devices, and even products offered to customers.

It's an idea that has captured a lot of imaginations so far, and the implementations that have gotten the most mainstream attention are things like smart speakers (Alexa Echo and Google Home), smart doorbells, and smart thermostats -- all for consumers. 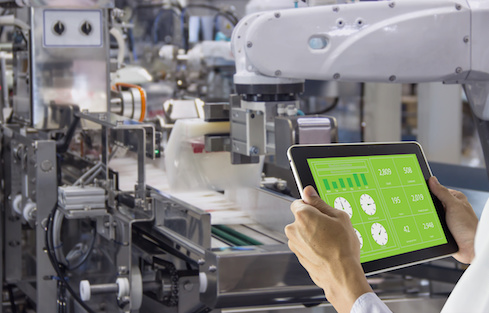 Business implementation is happening, too, and it has really varied by vertical industries. Smart manufacturing operations "where raw materials come in and finished goods come out without any human hands touching them," is a primary example of a pretty advanced implementation of IOT, according to Intel IoT Group VP and CTO Brian McCarson. The company has implemented such systems in its own semiconductor manufacturing. Intel believes this advanced use of IoT represents the third and most advanced phase of IoT implementations -- a "software-defined autonomous world." The two earlier phases are first, "connecting the unconnected," and second, "building smart and connected things," according to Intel.

Intel's a good example of a company using and promoting IoT, and the technology is gaining momentum elsewhere, too.

Organizations were also showcasing IoT together with complementary technologies at January's National Retail Federation Big Show in New York. For instance, a few exhibits featured unstaffed stores that relied on computer vision, IoT, and machine learning to securely enable customers to buy products -- say a candy bar or bottled water -- without interacting with anyone. Other demos at the event featured robots and drones monitoring store inventories and replenishing them.

A report from McKinsey Global Institute estimates that IoT could generate $11.1 trillion a year in economic value by 2025. Among the top vertical implementations expected are factories, cities, human and healthcare, retail, logistics routing and autonomous vehicles, and navigation.

"Our central finding is that the hype may actually understate the full potential, but that capturing it will require an understanding of where real value can be created and a successful effort to address a set of systems issues, including interoperatibility," said MGI partner Michael Chui, in the report.

IT leaders and enterprise organizations need to look at where this technology can be applied in their own businesses.

"The IoT will continue to deliver new opportunities for digital business innovation for the next decade, many of which will be enabled by new or improved technologies," said Nick Jones, research vice president at Gartner. "CIOs who master innovative IoT trends have the opportunity to lead digital innovation in their business."

Gartner has forecast that 14.2 billion "connected things" will be in use in 2019, and that number will reach 25 billion by 2021, producing an immense volume of data.

"Data is the fuel that powers the IoT and the organization's ability to derive meaning from it will define their long-term success," said Jones. "AI will be applied to a wide range of IoT information, including video, still images, speech, network traffic activity, and sensor data."

While organizations have plenty of other cost-effective alternatives for IoT networking, 5G has a lot of appeal.

"5G is uniquely positioned to deliver a high density of connected endpoints -- up to 1 million sensors per square kilometer," said Sylvain Fabre, senior research director at Gartner. "Additionally, 5G will potentially suit other subcategories of IoT that require very low latency." Those could include video analytics and collaboration.

Whatever application you are planning for your IoT implementation, the time to get started with it is now.  Gartner has placed IoT platforms just past the "peak of inflated expectations" in a Gartner Hype Cycle report released last summer, and indicated that the technology is expected to reach the "plateau of productivity" in 5 to 10 years. That means now is a good time for enterprises to begin their investigation and investment into their own IoT strategies.

Jessica Davis has spent a career covering the intersection of business and technology at titles including IDG's Infoworld, Ziff Davis Enterprise's eWeek and Channel Insider, and Penton Technology's MSPmentor. She's passionate about the practical use of business intelligence, ... View Full Bio
We welcome your comments on this topic on our social media channels, or [contact us directly] with questions about the site.
Comment  |
Email This  |
Print  |
RSS
More Insights
Webcasts
What We Can Learn from Sports Analytics
Building the SOC of the Future: Next-Generation Security Operations
More Webcasts
White Papers
Eliminate East-West Traffic Hair-Pinning
2020 Gartner Market Guide for Network Detection & Response
More White Papers
Reports
The State of Threat Detection and Response
Special Report: Understanding Your Cyber Attackers
More Reports