LAS VEGAS -- Microsoft is deepening its foray into connected cars, as indicated by updates on its partnerships with Volvo, Nissan, Harman, and IAV. Announcements came from the 2016 Consumer Electronics Show (CES) taking place this week in Las Vegas.

The future of cars is a core trend of this year's show, along with home automation technology and next-generation health wearables. As connected car tech continues to evolve and driverless cars consistently garner attention, consumers will begin to demand more from their vehicles.

Microsoft isn't new to the connected car space. The tech giant has also partnered with Toyota, Ford, Qoros, Delphi, and others to integrate its products and services into automobiles.

"In the near future, the car will be connected to the Internet, as well as to other cars, your mobile phone and your home computer," Microsoft executive vice president for business development Peggy Johnson said in a blog post. "The car becomes a companion and an assistant to your digital life. And so our strategy is to be the ultimate platform for all intelligent cars."

This week's announcements will focus on car safety, creating a more personalized experience behind the wheel, and in-vehicle productivity.

That's right -- Microsoft wants you to take your work on the road. This comes as part of a new partnership with Harman, a company focused on connected technologies for the automotive, consumer, and enterprise markets.

The general idea behind their collaboration is to build mobile productivity services, Harman said in its announcement. The two will also leverage existing products and services, including telematics, cloud platforms, and productivity tools.

More specifically, their partnership will bring key components of Microsoft's Office 365 suite to Harman's infotainment systems. Users will be able to access the productivity suite via intelligent personal assistant software while on the road.

Without compromising safety, mobile workers will be able to hear and respond to emails, schedule meetings, join conference calls without manually inputting phone numbers, and manage tasks throughout the day. Drivers will eventually be able to hold Skype calls while in park or while driving an autonomous vehicle.

Volvo is planning to enable users to communicate with cars via Microsoft Band 2. New concepts will integrate the latest Band with a Windows 10 smartphone and the Volvo On Call Universal app.

Wearers will be able to set navigation, lock doors, turn on the heat, flash the lights, or sound the horn through the wearable and its compatible app. Volvo released similar apps for Apple Watch and Android Wear earlier this year, but both lacked the voice control of Microsoft Band.

While it sounds futuristic, the Band 2 integration will be ready sooner than you might think. Volvo reports it will be generally available to consumers in the spring of 2016. 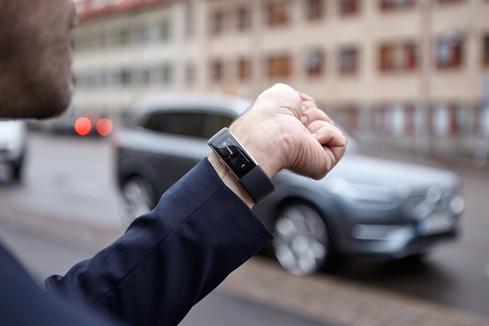 It hasn't been long since Microsoft and Volvo partnered to revamp the car-buying process using Microsoft’s HoloLens. The augmented reality headset will reportedly enable consumers to configure cars in 3D, check out the car's interior, and view its drivetrain in action.

IAV is planning to use Windows 10 Continuum to stream Windows 10 to the dashboard via mobile device. Drivers will be able to use apps like Cortana, Skype for Business, Calendar, Outlook, and Groove Music while the car is parked or in autonomous driving mode.

At CES, the two companies will also demo how vehicle-2-x communication (V2X) connectivity can improve safety by gathering data from the car's surroundings.

Microsoft and IAV plan to incorporate the Azure IoT Suite, Cortana Analytics, and connected vehicle and infrastructure data into a solution that will predict vehicle and pedestrian accidents. The idea is that a connected car will be able to sense risks in the surrounding environment and adjust its driving to avoid a crash.

Nissan and Microsoft have announced that all of the automaker's LEAF and European Infiniti models will be equipped with Connect Telematics Systems (CTS) powered by Microsoft Azure. The cloud platform provides secure connectivity for drivers using electric vehicles.

Kelly Sheridan is the Staff Editor at Dark Reading, where she focuses on cybersecurity news and analysis. She is a business technology journalist who previously reported for InformationWeek, where she covered Microsoft, and Insurance & Technology, where she covered financial ... View Full Bio
We welcome your comments on this topic on our social media channels, or [contact us directly] with questions about the site.
Comment  |
Email This  |
Print  |
RSS
More Insights
Webcasts
Securing and Monitoring Networks in the 'New Normal'
Strategies for Success with Digital Transformation
More Webcasts
White Papers
Five Reasons to Protect your VPN with Multi-Factor Authentication
IDC Workbook: Best Practices for Cloud Security
More White Papers
Reports
The Malware Threat Landscape
The Drive for Shift-Left Performance Testing
More Reports

Except for remote autostart and wifi, I wouldn't even know what to ask for with connected cars. A lot of the amenities they put in cars now don't even interest me.
Reply  |  Post Message  |  Messages List  |  Start a Board
Editors' Choice
Hot Topics