C3 IoT is Tom Siebel's latest venture. The young Redwood City, Calif-based company is off to a fast start with industrial IoT applications, and now it's bringing a cross-industry platform to market.

If you are a smartphone user or smart home occupier, one of your devices may be connected to C3 IoT in the near future.

C3 IoT has a set of 11 practical, IoT applications already written and implemented by 20 customers, and its public utility system is one of the largest IoT production systems in the world. The public utility system collects data from energy companies in Italy, Spain, and other parts of Western Europe via 70 million sensors. The data is fed into C3's collection and analysis systems.

[Want to see what GE is up to with Predix? Read GE Supplies IoT Developer Kit for Predix.]

C3 IoT is among the ranks of recent IoT startups, including Uptake.io, Carriots, Wireless Logic, Kepware, ThingWorx, and PTC.

The domain is certainly not limited to startups. GE is a major IoT player with its Predix analytics system and its planned rollout this year of multiple Predix-as-a-service data centers. Microsoft offers its own IoT services from its Azure cloud. Siemens, IBM, and Intel all claim to be investors in the internet of things.

GE is also aligning itself with startups such as PTC. PTC acquired ThingWorx, a software platform for developing IoT apps, for $112 million at the end of 2013, then formed a close alliance with GE in fall 2015. PTC then acquired Kepware, a connectivity platform for industrial devices, for $100 million in January of this year. The GE/PTC partnership has launched what it calls its Brilliant Manufacturing Suite.

Siebel, still feisty after making his first $1.9 billion in the software market, claims other contenders can't yet match what C3 IoT is doing. "We are two to three years ahead of every other company," Siebel said in an interview with InformationWeek. "All those other companies have zero IoT production applications."

Siebel is measuring the competition by the number of devices they collect data from -- one standard for evaluating an IoT company. Boston-based market researcher Lux Research has applied such a standard in the IoT market segment and concluded that GE/PTC will have 200,000 to 500,000 devices under management by the end of 2016.

According to a May report from Lux lead analyst Isaac Brown, this puts GE/PTC in the class of "a baby startup, with minimal market penetration." In comparison, Brown's report listed Wireless Logic as having 2.1 million connected devices, and Carriots and Plat.One as each having 200,000 at the end of March.

A Start in Utilities

In one customer case, C3 IoT is collecting 350GB of data per day and entering it all into a 7 billion-row database, which has already accumulated 750TB of data, Siebel said. C3 IoT, however, wasn't originally conceived as an IoT player. It was previously known as C3 Energy. The IoT addition to its name is a relatively recent phenomenon.

C3 came to the industrial internet by way of instrumenting and analyzing data from gas and electric utilities. Pacific Gas & Electric is one of its customers, along with the New Orleans giant Entergy.

The young C3 Energy struck pay dirt in Europe, where it signed up Enel (National Entity for Electricity) in Rome, running utilities in Italy and Spain, as well as Engie in Courbevoie, France.

With those two customers, it installed "the largest set of IoT production applications on earth," Siebel said.

"More than 80% of European smart meters are under management by the C3 IoT platform," said market research firm Harbor Research, which issued a report on C3 and the IoT market in July.

C3 has brought 11 of its planned 15 utility applications to market, and it's working on the rest. More importantly, it has built a development platform for IoT applications that Siebel and his company have already proven in the utility industry.

At C3, Siebel has assembled a core development team made up of former Siebel Systems and Oracle employees. (Oracle acquired Siebel Systems in December 2006 for $6.1 billion.) The team has been through several generations of software development disciplines, and debated how best to approach the complex data gathering, collecting, interfacing, and analysis of masses of data off the internet of things.

Some 70 of the company's 105 employees are software engineers. They have taken a model-driven approach in creating an IoT platform that consists of approximately 1 million lines of Java code.

"We are a model-driven architecture," Siebel said, dropping an inch-and-a-half-thick patent application on his office's coffee table during our interview. "We used a completely different generation of software. All those other companies are using structured programming ... and trying to cobble together the pieces."

The approach gives C3 IoT a platform that can combine the use of big data and machine learning applications in order to aid in the collection of data from thousands of different devices. Although the company's primary customers in its first two years have been utilities, it's now also selling its IoT platform to companies in manufacturing, healthcare, and financial services.

Building on a Legacy

Siebel has been adventurous before and found it paid off. For example, his creation of Siebel Systems brought salesforce automation to the IBM mainframe when no one had considered using it for that purpose.

Siebel graduated from the University of Illinois at Urbana-Champaign with a master's degree in computer science, as well as an MBA. He started out at Oracle, where he was interviewed for a job by Larry Ellison personally and counted himself as employee number 20.

Down but Never out

Three years after Oracle bought Siebel Systems, Siebel was on a walking safari in Tanzania, during which he and his guide, who thought they were a respectful distance from the herd, were charged by an alarmed elephant.

The guide was armed with a powerful rifle and had warned Siebel not to run if charged, because a wild animal would then be encouraged to attack them. The elephant rapidly closed the 200 yard distance, ignored the guide firing a shot over its head, seized the guide, cast him 10 feet aside, and proceeded to confront Siebel.

It was then, with elephant so close he could smell it and count the hair follicles in the trunk, Siebel later told Forbes, that he asked himself, "What are we going to do now?" 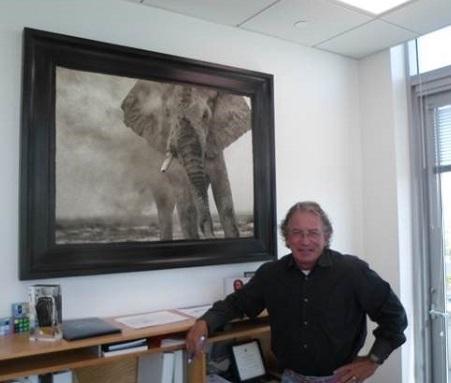 The elephant answered by striking him down, goring him through the thigh with a tusk and stepping on his leg. Siebel survived the attack, but his tibia was broken in so many places that it would require 16 reconstructive surgeries and a long convalescence back in the US.

His current adventure, sallying forth with a new software company into IoT, can't quite match the safari. Nevertheless, Siebel knows he previously enjoyed a big opportunity in launching salesforce automation on the mainframe, and the IoT opportunity is much larger than that.

"We did something important at Siebel Systems and at Oracle too," Seibel said. But if C3 creates a platform that becomes a leader in IoT applications, or sets a cross-industry standard for how to create IoT applications, that "would be a lot more important," he said.

[Editor's note: This article has been corrected with the number of sensors GE hopes to have under management by the end of 2016, according to Siebel, and the number of customers C3 IoT is collecting data from, in the case mentioned.]

Charles Babcock is an editor-at-large for InformationWeek and author of Management Strategies for the Cloud Revolution, a McGraw-Hill book. He is the former editor-in-chief of Digital News, former software editor of Computerworld and former technology editor of Interactive ... View Full Bio
We welcome your comments on this topic on our social media channels, or [contact us directly] with questions about the site.
Comment  |
Email This  |
Print  |
RSS
More Insights
Webcasts
Building the SOC of the Future: Next-Generation Security Operations
Making Cybersecurity Work in Small and Medium-Sized Businesses
More Webcasts
White Papers
The State of Threat Detection and Response
Threat Intelligence Solutions: A SANS Review of Anomali ThreatStream
More White Papers
Reports
Assessing Cybersecurity Risk in Todays Enterprises
Email Security Threat Report 2020
More Reports

So what did the market research say about C3 IoT itself? Harbor Research analysts Alex Glaser and Glen Allmendinger said: "Competitors such as GE and Siemens are likely at least 2-3 years behind C3 Iot from a product development stand point, while all of C3 IoT's competitors have a huge amount of catching up to do in terms of customers and devices under management."
Reply  |  Post Message  |  Messages List  |  Start a Board

Can C3 IoT really move beyond the utility industry into other industry segments, or is that wishful thinking? On July 18, the U.S. Department of State issued a multi-year, $25 million contract to C23 IoT to provide sensor data collection and energy management for it s 22,000 facilities worldwide. The applications will run on Amazon Web Services GovCloud. It's the first federal agency to adopt a global IoT analysis application.
Reply  |  Post Message  |  Messages List  |  Start a Board
Editors' Choice
Hot Topics

More Informa Tech Live Events
Building the SOC of the Future: Next-Generation Security OperationsMaking Cybersecurity Work in Small and Medium-Sized BusinessesROI and Beyond for the Cloud