What's that? Your product is the code and the code is the product and automation is your middle name? How nice. You're the digital 1%.

Remember the hand wringing over the digital gulf between rural and urban Americans? We may not hear about it as often, but a big chunk of the population is still lucky to have 5 Mbps Internet links and thinks Between Two Ferns is an ironic hipster bar. Only a select few get to debate the merits of Google Fiber versus Verizon FiOS.

The latest iteration of the digital divide is happening inside corporate IT organizations. It's between companies with an Agile ethos baked in and those with more conventional IT shops. I recently attended a roundtable where Alan Shimel, editor in chief of DevOps.com, led a discussion on topics including whether the title “DevOps Engineer” is (or should be) a real thing, why DevOps is the last best hope for information security, and the concept that anyone can write Chef code.

We all need something to aspire to.

DevOps, in case you haven’t been paying attention, is the practice of adding Agile principles to the full IT lifecycle, ending the practice of developers writing code in a vacuum and then throwing it over the wall, leaving the operations team to figure out how to efficiently run it. DevOps is a great idea. InformationWeek's 2014 DevOps Survey shows it has traction, and it will likely be, if not the last hope, very good for security.

However, you have to wonder what the CIO of a traditional enterprise with a portfolio of 1,200 products, 16 datacenters, a few hundred branch or retail locations, and a few dozen just-won't-die legacy applications that have been running for 20 or 30 years is going to do with all this agility angst. 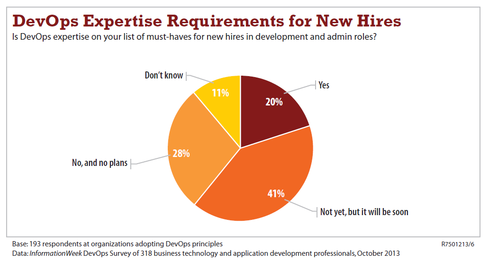 Purists may mock the term "DevOps Engineer," but there's no doubt hiring managers are looking for this expertise.

Andi Mann, VP of business unit strategy at CA Technologies, coined the term "big DevOps" to describe just that conundrum: Large, complex organizations that have been around for decades will have a difficult time adopting DevOps. In fact, what they eventually do may not look like “pure” DevOps at all. Yet they badly need the collaboration, flexibility, and speed of execution continuous improvement provides (Mann’s presenting on the topic at the InformationWeek Conference).

IT's seen this adoption gap before. “We could say the same about SDN, cloud, or big data analytics,” he says.

What’s different here is that you don’t need to buy new technology to start along the road to DevOps. It’s about a new way of working. Eventually, CA and other providers of automation suites do expect DevOps to bring about a renewed push to automate IT processes and software release cycles, which is certainly a worthy goal (and a revenue opportunity). For now though, DevOps is about process improvement, a change that’s badly needed anywhere ops teams still impose an iron fisted “stability uber alles” status quo.

[ Join Michael A. Davis on April 1 at the InformationWeek Conference for our workshop, The DevOps Challenge. ]

Today Mann says most of CA’s Fortune 2,000 clients are doing DevOps in small pockets, picking their spots carefully. “No one is using DevOps on their ERP,” he says. Where else DevOps isn’t happening: Core banking systems, companies looking to maintain ISO 270002, and those subject to strict audit controls where separation of development and IT operations roles isn’t optional. In other words, places where constant change isn’t your friend.

Still, if you want to be Netflix instead of Blockbuster, you can’t avoid continuous improvement for long. Mann cites a recent survey that shows adoption of continuous delivery principles helped respondents bring new services and products to market 20% faster. Our own DevOps Survey provides a snapshot of adoption in larger organizations -- 27% of 318 respondents (all familiar with DevOps) have 5,000 or more employees; 20% are over 10,000. Twenty-one percent have implemented DevOps, and another 21% expect to within a year. Top drivers: the ability to deploy apps faster with less downtime and overall improvement in infrastructure stability.

There’s no doubt enterprises differ from the web companies that have pioneered DevOps. But you don’t have to be Netflix or Zynga, rolling out dozens of code updates daily, to benefit from getting apps to market faster and being more flexible in meeting customer demand. A natural entry point is in the team that's developing mobile apps. Consumers of mobile apps expect frequent updates, says Mann, so the DevOps concept of dropping one new feature at a time, seeing how it works, and circling back fits.

Don’t feel you need to get religious about the DevOps concept. If you can get your developers and operations team working together on some projects, don’t worry if certain systems stay off limits. “This DevOps branding feels a lot like how Scrum takes the concept of agile and makes it rigid,” warns one IT pro in our survey.

Finally, Mann says, bring business units into the process. “DevOps does not start with dev and does not end with ops,” he says. “It must start with planning. The business must figure out where to apply these principles.” Can you afford to manage another 35,000 lines of code? Do you have the discipline to continually improve?

If not, maybe it’s time to question your culture.

Nice discussion of DevOps, Lorna. I personally don't think it's critical what methodology or discipline you adopt to get to DevOps. It's more important that the wall between development and operations be broken down and the two parties be put in contact with each other for something other than an exchange of insults. Many ways to do that.
Reply  |  Post Message  |  Messages List  |  Start a Board

Good article pointing out the cultural and educational hurdles.   Because DevOps requires a cultural mindshift, EveryTown IT may not readily adopt DevOps principles and practices.   While tools are not a panacea, outdated infrastructure can hinder a team's ability to improve processes and automate tasks.   A DevOps PaaS (e.g. WSO2 App Factory) can ease adoption pain.

Yes, the principles of getting more done with the same or less resources have been around for some time. However, market pushes increase the visibility and help the market (think supply chain, cloud, etc.) and this causes reactions from many.

As for DevOps titles and roles this will be abused but for good reasons. There is a demand for devops resources but they don't talk about culture shift that big companies will require they talk about tools. Take this advertisement for example that is tool focused. This job requires 3+ years of "DevOps" experience yet labels the job as "Junior".
Reply  |  Post Message  |  Messages List  |  Start a Board

Yes Lorna, automation and tools are going to be more and more important, especially for large enterprises putting their toes in the water of 'big devops'.Almost impossible to go at 'devops speed' without them. They will become more important for HR scanning resumes too.

Though I actually wonder if things like "listening" and "teamwork" aren't better skills in practice? The research you pointed to shows IT leaders say the top 3 skills for DevOps teams are business strategy knowledge, business process knowledge, and communications skills. Tech and tools come much lower.

Surprising result in some ways, but when you consider the core values of DevOps, they make sense.

No worries! And yes, I guessed, but online it is not always easy to tell and I hate to risk offending. :)

Hi Laurianne, I do agree, there is a lot about DevOps that is not new. One of my colleagues has given a great preso at DevOpsDays titled "ITIL Invented DevOps" that has gone over very well, that points to exactly this. It is tough to recognize sometimes because DevOps is not very well defined, and not particularly proescriptive either.

One big difference (e.g. from Agile) is that DevOps is as much about revamping Ops process as it is about Dev process. But for sure, it does put a name to what a lot of people believe should happen, and what many have been doing for some time.

Yes, thanks Andi. I hear a lot of discussion about whether there should be such a title as "DevOps Engineer," and I can see both sides. However, as we all know, the HR teams charged with scanning resumes like to have nice, neat lists of keywords. Now the question is, what should one have to know to put "DevOps" on a resume? Chef & Puppet and the basics of what developers (if you're ops) do, or vice versa? Do you need expertise with automation systems? To know at least one programming language?

Thanks for the clarification...and yes, I was indeed joking.
Reply  |  Post Message  |  Messages List  |  Start a Board

GA, in many ways you are right. 20+ years ago, when I was in tech ops, we had programmers in the data center, on shift, working side-by-side with operators, even in a finance org.

But just as cloud shares characteristics with, but is not the same as, the on-demand compute services of 20 years ago, neither is devops the same today as the collaboration of the past. Newer capabilities & methodologies (agile, lean, automation, service virtualization, cloud computing) have changed how dev can go fast, and how ops can go fast. DevOps is a new approach to bring them together and take advantage of that opportunity to accelerate application delivery.

And yes, it is just good business sense, but that doesn't make it simple, or easy, especially when dev and ops barely see each other (e.g. when ops is locked in the data center, and devs are scattered around the globe).

DevOps is not only for larger businesses and organizations. In fact, adoption has been greater in small and 'web-scale' businsses (Zynga, Netflix, Amazon, etc.) where dev and ops work together more easily (and as you and Laurie both point out, have done for years). The challenges are greater in large enterprises, but the payoff is greater too. Bigger risk, bigger reward.

And I suspect you were joking, but 'DevOps' has actually become something hiring managers are looking for, and paying more for (for better or worse) e.g. here is a quick salary comparison from a job search website.