"PC" no longer means one desktop in a cubicle. Welcome to the increasingly composite world of office computing.

They were simpler times, when a desktop was a desktop, a laptop was a laptop, phones had a dial tone, and bread cost a nickel. OK, so maybe that's getting a bit carried away with the nostalgia. Suffice it to say, however, that times have changed for workplace technology -- perhaps for the PC more than anything else.

The PC has been evolving at a breakneck pace. It's no longer the only screen we spend our workdays staring at, either. But don't let anyone fool you: The PC isn't dead, especially not in offices. It's just no longer a straightforward, single-screen proposition for most businesses and their employees.

"Even by IT industry standards, the endpoint device market in 2014 is extremely complex, and subject to significant and abrupt changes," reads a new Techaisle report on the use of PCs and other "endpoints" -- namely, tablets -- in business environments. If anything, that might be an understatement.

The report, which included input from 820 businesses with up to 1,000 employees apiece, examines several phenomena for PCs in the workplace that both underscore that complexity and belie the notion that the PC is going the way of the feature phone. We'll dive into those trends here and in a subsequent piece.

"PCs are still the basic foundation block of a business," says Techaisle analyst Anurag Agrawal, via email interview. "The role of the PC is changing."

Welcome to the multi-screen era
Once upon a time the standard-issue cubicle setup for many workers was a desktop or laptop PC and a landline phone. Even once cellphones exploded on the scene, we didn't constantly fiddle with them because, well, they were pretty much just phones -- not that exciting unless they rang, at least not until they smartened up in the iPhone and Android era. Now, we toil in an age where three or more screens per employee aren't uncommon, thanks to mobile devices, BYOD, and other trends. 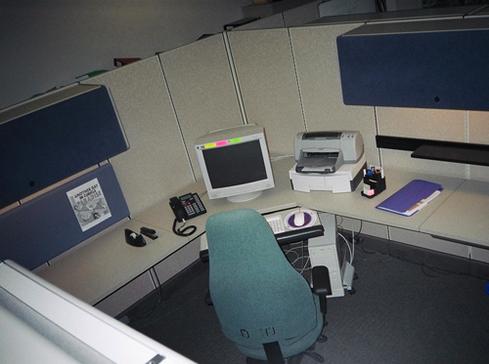 "PCs are not the only computing device now -- there are smartphones, tablets, and other wearables that will start appearing," Agrawal says. It's a view that generally jibes with Microsoft's newish view of personal computing, where the hardware and operating system become relatively anonymous background players and the "experience" -- everything that happens on screen rather than who made the screen or the OS behind it -- is the marquee star.

"Many users now opt for a multi-screen approach to personal technology: they use smartphones to communicate and to consume content, use PCs to

Tablets are definitely more portable, but our experiences have shown that indeed, sales people do still make presentations off of laptops - 100% of the time. I think the tablets mostly suffer from a good interface to the (ugh) VGA connections of most projectors that are used in conference rooms. In addition, the fact that laptops are easier and have no cost to connect to corporate networks, combined with the built in HDMI ports in almost every laptop, means that even if there is a big flat screen in the conference room, I don't need special connectors to tie into the existing equipment.

I am actually shocked to see how few sales reps actually have tablets. We have even seen one or two that have tablets, but bring their presentation on a thumb drive, to be used on our equpment.  Sadly, our sales force is no different - we give laptops to managers and sales people rather than tablets.  I think that smartphones and tablets suffer from the same issue - you need to carry special connectors for connecting to conference room equipment. Also, it's just easier to use the same device that you do your work on to present with.

Tablets are great for playing games and doing social media, but it's hard to get any real work done on them. I love typing on my iPad2, but 90% of the people I talk to find it tedious and troubling for work documents. I have tried to find use cases at work for some to justify a purchase and testing, but I just cannot find any.
Reply  |  Post Message  |  Messages List  |  Start a Board

We may not be seeing presentations on smartphones -- but just try doing a sales call with a clunky laptop. You'll get a snicker. Tablets have become mandatory for sales calls in a wide variety of industries. Whetehr hybrids will past the test with the sales crowd, we shall see.
Reply  |  Post Message  |  Messages List  |  Start a Board
Editors' Choice
Hot Topics