Microsoft opens the doors of its massive NYC flagship store the same day it releases the Surface Book and Surface Pro 4 to the public. 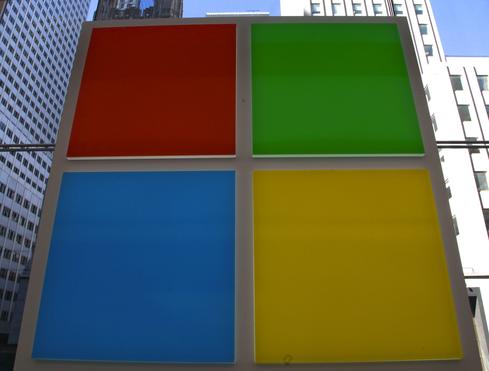 Microsoft's NYC store had its grand opening on October 26, the first day of general availability for its Surface Pro 4 and Surface Book laptop.

The Manhattan flagship is a monstrosity, measuring 22,269 square feet and spanning five stories. It's located at 677 Fifth Ave. between 53rd and 54th St., a short stroll from the iconic glass cube that marks Apple's retail store.

Microsoft, while primarily known for its software offerings, is making a clear push to boost its consumer presence. The flagship store is part of its efforts to increase customer interaction and put products in the hands of everyday consumers.

[ Surface in the workplace: Microsoft adds to Surface Enterprise program ]

"It is a concerted push to become a consumer brand, as opposed to a brand consumers know," Greg Portell, partner at A.T. Kearney, said in an interview with The Wall Street Journal.

Despite earnings results that reflect a decline in hardware sales, the tech giant is hoping to turn things around with a newly unveiled device lineup. Two of its new products – the Surface Book laptop and Surface Pro 4 – are generally available today, as well as new Surface accessories.

During its Oct. 6 hardware launch, Microsoft positioned its new laptop and upgraded hybrid against Apple's MacBook Air and MacBook Pro. Similarly, the layout of its flagship is reminiscent of Apple's many retail outlets, but with enough additions and variations that keep it from being a copycat.

Microsoft's largest store is a project several years in the making and doesn't fail to impress. There are several opportunities to test new products, learn about devices and services, and troubleshoot problems.

InformationWeek paid a visit to the NYC flagship on opening day to see the retail space in person. Here, we give you a firsthand look:

(All photos were taken by Kelly Sheridan)

I have to agree wholeheartedly.

Such Stores and Gyms are one of the best ways to do it.

@Ashish bookstores are so much less intimidating than gyms, right? I used to go to a Barnes & Noble that tried to attract families with story hour. I'm  not sure that store still exists, though.
Reply  |  Post Message  |  Messages List  |  Start a Board

It was precisely this News Story I was alluding to in my past comment.

I found it incredibly ironic that the company which endedup eating up more than a couple of major Book Vendors is actually entering that very same space all over again.

Tells you much about how fluid or otherwise these things can be in the future.

Lets not forget,Americans are now the fattest and most Drug-addicted Folks on the planet today.

Anything,which can get them out of their Homes and away from Depression(like in Reading books in a nice,well-lit and comfortable Bookstore) should be made more welcome.

@Ashish interesting that you mention Amazon in that context because it actually did recently open a retail store. See http://www.forbes.com/sites/robsalkowitz/2015/11/04/amazons-retail-store-has-nothing-to-do-with-selling-books/
Reply  |  Post Message  |  Messages List  |  Start a Board

Do you really think in the age of the Cloud ,do these Retail Stores really matter?

I tend to believe that they are actually just mere add-ons on the existing Marketing Budgets of Tech Stores.

Why else would Amazon(of all companies) also get into the Retail Store Business??

MSFT already has figured these issues out by virtue of their aggressive push of Azure as well as Office 365 Solutions(all in the Cloud) today.

Also,please note that most of their Major Software/Apps are now platform agnostic.

If they did'nt think this way of doing things made sense;There is absolutely no way they would have gone forwards along this route of Total Compatibility with the competition.

It just shows you very clearly,how forward-thinking the Current Team at MSFT is.

I have to defer from your comment... I think what we're seeing IS microsofting tryign something different. In the past the focus has been in the business environment, and we're now seing an effort to be part of the more main stream consumer market.

I do agree that because Apple literally defined the entire concept around providing products and services to consumers, I think microsoft is just following the same recipy (but hey.... I wouldn't want to have to reinvent the wheel either).
Reply  |  Post Message  |  Messages List  |  Start a Board

While this is a step in the right direction Microsoft will need more than just the store to catch up. They missed the entire mobile movement and now their catch up strategy must unhook Apple users to suceed long term. The store needs to be part of the strategy to achieve this end but not the only outward manifestation
Reply  |  Post Message  |  Messages List  |  Start a Board

@danielcawrey It seems that the Surface Book is something "completely new" (at least for Microsoft), and an "original design", doesn't it?
Reply  |  Post Message  |  Messages List  |  Start a Board

Microsoft will know it's really arrived when its store becomes a regular destination for NYC tourists like the Apple store.
Reply  |  Post Message  |  Messages List  |  Start a Board
Page 1 / 2   >   >>
Editors' Choice
Hot Topics