Windows has long ruled the enterprise computing scene, but Apple is making headway -- not only with mobile devices, but also with Macs. According to a new survey of IT professionals, three out of five businesses support Apple computers. Moreover, nearly all respondents said they expect more Apple products to be used at work over the next three years. But Mac fans shouldn't get too excited; other factors suggest Windows still has a stranglehold on enterprise PCs.

Conducted in April of this year, the survey included 309 IT professionals. It was commissioned by JAMF Software, an Apple-focused IT management vendor, and conducted by Dimensional Data. The survey found that over 90% of businesses use Apple products, with 91% supporting iPhones, 89% supporting iPads and 60% supporting Macs. 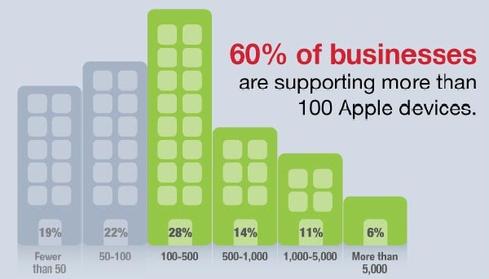 Clearly, iPad and iPhones are responsible for much of this growth. But the Mac figures are eye-catching too. It's well established that iPads and iPhones have become the mobile devices of choice for many businesses. Traditional computers are a different story; in the enterprise, Windows PCs have traditionally outnumbered Macs by more than ten to one.

So is JAMF's new data proof that Mac adoption is growing in the enterprise? Yes -- but with qualifications.

Apple's advocates, including CEO Tim Cook, often characterize iPhones as a gateway to the company's other products, including Macs. There's some truth to this. In the enterprise, the trend has manifested in BYOD programs. Once IT embraced employee preference by supporting iPhones and iPads, there was no going back, which led to support for more of employees' favorite devices, including Macs.

JAMF's report reinforces that employee preference drives Mac adoption; according to the survey, 78% of companies support Apple products for this reason, making preference far and away the most widely cited factor. "Higher productivity" was the second most commonly cited reason for using Apple products, marked by some 35% of respondents.

In an interview, Forrester analyst David Johnson agreed that BYOD programs have ushered more Macs into the enterprise, although not in overwhelming numbers. He said companies have become more interested in Type 2 hypervisors that allow companies to run Windows programs on Apple machines.

Still, Macs aren't invading the enterprise so much as making incremental progress. Data from Web-tracking firm Net Applications, for instance, shows that so far this year, OS X has actually lost market share. Windows XP's retirement might have been an opportunity for Macs to gain share, but most business users seem to have gone with Windows 7.

According to Forrester's most recent survey data, Apple remains a small player among enterprise desktop users, with only 2% of the field. MacBooks fare better, accounting for 6% of all laptops. These numbers put JAMF's findings into a larger perspective -- but they don't mean Apple's PCs aren't growing in popularity. Forrester found that 8% of employees want their next work device to be a Mac, indicating that though Windows remains the enterprise PC champ, Apple's influence is expanding.

Michael Endler joined InformationWeek as an associate editor in 2012. He previously worked in talent representation in the entertainment industry, as a freelance copywriter and photojournalist, and as a teacher. Michael earned a BA in English from Stanford University in 2005 ... View Full Bio
We welcome your comments on this topic on our social media channels, or [contact us directly] with questions about the site.
Comment  |
Email This  |
Print  |
RSS
More Insights
Webcasts
Building Asset Management into Your Enterprise Security Strategy
SASE: The Right Framework for Today's Distributed Enterprises
More Webcasts
White Papers
WhiteHat Professional Services Package
Cybersecurity Report Card
More White Papers
Reports
The State of Endpoint Security
2021 Top Enterprise IT Trends - Network Computing
More Reports

It is true that iPhones ara a gateway to other Apple products and that the the trend of BYOD programs has allowed employees to bring more iPhones and iPads to the work environment.

However, adding Macs to the picture is only logical due to how Apples devices synchronize making so many things so much easier. Not to mention the increase of productivity when working on a Mac, which, for many, has no comparison.

"It's certainly true that you can by a minimally configured PC for less than most Macs, but when I was looking at machines last year I found that, when I configured systems to equivalent hardware specs, Macs and Windows 8 machine were within $50 of one another."

I am a firm believer that most people just keep on repeating "Macs are more expensive" without really stopping to make a real analysis of the products. Many times the parroting is without knowledge of how it really is to work with a Mac, or the features than only Macs have and are invaluable for some users.

In my experience, at the end of the day you are more satisfied with how productive you are with a Mac. Some things are priceless.

I agree with Thomas. A friend of mine recently switched from PC to Mac and the first thing he noticed was he was more productive, could accomplished more in a day on a Mac than what he ever could on a day on a PC.

Long gone are the days when Macs were considered only a decorative device with great design but not good for the enterprise. Macs in the enterprise win in productivity and efficiency.

@Michael, another point of comparison might be interesting (and it's one I haven't done in a long time): Residual value at the end of a three-year equipment lease.

In the 1990s, that figure was why IBM and Dell ruled the enterprise desktop market -- each had at least small residual value at the end of a three-year equipment lease, and the value could be realized when doing a hardware refresh under a new lease. Other vendors had zero residual value. I wonder whether Macs have residual value on leases. The answer could explain at least a part of the enterprise acceptance level.
Reply  |  Post Message  |  Messages List  |  Start a Board

@Michelle, I compared both laptops and "all in one" desktop units and found the price comparison to hold across both platforms.

What's really interested is what I found when I compared what I bought last year (a full-up MacBook Pro Retina) with the machines I was buying a decade ago. I got dramatically more power in every dimension for roughly half the price I once thought was very reasonable. There are certain aspects of this industry that, as a consumer, you just have to love!
Reply  |  Post Message  |  Messages List  |  Start a Board


Good point. The entry point for Windows is much lower, but when you look at Windows machines that are specced comparably to an iMac or MacBook Pro, the Apple computers don't seem as pricey. It would be more accurate to say that Windows is more accessible in terms of price, perhaps, not necessarily that Apple is more expensive in absolute terms. Plus, if you look beyond specs (e.g. actual performance, longevity of device and amortization of investment, etc.), there are other ways to define value, many of which favor Mac.
Reply  |  Post Message  |  Messages List  |  Start a Board

Michael, one of the things you mention is a common piece of wisdom: "Macs are more expensive." It's certainly true that you can by a minimally configured PC for less than most Macs, but when I was looking at machines last year I found that, when I configured systems to equivalent hardware specs, Macs and Windows 8 machine were within $50 of one another.

Others' mileage may vary, of course, but my experience with this particular piece of the puzzle tells me that it might be overblown.
Reply  |  Post Message  |  Messages List  |  Start a Board

In terms of software titles, I think the Mac's advantage is pretty small, and confined to specific industries. A lot of media professionals prefer Mac, but I'm not sure it has much to do with Final Cut these days; it seems a lot of people still use Macs but have moved over to Adobe. Certainly, the number of companies who need OS X-exclusive software is dwarfed by the number of companies who need Windows software. That said, within those companies, not all employees are equally tethered to Windows, and among those who aren't, many might prefer a Mac.

I think there's something to Apple's software-hardware fusion. Maybe my experience isn't representative, but I've had lesser-specced Macs that outperformed newer, faster Windows machines. Whether you prefer OS X or Windows is more subjective and more dependent on the kind of work you do. But for knowledge workers and multi-taskers, some OS X features – such as Spaces – could make people more productive.

All that said, Macs are expensive. Based on the JAMF survey and a similar survey Parallels recent released, Macs also seem to be a management headache for a number of IT pros (though FWIW, when JAMF or Parallels points out that sort of data point, it's arguably intrinsically self-serving, since it points out a need for their products). Still, Tim Cook has been more ostentatious about enterprise-oriented features than Steve Jobs ever was, so maybe Apple will help to mitigate some of these headaches. Microsoft is starting to do its part, since its mobility suite can manage iOS devices in addition to Windows ones.
Reply  |  Post Message  |  Messages List  |  Start a Board

Often that preference for Macs is born out of a desire to be more productive. If people are more productive with an operating system that makes them more comfortable, it's not just a preference but a decision that improves productivity. When I can problem solve an IT issue due to OS affinity, that's a support desk savings.

Also, Apple's software model has real advantages to businesses. An employer that buys an employee a Mac will provide that employee with access to all Mac App Store software registered under that employee's personal Apple ID while at work. In some cases, the device may pay for itself in software the business didn't have to license.
Reply  |  Post Message  |  Messages List  |  Start a Board

It would be interesting to know how many of the employees getting Macs get them out of a real need, related to the work they do and things Macs do better. I suspect some of this is just employers indulging valued employees who have a strong Mac preference. In which case, it's good news that more companies are doing well enough to carve out money to pay the Mac premium.
Reply  |  Post Message  |  Messages List  |  Start a Board
InformationWeek Is Getting an Upgrade!