The Lenovo Yoga 900 notebook and the Home 900 AIO run Windows 10. Their adjustable screens and improved battery life put an emphasis on portability and flexibility.

Lenovo took the wraps off two devices, the Yoga 900 convertible notebook and the Home 900 portable All-in-One (AIO), which both run Microsoft's Windows 10 operating system. The computer maker announced the two PCs on Oct. 19.

The slim and lightweight Yoga 900 convertible is available with up to Intel's latest 6th generation Core i7 processor. It boasts four usage modes: laptop, stand, tent, and tablet.

An improved watchband hinge, composed of more than 800 intricately woven individual pieces, allows for improved rotation of the screen and keyboard for flipping and folding.

The Yoga 900 notebook, which is available this month, also makes use of Microsoft's Continuum feature on Windows 10, which allows users to move more seamlessly between laptop and tablet modes.

Other enhancements include 50% greater battery density compared to the previous generation, which Lenovo claims allows the device to achieve up to nine hours of local video playback. 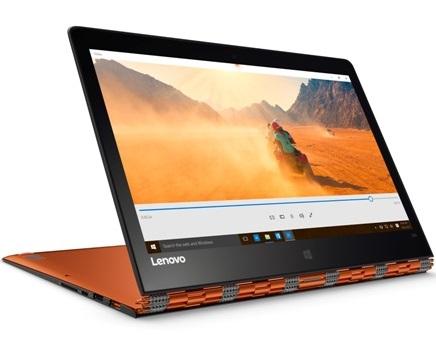 The latest Yoga notebook is less prone to overheating and is quieter and cleaner than before, thanks to its improved thermal cooling solution and redesigned vent structure.

A Samsung solid state drive (SSD) and greater memory capacity (up to 16GB) round out the Yoga 900, which starts at $1,199.99. It comes in a variety of colors, including clementine orange, platinum silver, and champagne gold.

The Yoga Home 900 AIO, which starts at $1,549, is designed with portability in mind. The machine can support up to an Intel 5th generation Core i7 processor. It has optional Nvida GeForce 940A graphics, and gives three hours of battery life.

The improved AURA 3.0 interface comes with enhanced facial recognition and editing for photos, and hundreds of new apps accessed through the AURA store, which is now linked to the Windows Store.

The PC also comes bundled with a curated set of apps from the Windows Store. These apps are designed to complement the touch capabilities of the Home 900's 27-inch screen, which can be laid flat on a table.

The announcement comes on the heels of rival Acer's launch of the R 14 notebook and Aspire Z3-700 AIO, which offer features to help maximize Windows 10 applications.

[Read about the improvements Microsoft should make.]

The Aspire Z3-700 is powered by Intel Pentium or Celeron processors, up to 8GB of DDR3L system memory, and SSD or hard disk drive storage options.

All these PCs are hitting the market at a time when the worldwide outlook for computers continues to slip.

Lenovo maintained its position as the world's top PC company with a 20% marketshare, a position the company has held for 10 consecutive quarters.

Nathan Eddy is a freelance writer for InformationWeek. He has written for Popular Mechanics, Sales & Marketing Management Magazine, FierceMarkets, and CRN, among others. In 2012 he made his first documentary film, The Absent Column. He currently lives in Berlin. View Full Bio
We welcome your comments on this topic on our social media channels, or [contact us directly] with questions about the site.
Comment  |
Email This  |
Print  |
RSS
More Insights
Webcasts
Key technology trends in 2021 - Making these technologies work for your business
Nip Ransomware in the FUD: Detecting Attacks Pre-Encryption
More Webcasts
White Papers
Sunburst: Impact and Timeline
Prevent vs. Pay: A Better Ransomware Plan
More White Papers
Reports
Assessing Cybersecurity Risk in Todays Enterprises
DNS Network Traffic Volumes During the 2020 Pandemic
More Reports