Intel execs at IDF promoted ultra-thin tablets, showed off depth-sensing cameras -- and repeated the mantra that PCs aren't dead yet.

It's appropriate the two events squared off for media attention. Intel has spent the past year attempting to get more tablet makers to use its chips instead of processor designs licensed from rival ARM. It's also attempted to revitalize the flagging PC market, its traditional bread and butter. Apple, meanwhile, is one of the culprits most responsible for Intel's challenges, given that iPads not only helped popularize ARM chips but also ate into PC sales.

Up against Apple's rabid fan base, Intel was never going to win Tuesday's battle for news buzz. Even so, Krzanich and his colleagues scored several points with flashy product demos and new tech announcements.

The CEO reminded IDF attendees of his company's goal to put Intel processors in 40 million tablets this year. "We are well on target and in some cases ahead of schedule," he said. 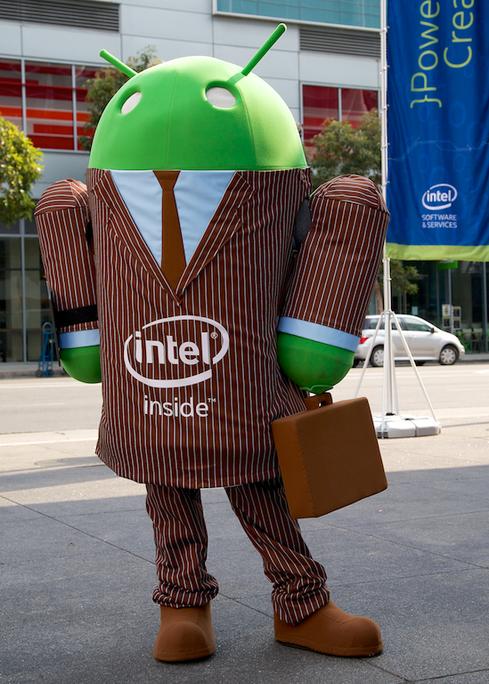 But Krzanich downplayed numbers, adding that innovation and improved user experiences are more important than sales targets. Of the various computers and tablets demoed during the keynote, few illustrated this idea as vividly as Dell's Venue 8 7000 tablet, which was announced during the keynote.

Dell CEO Michael Dell joined Krzanich on stage to show off the device, billed as the world's thinnest tablet. The 8.4-inch Android slate uses a quad-core Intel Atom processor and is only 6 mm thick -- even slimmer than the remarkably thin iPhones announced around the same time. The new Venue 8 boasts an impressive 2,560 x 1,600-pixel OLED display, weighs a slight 310 grams, and will be available in November. Dell didn't disclose pricing. 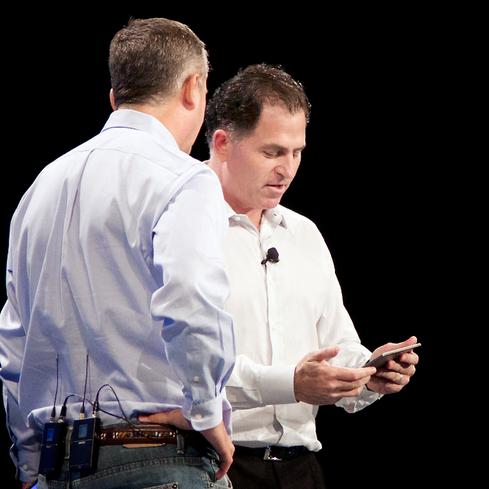 ARM is popular among Android OEMs, so the presence of an Intel processor in a device such as the new Venue speaks to the chipmaker's progress. Kirk Skaugen, GM of Intel's PC Client Group, said its silicon runs the top 2,000 Android apps as well or better than the newest Qualcomm ARM chips.

But for all the comparisons to ARM, the Venue's standout feature was its use of Intel's RealSense snapshot depth-sensing technology. Built from several sensors that measure spatial relationships among nearby objects, RealSense allows users to snap photos that "capture all the data around depth," Krzanich said.

[Take a look at the chips powering a new breed of ultra-thin 2-in-1s. Dell Business Laptops: Intel Broadwell Inside.]

This capability opens a range of possibilities. Using the Venue tablet, Krzanich showed how elements in a RealSense photo, such as a single object, can be isolated and edited. Augmented reality offers other potential applications. Skype calls might be made more interactive, for example, and objects snapped by RealSense cameras might be translated into files for 3D printers. Krzanich showed an app that lets users see how a new sofa might fit into a room; users need only point the RealSense camera at possible locations, triggering the camera's software to place a perfectly scaled representation of the couch on the screen. 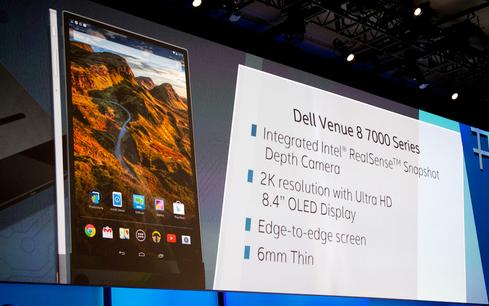 Dell and Intel bill the Venue 8 7000 as the world's thinnest tablet,
at only 6 mm thick.

Krzanich called the device an example of "two teams coming together, building something beyond what either could build themselves" -- one of several instances in which he stressed the importance of Intel's collaborations with OEMs, developers, and other partners.

I keep hoping Intel is right and they will get a toehold in the tablet market. I was at IDF yesterday and hoping to hear more about this, esp. tablets running Android on x86. However, as far as I can tell, most of the so-called tablets running on Intel CPUs are really slates -- that is, PCs running in a tablet form factor. That's a market segment that has been around for a long time and never gotten traction (cf. Surface). Until Intel gets into the tablet market with a popular entree, I think most its dialog on this is wishful thinking, rather than an reality.
Reply  |  Post Message  |  Messages List  |  Start a Board

Andrew, what do you think is missing from the ultra-thin device Dell showed at IDF?
Reply  |  Post Message  |  Messages List  |  Start a Board

Not sure anything is missing, but it has no adoption.
Reply  |  Post Message  |  Messages List  |  Start a Board
InformationWeek Is Getting an Upgrade!

Transformation, Disruption, and Gender Diversity in Tech Joao-Pierre S. Ruth, Senior Writer,  5/6/2021
White Papers
Are We Cyber-Resilient? The Key Question Every Organization Must Answer
Tech Insights: SASE's Pandemic Boost Likely to Stick
Improve your business with a Virtual CISO
The InformationWeek 2021 State of ITOps and SecOps Report
Run and Transform