IBM, originally one of the most proprietary of companies, is taking a page from the Open Compute Project's book and making its latest Power8 chip designs, and the specs for the new Power8 server motherboard, available to both collaborators and competitors.

Under this OpenPower ecosystem, any partner or competitor may negotiate a license with IBM and take Power8 designs to a chip fabricator to produce CPUs for its own products. They may likewise take Power chips and use them in their own servers and products, said Steve Sibley, IBM's director of Power Systems, in an interview.

IBM plans to announce both moves at an Innovation Summit in San Francisco Wednesday, in part because support for OpenPower has come from some large West Coast partners. Google, an original member (along with Mellanox, Nvidia, and Tyan) of the OpenPower Foundation organized last August, has expressed interest in using IBM Power8 servers. Google hasn't specified whether it's looking to Power8 for big-data processing servers or general purpose, search engine, and cloud computing servers.

Tyan, a custom hardware manufacturer with engineering centers in Taiwan, China, and the US, announced Wednesday it has produced a Power8 reference design for whitebox server production.

Power8 has been designed with some specific big-data handling characteristics. It is, for example, an eight-threaded processor, meaning each of 12 cores in a CPU will coordinate the processing of eight sets of instructions at a time -- a total of 96 processes, Sibley told us. By "processes," he means a set of related instructions making up a discrete process within a program. By designating sections of an application that can run as a process and coordinate the results, a chip can accomplish more work than a single-threaded chip.

Intel's Sandy Bridge E5 Xeon CPUs are double-threaded cores, with up to eight cores in a CPU, handling 16 processes at a time. The speed of execution is also important, and a small amount of coordination overhead is incurred as more threads are added. Nevertheless, the Power8 chip will attract interest among whitebox manufacturers and users of large numbers of servers processing big data, Sibley predicts. 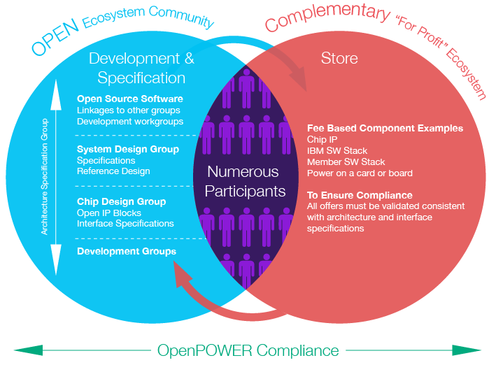 Like Sandy Bridge, IBM will manufacture Power8s by June with 22 nanometer circuits. It will run between 2.5 and 5 GHz. IBM estimates it will do two or three times the amount of processing work as the predecessor Power7 chip. In some cases, it will be able to analyze data "50 times faster than the latest x86-based systems," Sibley claims.

Such comparisons often pit one manufacturer's latest generation against a competitor's aging generation. Nevertheless, the Power8 has a clear lead in certain areas. It is built in 15 metal layers, using a silicon-on-insulator fabrication process. They contain 4.2 billion transistors, compared to the 1.16 billion to 2.27 billion on Sandy Bridge.

IBM would like OpenPower to be viewed as the equivalent of Facebook's Open Compute Project and Open Compute Foundation for the x86 architecture. How is it different? For one thing, I don't see major users, such as Fidelity Investments or Goldman Sachs, included.
Reply  |  Post Message  |  Messages List  |  Start a Board

Thanks to tresfou below for pointing out that what CAPI stands for was not spelled out correctly. It should be: Coherent Accelerator Processor Interface. The reporter is misreading his own shorthand.
Reply  |  Post Message  |  Messages List  |  Start a Board

Designing and building chips is an expensive proposition, so IBM needs to spread the invetment as broadly as it can. With Unix server sales declining and with Z systems encroaching a bit from above (with workload consolidation) and X86 moving up from below, Power is squeezed in the middle. IBM really had to look outside of its own universe for more Power-related revenue opportunities, even if it's not building the chips or servers.
Reply  |  Post Message  |  Messages List  |  Start a Board

To reduce this discussion to simplistic terms: Power costs more than x86, but for the space and power used, it delivers more per watt. This didn't use to matter as much as being able to get a new piece of hardware at low cost on which to run an application. And indeed IBM makes no mention of Power's efficient energy consumption in this announcement. But in the cloud, space and power consumed matter. IBM is bidding for a bigger future for its Power archiectecture. Google is standing alongside it, for what purpose, I don't know. But it could be more than just some specialized big data handling.
Reply  |  Post Message  |  Messages List  |  Start a Board
InformationWeek Is Getting an Upgrade!