IBM and HP slipped while Cisco and Lenovo gained share in the worldwide server market in 2014. That's the upshot of Gartner's fourth-quarter and full-year report on server shipments, revenues, and market share shifts in 2014, which was released Tuesday.

The shifts at two of these firms were fueled by IBM's late September sale of its x86 server business to Lenovo for $2.3 billion. That deal helped fuel Lenovo's 112.3% increase in unit shipments, though the company still doesn't rank among the top-five vendors overall (with $1.5 billion in revenue), since it doesn't participate in the lucrative, high-end RISC/Itanium server market.

Even without the sale of its x86 business, IBM's server revenue sank 14% from fourth quarter 2013 results, capping an off year for IBM's mainframe and Power server lines. IBM's server revenues across all categories were off 27.1%, while unit shipments declined 37.8% from 2013 full-year results. IBM's next-generation z13 server, released in January, is expected to revive mainframe revenues.

HP remains the server market leader, but it suffered a 9.4% decline in unit shipments for the year. Revenues held steady at $13.3 billion, up 0.4%. HP's biggest declines were in the RISC/Itanium market, with unit shipments off 18.8% and revenues down 21.8%.

Oracle posted the only positive number in the RISC (Unix and Linux) segment, with a 4.7% increase in unit shipments, but it, too, saw revenues decline, albeit with a 2.3-point gain in market share.

The biggest growth story of the year (not counting Lenovo's big acquisition) was Cisco's 29.8% increase in server revenue, to $2.9 billion. Driving that growth is Cisco's Unified Computing System (UCS) line, which integrates servers, storage, networking, and even virtualization software in preconfigured systems that are ready to run and to consolidate data center workloads. 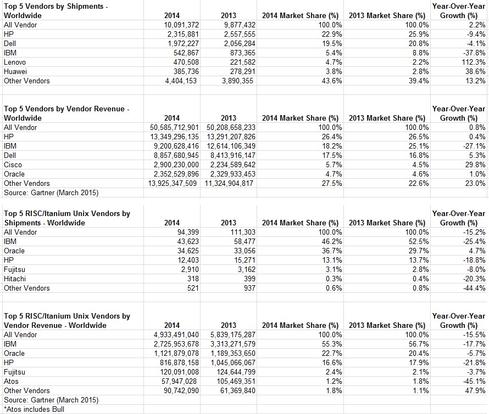 Cisco's success with UCS hasn't gone unnoticed, with Oracle recently introducing the Oracle Virtual Compute Appliance as a head-to-head UCS competitor. The appliance, which joins Oracle's line of Engineered Systems combining hardware and software, is one more example of an integrated system.

"The growth of integrated systems, while still relatively small as an overall percentage of the hardware infrastructure market, provided some growth contribution to the x86 server space for the year," wrote Jeffrey Hewitt, a research VP, in the Gartner report. Hewitt described 2014 as a "moderate growth year" with overall increases of 2.2% in shipments and 0.8% in revenue.

"x86 servers continue to be the predominant platform used for large-scale data center buildouts across the globe," Hewitt wrote.

Doug Henschen is Executive Editor of InformationWeek, where he covers the intersection of enterprise applications with information management, business intelligence, big data and analytics. He previously served as editor in chief of Intelligent Enterprise, editor in chief of ... View Full Bio
We welcome your comments on this topic on our social media channels, or [contact us directly] with questions about the site.
Comment  |
Email This  |
Print  |
RSS
More Insights
Webcasts
Detecting and Preventing Insider Data Leaks
Optimizing App Performance in the Cloud
More Webcasts
White Papers
Why Add Security to Your Skill Set and How to Do It
Supercharge Incident Response with DDI Visibility
More White Papers
Reports
Accelerate Threat Resolutions with DNS
Are Unprotected Cloud Databases Leaking Your Data?
More Reports

Garnter confirmed that it does tease out the server hardware cost vs. other hardware and the software cost component when compiling server shipment and revenue reports. I asked for more detail on integrated systems (like Cisco UCS and Oracle Engineered Systems). Gartner says these are a fast-growing component of the x86 market, but they're still less than 10% of the hardware market overall.
Reply  |  Post Message  |  Messages List  |  Start a Board

Regarding your question " I wonder how Gartner and others count the revenue for a "server" shipped as part of an integrated system", Gartner tracks Worldwide Integrated Infrastructure and Platforms separately and so I believe its not "double counting" between these two market shipment analysis.

Gartners latest Worldwide Integrated Infrastructure and Platforms report, which is still for 3rd Quarter of 2014, is here: http://www.idc.com/getdoc.jsp?containerId=prUS25347414

The "Overall" server market report is very misleading as it groups sales of all servers from $1 to $100M and so if all a vendor focusses on is the "higher" end of the market, the vendor may be low on the unit ranking but that clearly won't define the ranking of the revenue as you point out regarding Oracle.

For example.  Oracle has pretty much abandoned the "volume/commodity" x86 marketplace as seen by the trend in volume and revenue and while they still do sell certain x86 systems, they are much higher end configurations designed to go into Oracle's Engineered Systems like Exadata, Exalogic, Oracle Database Appliance, etc.

Regarding HP's RISC/UNIX/EPIC #'s, its evident that Itanium (and therefor HP-UX) is basically dying/dead fast as there hasn't been an Itanium update in over 3 years now and with HP's focus on x86, its clearly showing the massive decline in Unix/RISC/EPIC marketshare.

Same for IBM as they have sold off their x86 business, and whats left with Power is being focused more on Linux and third party OpenPower developers, and so IBM's "commoditization" of Power is clearly hurting their numbers.

One thing that you should point out is that a vendor can make all the revenue (and volume) in the world but if you can't make any profit(margin) from it, it's a dead business, cause you can't invest in R&D without profit. No R&D means no innovation which means you arent competitive.

Just look at the past 5+ years of server leaders in revenue/marketshare and how poorly the companies are doing today. Dell was #1 for many years and they had to go private. HP just announced yet another quarter of revenue losses and are splitting company in half this year and IBM, well they just announced 10th straight quarter of revenue losses. Look at the companies financial statements for profit margin and R&D investments and you'll see what really matters.
Reply  |  Post Message  |  Messages List  |  Start a Board

Cisco's UCS caught the virtualization wave and serves as a platform for consolidating servers in the data center. Virtualized UCS servers have strong network support. The virtual switch in the hypervisor offloads its switching tasks to a Ciasco hardware switch, speeding virtualization functions. Other vendors have converged infrastructure, but for timing on entering the server market, it's hard to critique Cisco's.
Reply  |  Post Message  |  Messages List  |  Start a Board

It's interesting to see who makes the top five in units shipped versus who makes the top five in revenue. Lenovo and Huawei get the box-mover awards, showing up as #4 and #5, respectively, in units shipped. Cisco and Oracle get the money-maker awards, showing up #4 and #5 in revenue, respectively, despite not being among the top five in units. I wonder how Gartner and others count the revenue for a "server" shipped as part of an integrated system. I'll make a point of asking Gartner about that before the next report.
Reply  |  Post Message  |  Messages List  |  Start a Board
Editors' Choice
Hot Topics