Dell CEO Michael Dell says that while competitors such as HP and IBM have devolved into chaos, Dell's newest storage, server, and networking products will help it keep an edge.

At its Dell World conference this week in Austin, Texas, Dell revealed a variety of storage and networking offerings, including new converged infrastructure offerings and new flash-based and hybrid storage products that make enterprise-class technology more affordable to small and midsize businesses.

With the products, Dell hopes to build on its recent hot streak. After taking the company private just over a year ago in one of the biggest leveraged buyouts in history, CEO Michael Dell has repeatedly said his company can move faster without Wall Street investors' quarterly pressure. Thanks to the buyout, Dell's financial records are no longer open to public perusal, but both research firms such as IDC and independent reports indicate the company has outpaced competitors' growth across a wide range of products.

At Dell World, CEO Dell frequently crowed about the research firms' findings while taking shots at rivals such as HP and IBM -- companies that, according to Dell, have grown too chaotic and disorganized to serve customer needs. With the new products, Dell says his company will accelerate its momentum.

[Data center hardware loyalty is dying, and cloud architecture is killing it. See Is 'New Style Of IT' Good For HP Customers?]

Dell's PowerEdge FX converged architecture leads the batch of new products. A converged infrastructure play, FX architecture combines compute, storage, and networking into a single product, complete with a unified management portal that lets IT admins wrangle all three components. The 2U enclosure features six PowerEdge server, storage, and network sleds, and can be configured with both Intel Xeon chips, for more power, or Intel Atom chips, for Web serving and other tasks that prioritize scale over computing muscle. The FX architecture also blends both rack and blade servers, promising customers a more flexible balance between density and ease of deployment. As a whole, the FX chassis offers businesses the ability to tailor infrastructure to particular workload needs, CEO Dell said at the conference. 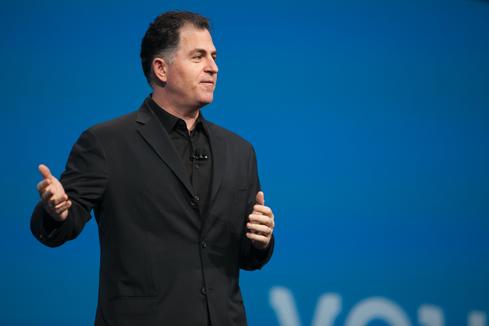 Other new products include a Dell Storage SC Series all-flash array that costs less than $25,000, a price that undercuts most other all-flash enterprise options. Dell says the entry-level product provides substantially better performance than the traditional hard drives with spinning discs that are more common in this customer range.

In a related vein, Dell also announced the Dell Storage PS4210 Series storage arrays, the first model in the entry-level PS Series to include hybrid storage, with both flash and traditional drives. The company also unveiled its Dell XC series of Web-scale converged appliances. Another converged infrastructure offering, the XC combines compute, storage, and hypervisor resources. Powered by software from Nutanix, XC appliances allow IT admins to manage virtual environments with extreme granularity.

In an interview, Travis Vigil, executive director of Dell storage, compared the XC series to the scale-out technologies that companies such as Amazon, Facebook, and Google use in their data centers. He said SC has been designed as an end-to-end product, with support for Wyse endpoints and reference architectures for VMware, Citrix, and other virtualization players. Customers will be able to choose from five configurations, each of which includes two Intel CPUs, two or four 400-GB or 800-GB SSDs, four or ten hard drives, and two Gigabit Ethernet ports.

Along with the aforementioned storage and networking products, Dell's other enterprise-oriented products announced this week include Dell Cloud Marketplace, which is designed to remove the complexity from multi-cloud deployments, and a new predictive analytics offering created in partnership with Microsoft.

PowerEdge FX products are slated to become available in December, though some architecture sleds won't be available until the first half of 2015. The SC4020 all-flash configuration will also be available early next year. Interested customers won't have to wait as long for the other new products. The XC appliances will begin shipping November 11 with support for VMware and Microsoft's Hyper-V. The Storage PS4210 arrays hit the market Wednesday.

Michael Endler joined InformationWeek as an associate editor in 2012. He previously worked in talent representation in the entertainment industry, as a freelance copywriter and photojournalist, and as a teacher. Michael earned a BA in English from Stanford University in 2005 ... View Full Bio
We welcome your comments on this topic on our social media channels, or [contact us directly] with questions about the site.
Comment  |
Email This  |
Print  |
RSS
More Insights
Webcasts
Managing a Hybrid Cloud Infrastructure
Advancing the Hybrid Cloud & App Modernization Journey with IBM
More Webcasts
White Papers
2020 SANS Enterprise Cloud Incident Response Survey
The Top 5 Mistakes Everyone is Making in Vulnerability Remediation
More White Papers
Reports
2021 Application Security Statistics Report Vol.2
Key Strategies for Managing New Risks in Cybersecurity
More Reports

Great question, Laurie. Generally, I think the mood was positive. I think a lot of customers appreciate that Dell wants to make the cloud more accessible and user-friendly but doesn't have a dog in the infrastructure and ecosystem fights in the same sense that some rival companies do. As Matthew elaborated in his post in this thread, many of Michael Dell's jabs at IBM and HP referenced this theme-- that Dell is interested in helping customers manage whatever services they happen to purchase from Microsoft, Amazon, Joyent, etc, whereas some others are interested in pushing people to one service or another. That said, I got the sense from some people at larger companies that many of the sessions that seemed interesting ended up being more SMB-focused than they'd like. But I think that's probably a case-by-case observations. I also got the sense that the smaller companies didn't see some of the big data ideas discussed as immediately applicable (i.e. next 1-2 years) to their businesses, for example. Most attendees seemed to like that Michael Dell seemed so confident, even smug at points. I talked to a few people who didn't have any negative comments, per se, but who felt the conference was only "okay"-- e.g. full of evolutionary advances, but not necessarily anything that blew their minds.

Ouch, Charlie, you have a good memory! Perhaps Dell plans to do more partnering with Micrsoft in the cloud? Dell also wants to get serious on software, but there's only so much you can do when you're not Microsoft, Oracle or IBM. Thus far Dell has been smart enough to partner with database and Hadoop vendors rather than try to be a data-platform player. Maybe they've reached the same conclusion on the need for yet another cloud?

Do you think HP's Helion has a unique and viable long-term play up against the likes of Amazon, Microsoft, IBM and a bunch of focused best-of-breed cloud providers?
Reply  |  Post Message  |  Messages List  |  Start a Board

HP and IBM have grown too chaotic and disorganized to serve customers needs? If I were a Dell executive, I would hope HP and IBM don't point out Steve Shuckenbrock's announcement of Dell's entry into public cloud computing on April 7, 2011, It planned 12 hyperscale data centers around the world, later announcing one was ready in the U.S. and one in the U.K. After the first 2, it then backed out of the cloud. Perhaps it did so in a highly organized, non-chaotic way.
Reply  |  Post Message  |  Messages List  |  Start a Board

Michael, can you give us a sense of the mood of attendees this year? Were they excited about the move back to a private model for Dell? Where does the company have convincing to do?
Reply  |  Post Message  |  Messages List  |  Start a Board
Editors' Choice
Hot Topics