Dell bolsters its workstation comeback with new tower and rack systems that are among the first to feature fast DDR4 RAM.

Tablets have encroached on the PC's turf over the last few years -- but there's at least one market for which the relatively puny power of an iPad or even a Surface just won't suffice: workstations. Whether you're rendering special effects for a Hollywood movie or running CAD programs for an engineering firm, if you need all the power you can get, Dell hopes its new products fit the bill. On Tuesday, the company refreshed its workstation lineup, announcing new products in both tower and rack configurations.

On the tower side, Dell introduced three new models: the Precision Tower 5810, which offers a single socket configuration; the 7810, which ups the ante with a dual-processor setup; and the 7910, which is top-of-the-line among the new offerings. The 7910 boasts a redesigned chassis that offers tool-free adjustments, an externally accessible power supply, and a lockable front bezel that Dell claims will not only add security, but also run up to 49% quieter than a previous-generation T7610 workstation.

[How are Dell workstations contributing to Hollywood magic? Read IT Fit for Jurassic Park, Cosmos.]

All of the new systems support Intel's newest Xeon processors, which will make Dell among the first vendors to offer faster DDR4 RAM. Customers will eventually be able to choose up to 1 TB of memory, but at launch, the systems will be available with only up to 512 GB. The new workstations also support the latest professional graphics options from NVIDIA and AMD, lightning-fast PCIe SSD drives, and Thunderbolt 2 ports, which drive data transfer speeds of up to 20 GB/s. 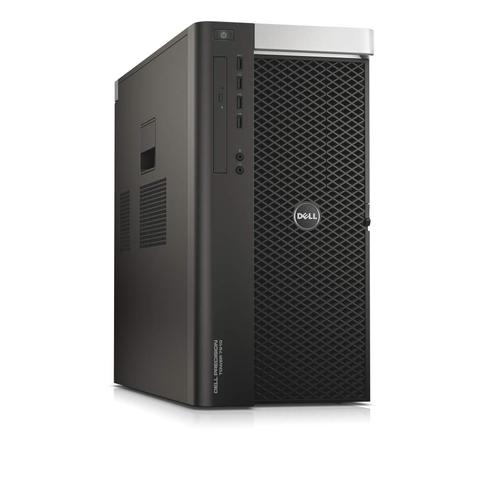 On the server side, Dell, which research firm IDC recently ranked as the top rack workstation vendor worldwide, announced the Precision Rack 7910. It offers the power of the Tower 7910, but in a 2U rack form factor. It supports workstation virtualization with Citrix XenServer and WMware ESX hypervisors.  The Rack 7910 also includes Dell's Integrated Dell Access Controller (iDRAC), which is designed to enable IT admins to remotely manage datacenter assets.

Dell's new systems also feature version 2 of Dell's Precision Optimizer (DPO). Dell advertises DPO, which will be available for download next month and as a factory-installed offering by mid-October, as a way to squeeze better performance out of certified apps. DPO version 2 includes new performance profiles for Autodesk 3ds Max and Inventor, which add to existing profiles for other high-end applications, including PhotoShop, After Effects, and Maya.

Though tablets can't replace workstations, the market for high-end performance-oriented systems has suffered in recent years thanks to the global recession, shifting IT hardware budgets that have recently prioritized mobile devices, and upgrades to Windows XP-based PCs. But workstations have rebounded in recent months.

IDC said in June that after two years of negative growth, workstations were poised to make gains in Europe, a region hit particularly hard by recent macroeconomic slowdowns. IDC analyst Mohammed Hefny noted at the time that several industries that use workstations, such as construction and automotive companies, had begun to recover from recent economic instability. Such sectors, he said, "will be sources of workstation infrastructure investments."

Jon Peddie Research (JPR) came to similar conclusions. Earlier this summer, analyst Alex Herrera said workstation vendors were "cautious and tentative, but still headed in the right direction." JPR said that in the first quarter of this year, HP led the workstation market with 40% of shipments, followed by Dell with 33%. Lenovo was a distant third with 13%.

Peddie singled out Dell's performance during the quarter. After several years of decline, Dell has been on a slow but steady comeback, he wrote. "The first quarter continued to show modest but measurable improvement, as Dell hacked a full point of share out of HP's current lead in the market."

Michael Endler joined InformationWeek as an associate editor in 2012. He previously worked in talent representation in the entertainment industry, as a freelance copywriter and photojournalist, and as a teacher. Michael earned a BA in English from Stanford University in 2005 ... View Full Bio
We welcome your comments on this topic on our social media channels, or [contact us directly] with questions about the site.
Comment  |
Email This  |
Print  |
RSS
More Insights
Webcasts
Detecting and Preventing Insider Data Leaks
Optimizing App Performance in the Cloud
More Webcasts
White Papers
Why Add Security to Your Skill Set and How to Do It
Sunburst: Impact and Timeline
More White Papers
Reports
The State of DevSecOps Report
Special Report: Edge Computing: An IT Platform for the New Enterprise
More Reports

Dell hasn't announced pricing, but the previous-gen T7610 starts and tops out a bit lower than the Mac Pro. But that's not entirely an Apples-to-Apples (no pun intended) comparison; the Mac Pro tops out with a 12-core processor, whereas the T7610 maxes out with a 10-core chip. The Mac's chip is also clocked higher.


But the new 7910 could be different. DDR4 RAM is faster than the DDR3 version in the Mac Pro, and the Dell can hold a lot more memory. It's not clear if Dell intends to charge a premium until DDR4 is more widely available. But in any case, Apple would need to update to newer Xeon chips, I believe, to offer something like that. Given that the Mac Pro hasn't been at full production capacity until relatively recently, it's hard to know how quickly Apple might bump specs. It's been moving all of its other Macs to the newest Haswell generation, but in those devices, even the pricey MacBook Pros, cater to a bigger audience and are updated more regularly than the Mac Pro.
Reply  |  Post Message  |  Messages List  |  Start a Board

Any idea how these compare to Apple's Mac Pro, in terms of performance or price?
Reply  |  Post Message  |  Messages List  |  Start a Board
Editors' Choice
Hot Topics