Anyone who wants to get their hands on an Apple Thunderbolt Display has until stock runs out. The company has decided to discontinue the monitor. Does this mean a 4K or a 5K display is on the way?

Apple has decided to discontinue its 27-inch monitor with the Thunderbolt display, which can be used to connect to the company's MacBook notebooks or other Mac computers to provide more screen room.

The company's unannounced decision was confirmed by the technology blog TechCrunch on June 23, which received a statement from Apple confirming the discontinuation of the monitor.

"We're discontinuing the Apple Thunderbolt Display," a company spokesperson told the blog in a statement. "It will be available through Apple.com, Apple's retail stores and Apple Authorized Resellers while supplies last. There are a number of great third-party options available for Mac users." 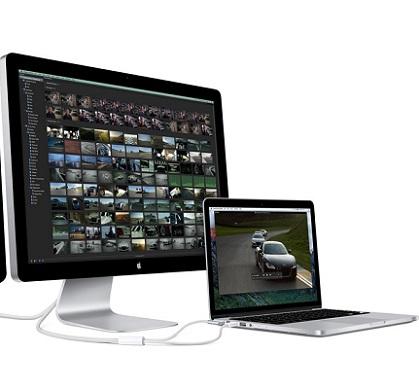 With built-in Thunderbolt technology, which Apple boasts is "the fastest, most flexible I/O ever," the display can connect to any Thunderbolt-enabled Mac. The technology delivers 10 gigabits per second of transfer speeds in both directions.

The Thunderbolt port allows users to connect to new Thunderbolt-compatible peripherals, as well as existing USB and FireWire peripherals using simple adapters, and can daisy chain up to six high-speed devices without using a hub.

Rumors about the possible discontinuation of the display, which was already somewhat outshone by the resolution of Retina MacBooks and iMacs, started surfacing at the beginning of the month.

The decision confirmed by Apple this week led to a flurry of speculation on the web that Apple is working on a 4K or even a 5K version of the display that could launch later this year. Many have been long hoping that Apple would release a 4K Thunderbolt display.

According to a June 1 report from Apple-centric blog 9to5Mac, Apple may be planning to integrate a GPU directly into its next-generation display.

[Read the early reviews of the new MacOS Sierra.]

"Our sources explain that the reason for it is primarily for compatibility with as many future Macs as possible," the article stated, quoting unnamed sources. "Due to the immense graphics needs required to push 5K worth of pixels, normal super high-resolution displays require connected computers to include significantly powerful GPUs."

There has been some speculation that Apple will release a 4K display around the same time that it unveils its latest MacBook Pro, which is due for a refresh sometime this year.

Apple's latest MacBook Pro notebooks will come with an OLED screen display touch bar above the keyboard, as well as Touch ID support, and take some styling cues from the ultrathin 12-inch MacBook.

The report comes from a research note written by Apple analyst Ming-Chi Kuo at KGI Securities. It was corroborated by sources contacted by 9to5Mac.

Kuo's note also predicted Apple would make the MacBook Air its entry-level model, and debut a MacBook model in a 13-inch variant, which would serve as the middle-tier option for consumers.

Nathan Eddy is a freelance writer for InformationWeek. He has written for Popular Mechanics, Sales & Marketing Management Magazine, FierceMarkets, and CRN, among others. In 2012 he made his first documentary film, The Absent Column. He currently lives in Berlin. View Full Bio
We welcome your comments on this topic on our social media channels, or [contact us directly] with questions about the site.
Comment  |
Email This  |
Print  |
RSS
More Insights
Webcasts
Building Asset Management into Your Enterprise Security Strategy
SASE: The Right Framework for Today's Distributed Enterprises
More Webcasts
White Papers
IDC Market Share: How the Network Is Used to Unmask the Adversary
Zero Trust Evaluation Guide
More White Papers
Reports
2021 Application Security Statistics Report Vol.2
The Need for Speed: Second Generation EDR
More Reports