The infrastructure for the new digital enterprise rests on five domains. At the Gartner Symposium ITxpo 2016, Peter Sondergaard and his colleagues explained the importance of those domains.

The increasing pace of digital is changing civilization as we know it, according Peter Sondergaard, senior vice president of Gartner Research, who spoke on Oct. 17 from the middle of a harsh spotlight on a darkened stage at the Gartner Symposium ITxpo 2016 in Orlando, Florida. "Safety is at stake. The digital world around us is in a permanent state of upgrade," he warned. 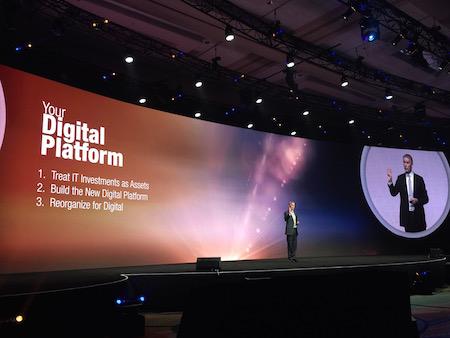 CIOs are building an infrastructure for an increasingly digital business, Sondergaard said, noting that Gartner is estimating that within three years more than half the value of most company's products will arise from their digital content.

That digital content will be built on a digital platform and an infrastructure that is critical because, according to Sondergaard, "When you build it, it will bring the capability to reach customers and things more intelligently."

Sondergaard told the audience that the platform for the digital business is built on five domains:

Traditional core IT systems remain important to the organization, because the business must continue to operate while the digital transformation takes place. This traditional IT is Mode 1 in Gartner's Bimodal IT model, with Mode 2 as the dynamic, transformative digitalization mode.

LeHong said, "You don't need two organizations for bimodal. Bimodal must bring together both modes seamlessly." He explained that success comes from seamless integration of the two IT modes. "You need a single organization with clear leadership."

Plummer explained the contributions of the two modes to an IT whole in straightforward terms. "Mode 1 is experienced hands," he said. "Mode 2 is beginner's mind." Both Plummer and LeHong warned executives against creating two separate internal organizations, each dedicated to a single mode.

It's critical to have diversity on IT teams, especially cognitive diversity, they said. It can be difficult to manage such a team, they pointed out, but it's the sort of team that will produce the solutions that are needed in a rapidly evolving organization.

[Not everyone agrees that bimodal IT is the best path. Read How Bimodal IT Can Kill Your Company.]

Customer experience is the next domain, and it extends far beyond what many CIOs see as the traditional realm of user interface. Sondergaard described an "experience economy" in which "...you earn customer loyalty in moments." Those moments might not involve an encounter where the customer realizes that there is an encounter with a computer.

"Adding devices to the IoT is the easy part. Adding business processes and analysis is much more difficult." 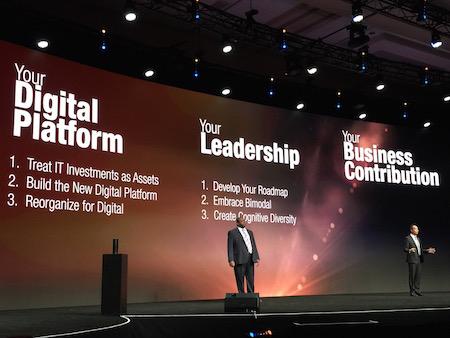 As Sondergaard spoke of business intelligence, he was careful to be rather specific about his meaning. "You have to start with traditional data science, but data isn't where the action is," he said. "Algorithms determine the action." That action will be in the direction of one of the most frightening phrases in business IT: artificial intelligence.

Within this new definition of machine learning and artificial intelligence, information is the new code base. He described an IT department with an entire layer of employees charged with training the system that executives will then trust to make some of the most critical decisions needed in the enterprise.

Part of the new decision-making will deal with other organizations, and all the organizations together will make up the enterprise ecosystem. "We build the capability to interact with customers, partners, adjacent systems, and even the competition," he said. "Networked digital ecosystem businesses are next."

"We will build electronic touchpoints. In technical terms these are APIs," he said, and then explained why this is so. "An active developer community can create more products in a week than you can create in a year."

"Ecosystems are the future of digital," Sondergaard added. He explained that digital transformation on the scale he described can't help but transform the entire organization, the organization's larger ecosystem, and society as a whole.

It's a far-reaching vision that will likely be here sooner than we expect. "Technology that approached gradually, arrived suddenly," he said. Gartner sees no sign that the accelerating rate of change is going to slow down.

Curtis Franklin Jr. is Senior Editor at Dark Reading. In this role he focuses on product and technology coverage for the publication. In addition he works on audio and video programming for Dark Reading and contributes to activities at Interop ITX, Black Hat, INsecurity, and ... View Full Bio
We welcome your comments on this topic on our social media channels, or [contact us directly] with questions about the site.
Comment  |
Email This  |
Print  |
RSS
More Insights
Webcasts
Hybrid Cloud: The Great Balancing Act
Nip Ransomware in the FUD: Detecting Attacks Pre-Encryption
More Webcasts
White Papers
Why Add Security to Your Skill Set and How to Do It
New Cybersecurity Paradigm
More White Papers
Reports
Are Unprotected Cloud Databases Leaking Your Data?
How IT Security Organizations are Attacking the Cybersecurity Problem
More Reports

11 Ways DevOps Is Evolving Lisa Morgan, Freelance Writer,  2/18/2021
White Papers
Why Add Security to Your Skill Set and How to Do It
How Secure Are Your Endpoints?
10 Must-Have Capabilities for Stopping Malicious Automation Checklist
Don't Let the Past Obstruct Your Zero-Trust Future
5G-Enabled Edges of Tomorrow Require Converged Network and Security