IBM has long pitched systems that configure, manage, and heal themselves, but its new PureSystems integrated hardware and software offerings update that strategy for the cloud model.

IBM for years has pitched systems that "autonomically" configure, manage, and heal themselves, but the company is now updating the technologies and concepts behind that message for the cloud age. On Wednesday it unveiled the first two in what will be a series of integrated hardware and software offerings, sold under a new brand called PureSystems, designed to deliver the benefits of cloud-style computing without the cost and complexities of building such architectures from scratch.

The first products in the PureSystems line, the result of a three-year, $2 billion research investment, are the IBM PureFlex and IBM PureApplication systems. The former can be thought of as a private Infrastructure as a Service (IaaS) platform, while the latter is more like a Software as a Service (SaaS) vehicle that comes optimized and preconfigured for any of more than 100 enterprise apps.

Both systems employ a range of IBM and third-party virtualization, automation, scaling, and on-demand technologies to deliver a cloud-like experience within the confines of an enterprise datacenter. 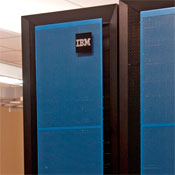 Cloud In A Cabinet

"These are unique in the industry; they address a couple of challenges we’ve been wrestling with for some time," said Rod Adkins, IBM’s senior VP for Systems & Technology, in an interview. "One is that we're simplifying the data center through integration by design. The second is that we’re making IT more consumable. We've built in more expertise and we’ve simplified the experience."

As an example of what buyers get for their six-figure investments, the Standard version’s cabinet includes an IBM management node, 10GB network switch, IBM Storwize V7000 storage, and 2 x 8 GB Fiber Channel switching. In terms of server chassis options, IBM said the system will support multiple operating system and processor pairings, from Windows on x86 to AIX on Power. The PureFlex system also supports multiple, third-party hypervisors for virtualization.

To achieve app integration, IBM has worked closely with more than 100 ISVs to optimize their software for the PureApplication platform. One such ISV is EcoLogic Analytics, a Bloomington, Minn.-based developer of Meter Data Management Systems for major utilities like Pacific Gas & Electric and Austin Energy.