Helsel, a former NASA programmer, is a veteran of the network security space. His latest company has ventured into the emerging, unproven frontier of keeping malware-infected computers from connecting into corporate networks. 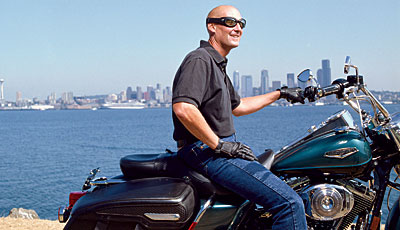 COMING CLEAN
Network-access control, or NAC, is in the early part of its adoption curve. "It's critical to understand who your users are and if their systems are clean." Many companies have security policies to do this, but they need a way to apply those policies to devices trying to connect to their networks.

BE PERSISTENT
Admission control will remain a valuable security technology, but it's only part of NAC. Companies also need to check those clients admitted to their networks on an ongoing basis. "You can guarantee something will change in the network daily, and you need to be able to react dynamically."

BARREL BLUES
Helsel entered college with the notion of becoming an exploration geophysicist to search the oceans for oil fields. When he was a junior, oil sold for $37 a barrel. By the time he was ready to graduate, oil was down to $10 a barrel, and jobs in the field dried up. "So I took computer programming courses."

ROCKET SCIENCE
Programming took Helsel to NASA, where he helped write the operating system that launched the space shuttle. Your work life should be as exciting and interesting as you can make it, he says. "If you don't mind being stopped at a red light on your way to work, it's time to find a new job."

EASY RIDER
The 46-year-old Helsel rides a 2002 Harley-Davidson Road King Classic. A friend's wife once told him, "When you're in a car, you're trying to get there. When you're on a bike, you're already there." Right on.