To call it an app store is a little grandiose -- it's really just a listing of compatible apps and cloud services, with accompanying screenshots -- but Drchrono says it will vet the apps based on the quality of their technology and their fit with its own services. Philosophically, at least, the approach mirrors that of the app store for the iPhone and iPad, said Daniel Kivatinos, COO and cofounder of Drchrono. "I think what Apple did is brilliant. They said anyone can build apps for the iPhone, but we're going to review them."

Developers must fill out an API access request form, but "the API itself, we'll give to everybody," Kivatinos said. "It's more the access to push and pull data from doctor's accounts that we are careful about." Developers who want to explore the possibilities of the API will be given access to a sandbox environment where they can work with simulated patient records. 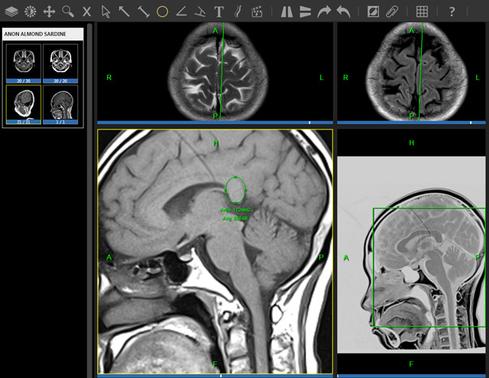 A medical image displayed in MedXT.

The first compatible apps Drchrono is promoting are:

The level of integration and the data accessible to each app varies, Kivatinos said. For BetterDoctor, it's mostly a matter of single sign-on, where users can register and sign in with their Drchrono account information and BetterDoctor can act as an appointment scheduling front end to Drchrono. MedXT can publish a PDF rendering of a medical image into an individual's patient record in Drchrono, while also allowing doctors to use their Drchrono credentials to log into its own app for a high-res version. There are already plans for a version 2 of that integration where Drchrono users would be able to use a more-sophisticated embedded viewer to access the images.

"Over time, it's going to get more and more interesting as we figure out how to get more integrations working within Drchrono," he said.

If Drchrono is to establish an active developer community, it still has some work to do. A Google group established for discussions of the API was set up years ago, and is so far populated mostly by developers lamenting the lack of activity there. Kivatinos said he and his cofounders have been thinking about APIs since the earliest days of the company, but for a long time that interest was premature because they didn't have enough users or a large enough business to attract a robust developer community. "So we thought, 'What are the other things that are really taking off these days?' and we saw the iPad. So we used the API to build the iPad app, the iPhone app, and the Android app."

Drchrono recently announced a partnership with Box for file sharing, but in that case the integration was built around the Box APIs. "This is sort of the other way around," Kivatinos said, where Drchrono has gotten big enough to attract other healthcare app vendors that want to reach its customers or gain access to some of its functionality.

In some cases, there is overlap. Drchrono includes its own appointment scheduling, for example, but realizes it can't necessarily be the best at everything, and for BetterDoctor, "that's their whole business," Kivatinos said. "We do some things really well, particularly mobile EHR and billing."

Drchrono was also approached recently by another company that is doing medical EHR and billing but was concerned that it would lose customers in 2014 for lack of an EHR certified to meet the federal government's Meaningful Use Stage 2 requirements, Kivatinos said. There, the integration will be to expose just the EHR components of Drchrono through the API so they can be exposed through the other company's app -- while that firm would continue to use its own billing software, rather than the Drchrono version. "They're going to do it so there's no change to the doctor's workflow, and you don't have to dual enter anything," he said.

Kivatinos said he didn't want to name the firm without permission, but mentioned it as an example of how he plans to work "even with firms that might look like competitors."

David F. Carr is editor of Information Healthcare and a contributor on social business, as well as the author of Social Collaboration For Dummies. Follow him on [email protected] or Google+.

Which comes first, the public facing API or the active developer community? In this case, the developer community needed to be sparked first. A lucky company will build a well designed, well documented API and they will come. But not everyone can be Apple.
Reply  |  Post Message  |  Messages List  |  Start a Board

Drchrono has also been doing some interesting things with apps for patients. See:

10 IT Trends to Watch for in 2021 Cynthia Harvey, Freelance Journalist, InformationWeek,  12/22/2020
White Papers
Passwordless: The Future of Authentication
Two-Factor Evaluation Guide
Presenting Your Cloud Security Strategy to the Board
Cloud Connectivity -- Your Guide to the Network
Seven recommendations for a Successful SD-WAN Strategy