Amid calls for a federal investigation of Oregon's health insurance exchange -- the most dysfunctional state project of its kind -- Oracle reportedly is fighting to avoid taking the blame for the failed exchange by arguing that its software worked but wasn't allowed to go live for political reasons.

In documents provided to the US House Energy and Commerce Committee, Oracle claimed the website could have gone live in February "but that the state of Oregon pulled the plug on it for political reasons," reported TV station KATU, based on a PowerPoint presentation and other correspondence it obtained that was provided to the committee. InformationWeek has requested from the committee, but not yet received, copies of the same documents. An Oracle spokeswoman declined to make the materials available or to comment on its dispute with the state of Oregon.

[As bad as it seems? Read Government IT 'Fundamentally Flawed,' Researchers Say.]

The state is preparing to sue Oracle to recover money paid for a Cover Oregon health insurance exchange website that never opened to the public. The health insurance exchanges established under the Affordable Care Act were all supposed to go live on Oct. 1, 2014, and many -- from the federal Healthcare.gov website on down -- experienced problems at that time. Oregon delayed the launch of its website and just kept delaying it through the end of the open enrollment season in April of this year.

The state of Oregon released a portion of the website in February, but to insurance agents only. The stated reason was that the Oracle software was too unstable to be exposed to the general public. The Oracle documents tell a different story, KATU reports. 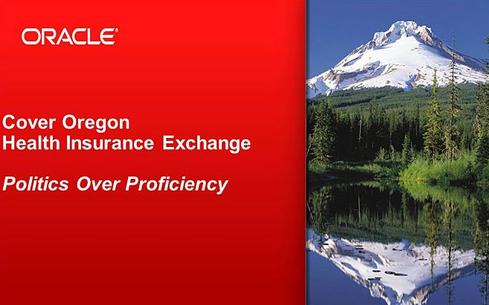 According to the KATU report, Oracle complains of unfair treatment by state leaders and Deloitte, the consulting firm hired to evaluate whether the Cover Oregon project could be salvaged at a reasonable cost. Deloitte concluded the website would cost $78 million to whip into shape, versus the estimated $5 million cost of scrapping the website and redirecting citizens to the federal HealthCare.gov site. The state opted to kill the website project and move to HealthCare.gov.

"Oracle can only conclude that the Governor's unwillingness to release the website is because doing so doesn't fit with his re-election strategy of blaming Oracle for his own mistakes," Oracle argued, according to KATU.

Furthermore, "Deloitte's analysis ignores the fact that the system is ready for release, and has been since February 2014," Oracle maintains, and "Deloitte's estimate to complete the existing exchange is grossly inflated and appears to be based, at least in part, on Deloitte's lack of experience with certain functional areas and their desire to replace those portions of the existing system with their own custom approach."

Several investigations of the project's collapse have blamed an excessive reliance on Oracle as one factor -- though there's plenty of blame to go around. The state elected to act as its own systems integrator rather than hire one, meaning Oracle never took on that role and responsibility, instead providing contract labor while others set priorities and schedules. Still, state officials charge that Oracle did shoddy work and missed deadlines.

The office of Oregon Gov. John Kitzhaber gave KALU a statement reiterating that he made the decision to pull the plug on the state exchange in consultation with Cover Oregon's management and governing board, based on "failures of the website to perform at minimal levels."

Deloitte was recruited to evaluate the project based on a relatively successful record of implementing health insurance exchanges for other states, including one for Connecticut that has become a model for other states like Maryland seeking to retool their own exchanges.

Has meeting regulatory requirements gone from high priority to the only priority for healthcare IT? Read Health IT Priorities: No Breathing Room, an InformationWeek Healthcare digital issue.

David F. Carr oversees InformationWeek's coverage of government and healthcare IT. He previously led coverage of social business and education technologies and continues to contribute in those areas. He is the editor of Social Collaboration for Dummies (Wiley, Oct. 2013) and ... View Full Bio
We welcome your comments on this topic on our social media channels, or [contact us directly] with questions about the site.
Comment  |
Email This  |
Print  |
RSS
More Insights
Webcasts
Key technology trends in 2021 - Making these technologies work for your business
Detecting and Preventing Insider Data Leaks
More Webcasts
White Papers
Why Add Security to Your Skill Set and How to Do It
Are We Cyber-Resilient? The Key Question Every Organization Must Answer
More White Papers
Reports
The State of Threat Detection and Response
DNS Network Traffic Volumes During the 2020 Pandemic
More Reports

Both sides failed here, and basically their theory does sound crazy. It would be interesting to hear what the other side has to say. Few things make sense at this point.
Reply  |  Post Message  |  Messages List  |  Start a Board

I will admit to not entirely understanding how politicians think or why they do what they do. Still, Oracle's suggestion that the governor decided not to launch the online insurance application to the public in February because it wasn't politically convenient to do so is an odd theory. By February, the state was already months late introducing functionality that was supposed to go live on Oct. 1. With every passing day, the embarrassment became a little worse until the state wound up alone at the end of the open enrollment season as the only state never to have enrolled a citizen in an insurance plan online. And we're supposed to believe the governor let that happen, just so he could shift more of the blame onto Oracle, rather than himself? He and his administration have caught plenty of blame for this fiasco and the intensity of that blame only got worse as time went on. The way this played out also subverted one of his administratiion's major policy objectives.

Tell me if you disagree, but I don't see any political advantage in letting the project fail as badly as it did.
Reply  |  Post Message  |  Messages List  |  Start a Board
Editors' Choice
Hot Topics

11 Ways DevOps Is Evolving Lisa Morgan, Freelance Writer,  2/18/2021
White Papers
Why Add Security to Your Skill Set and How to Do It
How Secure Are Your Endpoints?
Enabling Enterprise Resiliency Through Cyberthreat Detection
How Hyatt Eliminated Bot Attacks Without Impacting their User Experience
Sunburst: Impact and Timeline