In this excerpt from his book "Where Does It Hurt? An Entrepreneur's Guide to Fixing Health Care," Athenahealth CEO Jonathan Bush addresses the conflict between government and disruptive innovation in healthcare.

Athenahealth started as a chain of birthing clinics struggling to get insurance claims paid. This story, excerpted from "Where Does It Hurt? An Entrepreneur's Guide to Fixing Health Care," follows the company's pivot to cloud software and business services.

By the time summer 2004 rolled around, it had been five years since we exited the San Diego birthing business. We stopped hiring midwives and started recruiting software engineers. We were an Internet business, and those investors who used to run away screaming at the very mention of my name promptly rushed back with fists full of dollars. The dotcom bust came a year later. But it was barely a speed bump for the new athenahealth. That same year my cousin George was elected president. He was a funny, charismatic figure from my youth, but I hadn't seen much of him since.

I was now the CEO of a rising medical data company. We built automated systems to handle the administrative chores for thousands of medical practices. They didn't buy anything from us. Instead, they subscribed to a service on the Internet. This was what would later be called a cloud-based service, but in these early days of Internet era, we were still searching for a name for it. My partner Todd [Park] used to say in speeches that he would give Polynesian fruit baskets for life to anyone who came up with a single name for the combination of software, knowledge and work that we were selling. We had moved back east and had a new headquarters in a historic brick armory building along the Charles River near Boston. Our future looked fabulous, except for one problem: My cousin, the 43rd president of the United States, was about to sign a bill that could destroy us. 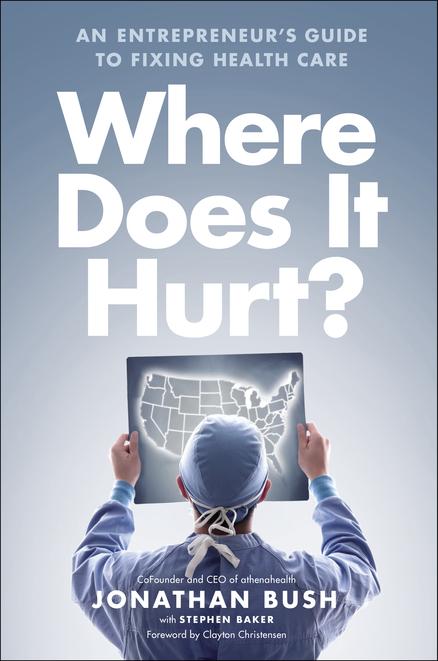 This bill, like so many government initiatives, stemmed from the best of intentions. The idea was to encourage the migration of the health care industry from cumbersome binders full of paper to electronic records. How was this to be accomplished? Well, hospitals and doctors were forbidden by so-called anti-kickback laws from exchanging services, information or products of value with each other. The bill before Congress in 2004 offered a regulatory safe harbor for hospitals to provide doctors with all the digital technology the bureaucrats could think of: servers, software licenses, and training. That was absolutely the right answer ... for 1982. The long and short was that hospitals could buy all the old stuff from our competitors, but none of the new still-to-be-named services from us. As often happens, the technology was advancing much faster than the law.

I caught the shuttle down to Washington and commenced lobbying with the fervor of a man with a gun to his head. I raced up and down the marble halls of Congress, looking for someone, anyone, who would take the time to learn why this bill was so very wrong, so backward, so devastating, so lethal -- at least to athenahealth.

But let me tell you, if you walk into Congressional offices sputtering about a clause in a bill that practically no one has read, something that has to do with hardware and software and online services, people tend to hurry away, or point you toward the door. I could find no one to pay attention. And as I grew more frantic, I started talking louder and faster. That didn't help things.

Some might find my frustration strange, considering that during this drama my cousin was sitting a mile away, in the Oval Office. Wouldn't a Bush, facing legislative trouble in Washington, contact someone in the White House entourage? The answer is no. Placing a call to him was not even a remote possibility. For starters, it's unethical. It is also politically foolish. It would place him, me, and my company in scandal and bring shame upon our family. I would be much more willing to climb the steeple of the tallest church and bungee jump naked in the middle of the night than to call my cousin. And even if I were dumb enough to make the call, I trust George would have the good sense to tell me to get lost.

At the time of this drama, my fast-growing company employed hundreds of people in Massachusetts. But I could not get anyone on the state delegation to hear my plea. (It's conceivable that my family name was working against me.) Finally, I located a congresswoman who would listen to me. It was Nancy Johnson, a Republican who had been representing her Connecticut district since 1983. She chaired the health subcommittee of the powerful House Committee on Ways and Means.

I walked into her office and saw the 69-year-old congresswoman sitting behind a desk. She was paging through an enormous sheaf of papers. That was the bill. Embedded in that piece of legislation were hundreds, if not thousands, of amendments, earmarks, and wrinkles added by one interested party or another, along with thousands of other details that just landed there by dumb luck. Other items, like the all-important clause "and Internet services," were simply missing. It struck me as I watched her paging through this bill that my drama was only one of thousands, or even millions, that would result from this mountain of legislation. A single detail can throw lives, or entire companies, into a tailspin. It can reroute billions of dollars, turning winners into losers, and vice versa. Government is like the giant with an Uzi. It means so well, but if it gets scared or sad or confused, it can squeeze off 80 rounds without even noticing the bodies falling around it. One single law can put technologies that should have disappeared a generation ago onto eternal life support and close the door on their superior replacements. Now, in the last day or two before the bill became law, Rep. Johnson was committed to

Jonathan Bush is Chief Executive Officer, President, and Chairman of the Board of Directors of athenahealth Inc. He co-founded the Company in 1997 and took it public in 2007 in the most successful initial public offering that year. Today, athenahealth remains one of the ... View Full Bio
We welcome your comments on this topic on our social media channels, or [contact us directly] with questions about the site.

One way forward would be greater transparency not only on the basic costs of health care procedures and tests, but having those costs broken out by state and/or metro areas. While I know such comparisons don't fully capture the quality of healthcare, consumers are flying virtually blind now as it is and can't make informed choices.

Would consumers move from one state to another, based on relative healthcare costs?  Many consumers already make that kind of choice based on income and sales taxes. I did in deciding to leave New York for a less tax-hungry state.  With health care costs eating up a growing chunk of all our incomes, I think knowing the relative cost and quality of healthcare by state can and will become a competitive opportunity for pro-business, pro employment state governors.

Yes, except I expect it will be as much the state medical boards as the state legislatures that will fight to defend their turf right to set their own rules and influence their own lawmakers. Breaking that down will be a long process, unless the federal government gets really active and forceful.
Reply  |  Post Message  |  Messages List  |  Start a Board

Pointing to extreme cases doesn't prove your point. So the only time you go to a doctor is when you have a heart attack or some other emergency? There's no potential for more competitive pricing when it comes to such things as blood tests, basic exams, X-rays, and vaccinations? We're already seeing market alternatives emerge in those and other areas, but as long as the government or some insurer picks up the bill, isolating the consumer from the cost, costs will continue to soar. People will continue to let their doctor run a barrage of unnecessary tests. They'll continue to run to the doctor every time they have the sniffles. There needs to be more of a connection between the consumer and the cost. Paying my taxes is a need, not a want, too, but I shop around for a good, cost-effective accountant because the government or my insurer isn't picking up the tab. We won't shop for all medical services, of course. But we need to start putting some pressure on medical practices to become more efficient.
Reply  |  Post Message  |  Messages List  |  Start a Board

The tale of an specialist in Florida being technical able via the Internet, but legally unable by law, to diagnose a case of Merkel Cell Carcinoma in a patient in Wyoming, is a sad example (on page 4 of this story) of how state regulated healthcare "subverts the promise of the information economy," as Bush puts it. It's also a reflection of the needless complications that compounded problems for the Affordable Care Act Health insurance exchange.  Clearly the country would be better served with more interstate healthcare competition.

Yes, it's self-serving. He wouldn't have written a book that doesn't serve his company's interests. But he nonetheless raises some excellent points. The key here is his thesis (and it's not an original thesis) that healthcare costs will continue to race ahead of inflation unless insured consumers have a financial incentive to shop for lower-cost care.
Reply  |  Post Message  |  Messages List  |  Start a Board

What do you think of Jonathan Bush's analysis of the structure of health IT regulation? Accurate or self serving? Partisan or practical?
Reply  |  Post Message  |  Messages List  |  Start a Board
InformationWeek Is Getting an Upgrade!