Clinton tells HIMSS conference that it's time to take politics out of healthcare, and many health IT experts in audience agree.

Hillary Clinton addressed her keynote comments at  HIMSS14 to healthcare technologists and entrepreneurs from both sides of the aisle, but many who stood in line almost three hours before conference room doors opened were fervently pro-Hillary.

That was apparent by comparing the volume and frequency of applause between the packed, main conference room and the busy overflow space, which had seats available. The crowd in the main room clapped more often, longer, and much louder than those in the spillover space. 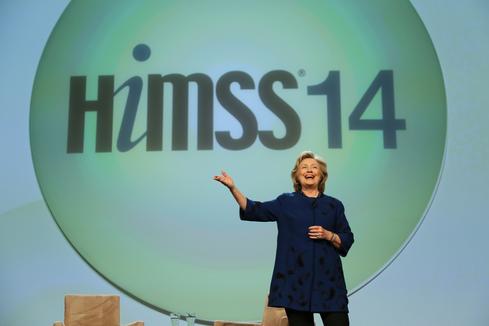 Some attendees were on their way home before Clinton's 4:30 p.m. keynote on Feb. 26. Others made phone calls, took down exhibition area displays, or set up private meetings. At least one IT executive didn't want to see another Clinton keynote at the event; Bill Clinton took the podium in 2013. Still, many of those at the session appreciated Clinton's retrospective of healthcare IT and her gratitude to HIT professionals for toiling to make the vision possible.

"I think she did a very good job appealing to her audience," said Stacey Shagana, health insurance specialist at the Centers for Medicare and Medicaid Services. "She tied in all  her positions, from wife of the governor to secretary of state."

Clinton appeared confident and knowledgeable about both healthcare and HIT, said Julia Weidman, a marketing professional at Carestream Health, Rochester, N.Y. It's important to move healthcare IT out of politics, she added in agreement with one of Clinton's main topics.

"I liked her point, 'Washington decisions are made in an evidence-free zone... evidence-based policy decisions are needed,'" said Weidman. "She's right that people of good faith must work together and leave point-scoring at the door."

In fact, Weidman wouldn't be surprised if Clinton runs for president in 2016 -- in part because the year of rest appears to have done Clinton good and, in part, because part of her keynote singled out the 17- to 28-year-olds when she discussed the future. "A possible target demographic for '16?" mused Weidman.

Attendees anticipated -- and got -- a polished, fluent speaker at ease with her audience. Some hoped, however, to learn more details about potential new legislation, funding, research initiatives, or public-private partnerships -- and they were disappointed.

"I was expecting more insight into what's to come," said James Bowser, a longtime HIT professional. "When the questions moved to what's going on in Kiev, that's when I left."

But others enjoyed the broader experience.

"I personally loved the interview portion and was fascinated by her insights into world politics and the capture of Bin Laden," said Vicki Estrin, vice president at c3/consulting. "I also appreciated her insights and observations regarding health reform. Love her or hate her (I am personally a big fan of hers), she is relevant and I thought her message of acceptance, compromise, [and] collaboration regardless of your political beliefs was right on the money. We are not going to get healthcare right in this country if we don't get past the blaming, rhetoric, factoids, etc., and actually come together to solve the inherent problems in the system."

Not everyone found the keynote quite as inspiring.

"It was much more of a pep rally than anything else," said one clinical engineer from a Texas hospital who did not want to be identified.

Alison Diana is an experienced technology, business and broadband editor and reporter. She has covered topics from artificial intelligence and smart homes to satellites and fiber optic cable, diversity and bullying in the workplace to measuring ROI and customer experience. An ... View Full Bio
We welcome your comments on this topic on our social media channels, or [contact us directly] with questions about the site.
Comment  |
Email This  |
Print  |
RSS
More Insights
Webcasts
Cybersecurity's Next Wave - What Every Enterprise Should Know
Strategies for Success with Digital Transformation
More Webcasts
White Papers
A Technical Deep Dive on Software Exploits
Full Body Exposure: CybelAngel Analysis of Medical Data Leaks
More White Papers
Reports
2021 Top Enterprise IT Trends
How IT Security Organizations are Attacking the Cybersecurity Problem
More Reports

The way things stand right now, IMO, the success or failure of the ACA will be determined on a state by state level. If more states/people like what they what they are getting versus hate, that's the first piece of evidence that will propell the finetuning that proponents expected to happen in the first place.
Reply  |  Post Message  |  Messages List  |  Start a Board

She's 100% right that partisan political bickering is only damaging the discussion of how to deliver healthcare in a cost-efficient and universal manner. Love this quote: 'Washington decisions are made in an evidence-free zone... evidence-based policy decisions are needed,'

But at this point, does anyone REALLY think we can separate nasty politics and the ACA? Until we do, fine-tuning is going to be a problem.
Reply  |  Post Message  |  Messages List  |  Start a Board
Editors' Choice
Hot Topics